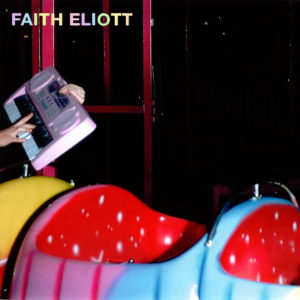 Released as a stop gap between demo recordings and entering the studio to record something properly, this EP from Edinburgh based singer-songwriter Faith Eliott was recorded live to tape in one afternoon at The Happiness Hotel in Leith. Although Faith recorded these tracks quickly and out of necessity (in her own words, “to archive songs that have been disappearing from setlists”), the organic nature of the recordings really brings out the best in her songs. For here are four tracks that are hugely professional and yet still retain a little of that spirit that lots of great acoustic music needs if it is to remain true to its roots. Various studio overdubs could have made these songs fuller, but not necessarily better.

‘Galapagos’ introduces the world to Eliott’s stripped back style via a combination of heavy strums and incredibly quiet and muted riffs. The push and pull between the dulled sound and the crispness of the high notes is accentuated by the live recording. Filling the spacious arrangement, her voice calls and cries with the style of her forebears, a slight trill in her delivery harking back to Shelagh McDonald, while the lesser affected and almost spoken moments tap into her youthful re-imagining of classic folk. Surprisingly, ‘Fledgling Bones’ is even more minimalist, with her guitar throwing out occasional strums allowing the voice to carry the bulk of the melody. The thin sound in her voice gives everything a sense of vulnerability, the recording occasionally making this track feel like something cast aside from a Vashti Bunyan session from 1969. The stark and empty approach is very enjoyable, never pushing forth, nearly always requiring the listener to work for the reward. Each few bars seems to draw in the ear ever more…and while the resultant sounds might be slight compared to, say, Lisa Hannigan’s work or Amelia Curran, it’s surprisingly enduring. It’s also got a sharp feeling of contrast: the music weaves in a lo-fi acid folk manner, rarely showing its teeth, but the lyric within shows a starkness and honesty that such music rarely supports: “I returned home to pluck the eyes from the watchmen who for so long stood guard over me…your room has become a wild terrain where the cats are scab eared kings that reign”. Matching the music and lyrics, it seems by turns questioning, bitter, lost and at the same time celebratory of love and loves lost. Of course, it might also be none of those things. Although fairly minimalist, it’s a contender for this EP’s best track.

‘Heartbreak’ works some sharp fingerpicked musical motifs, with the natural surroundings of the recording allowing the buzz of the strings to be heard. Lyrically, it’s far more self explanatory, but even given such a well worn topic, Elliot’s clear voice and gift for an open narrative ensures it doesn’t ever feel too worn by time. The sparseness of the arrangement recalls the early 70s acid folk movement once more, which seems more fascinating when juxtaposed lyrics set in the present (at this point some forty years down the track), but the real draw comes from a voice maintaining an absolute purity. Finally, ‘Katie’ trades in the more ethereal elements for a simply strummed overly wordy style. “I’m not who I thought I’d be at sixteen and at twenty–six the world still makes me dizzy” is part of the advice given to the titular Katie, someone going through a wobbly patch. With Elliott looking at different aspects of life, worrying that “the internet makes [her] stupid” and how it’s worth “looking through the rubble for a diamond of truth”, it seems part confessional, part worrisome, part accusatory and part drawn from a rambling train of thought, but for those who’ve ever loved Dar Williams’s early flights of fancy, this might strike a chord somewhere.

Bridging the gap between half-remembered and often ignored folk from the early 70s and the enduring underground of a twenty first century present, these songs have a quality that seems to soak in so much tradition, yet at the same time allow the individuality of Elliot’s own voice to remain clear. With these songs, she shows off a pure and appealing vocal style, but even better skills with wood and strings. Although essentially a field recording made in single takes over the course of just a few hours, for lovers of acoustic sounds, singular voices and confessional tales, this is a highly recommended listen.