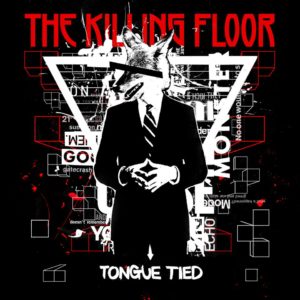 A sad state of affairs, indeed. Within days, the UK economy crashed and there was a huge increase in scary racial attacks. Those who wanted to remain part of the EU foretold this would happen and yet it still came to pass… On top of that, the government had a major reshuffle and the country ended up with a new Prime Minister. Instead of using the time to fight back and become strong opposition, the opposition, meanwhile, appeared to tear themselves apart with various in-house squabbles.  We were living in the darkest times since the 1980s.

With that as background and with the cloud of political and social unrest hanging over the summer like an unwanted full to bursting nappy, London’s Killing Floor couldn’t have chosen a better time for releasing their ‘Tongue Tied’ EP. It’s four songs present themselves with a great strength and hit just as directly lyrically, with corruption, social attitudes and strength in unity high on the agenda.

The lead track ‘Corruption Capital’ kicks off with a hard message that “we’ve reached boiling point / It’s time to rise” and goes on to suggest that together we can help bring “a brighter dawn”. It’s not always clear whom the corrupt are, but it’s a fair bet to suggest this is an attack on London’s bankers, the overpaid and those who are responsible for taking even more from those who aren’t so affluent. Musically, it’s an absolute belter, with a heavy beat and a huge swagger, topped by distorted bombast in the guitar department, with huge riffs joined by deceptively busy leads. If, on paper, that sounds a bit like Muse, you wouldn’t be far wrong…but thankfully it comes without any of the over breathing, or ear bleeding whining that makes that band’s music such a chore to listen to. ‘Tongue Tied’ is worth hearing purely on the basis of this track.

“Hold your head up when your back’s against the wall…strength from within” suggests ‘Backs Against The Wall’, a great and melodic alt-rocker that takes cues from the sounds of Asking Alexandria at their most commercial crossed with an almost Foo Fighters-esque accessibility. Lyrics aside, this number shows that The Killing Floor have a collective ear for a strong melody, with everything driven by ringing guitars, while the vocals carry the bulk of a great tune. In terms of what it does, it’s great: it’s one of those tunes with a radio friendly edge that grows over time. Taking a sharp edged rhythm guitar and lots of stops, the intro to ‘Catalina’ (not a Descendents cover) invites much pogoing, before dropping into a superb alt-rock tune that takes influence from a few forgotten emo bands before taking another Foo Fighters inspired chorus melody and wedging it between your ears. It’s not all driving rock sounds here, either; during a reflective bridge, the bass rises and fills space with a huge and weighty sound, before a few scattered rimshots from the drums lend extra edge, One more visit from that chorus and it’s a job well done. If ‘Catalina’ teased with pogoing, ‘High’ finally delivers on such promises with the band lurching through a high energy grunge punk hybrid that has all the unrestrained edge of a Mudhoney classic tempered by a few extra alt-rock melodies. It draws heavily from the 90s, but sharp lead guitars pepped by effects pedals make everything feel more contemporary. Two and a half minutes of blistering riffs and sweat; you can’t argue with that…and with such boundless energies, The Killing Floor bid us goodbye.

Okay, so their socio-political messages mightn’t be as direct as, say, Rage Against The Machine’s, or even the Manic Street Preachers‘, but in terms of the every day fight for survival – as opposed to angry socialist, sneering pseudo-intellectual rhetoric – The Killing Floor show they have more than a conscience than so many of the alt-rock bands who are merely out there to rock hard and make their audiences feel good. There’s a place enough in the world for them, too, as we all need good times…but for a potent mix of thoughtful song writing, big riffs and hooky melodies, The Killing Floor have all the important bases covered. ‘Tongue Tied’ might have a misleading title, but it comes highly recommended.