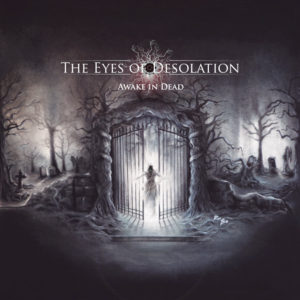 Taking elements of gothic metal, a touch of doom and a pinch of black metal on their 2016 release ‘Awake In Dead’ Costa Rica’s Eyes of Desolation whip up a dark storm that’s powerful and unsettling, yet more accessible than many metal bands veering on the extreme side. Between them, not only can they play very well, but also understand that a strong melody – even one that’s oppressively dark – can go a very long way with regard to not only enticing people to listen, but also keeping their attention and inviting those all-important repeat listens. In terms of dark, gothic metal sounds, this EP has all you’d hope for…and more.

‘Waking Death’ sets the scene with a slow, relatively clean guitar riff repeating and slowly building tension, accompanied by a moody bass, until a hugely heavy riff dominates. The slow riff that ensues is a little sludgy, but captures more than a little of a gothic edge. From within the heaviness, gentle keys ring out with clarity; it’s a sound that although simple, is very effective. Once this has found its feet, it’s out with the big guns as the guitars drop into a downtuned chug, over which a scratchy black metal infused vocal does its bidding. Not wanting to go too far down the path of blackness, the slower riff makes a second appearance, joined by the bell-like keys playing through a counter melody that could have been on a classic Type O Negative recording. Having already given the listener a little of everything, the band decides that’s not quite enough…and the extreme metal vocals shift to a gothic croon while the drums hit upon a tribal style, all before chiming metallic guitars close what has felt like a truly epic track. Another lengthy workout, ‘Fighting For Your Cause’ starts slowly, as slightly atonal guitar chords meet a heavily treated vocal creating something that while interesting at first, soon becomes rather ordinary. At the point where the band are ready to fully present themselves, however, there’s much to love as a slow and heavy riff churns like older Katatonia and My Dying Bride numbers, the slow pace allowing bassist Javier Murillo to crank out a very threatening style. A clean vocal – an expectant, somewhat expected croon – is more than adequate if a little too typical, but a blanket of keys is on hand to add to the overall atmosphere. Already having demonstrated his ease with a few riffs, guitarist Chus Mora wanders into something very melodic as he compliments the heavier elements with some great, soaring lead work and, eventually, with the band adopting a faster pace for the big climax, his tone of riff really suits the sub-Type O Negative workout. Aside from the treated vocal – perhaps overused – this could be the EP’s best track in terms of both musicianship and broad scope. Surprising indeed for something that seemed so ordinary at the outset.

A lot more accessible, ‘Crimson Sky’ begins with a multi-layered riff and upbeat rocky sound. This has a very 80s bent, before following through with deep staccato riffs that create something hard and melodic, not a million miles from a heavier Paradise Lost. Charlie Varela revisits his earlier croon, but this time delivers it was far more intent. While his tones are well suited to the music – eventually stretching out into some great chugging sounds topped by keys – it’s sometimes clear his untrained style is a little wobbly. It’s always obvious where he’s going, but in terms of melody, he’s no Peter Steele or Nick Holmes. No matter, though, since the music is always impressive and Mora’s guitars always come loaded with a dark heaviness that’s a match for so many better known musicians; the combination of his sledgehammer approach and the haunting keys carries this tune to glory. Hanging on to an 80s style, ‘I Found My Place’ starts off sounding like a very heavy retelling of a synth-pop hit, before doing a complete u-turn into mid-paced darkness. The verses of this number represent the most gothy elements of EOD’s core sound: the vocals, deeper than before, are barely audible beyond a low moan and, with little other accompaniment, Murillo’s bass work is superb, churning out larger than life bottom end sounds. For the following verse and subsequent chorus, everything swells to create a wall of sound, the gothic touches meshing with some classic doomy riffs, the vocals dominating with a shouting edge and occasional black metal unfriendliness. When going at full pelt in this way – as with parts of the opening track – the band’s potential is easy to hear and this is a tune which should appeal to many fans of the gothic style.

This release may only feature four songs, but it packs a lot into a short playing time. Solid riffs, a very dark outlook and great production for an independent release all come together to create something that’s well worth a listen. With ‘Awake In Dead’, The Eyes of Desolation more than prove that although gothic metal often works to familiar formulae, when done well, it’s a style that never gets old.