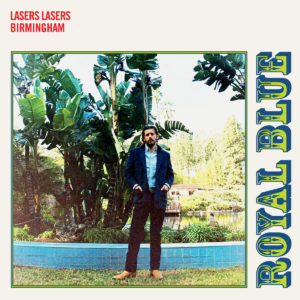 Helmed by singer-songwriter Alex Owen, the oddly named Lasers Lasers Birmingham are a country influenced band residing in Los Angeles. Their first EP – released in 2004 – wasn’t so much a band work but an outlet for Owen who played and sang almost everything. This second EP finds the man himself with a full band in tow and the resultant four tracks certainly make the best from the talents of all concerned.

The title track leads the way with a very traditional sounding country shuffle, as a slow beat dictates a “crying in your beer” style workout. If you like older style country music, there’s much to love here from the outset, but there’s also a warmth to the recording and performance that occasionally suggests that Owen might not always play his country sounds as straight down the line. The maudlin arrangement – peppered with a Garth Hudson inspired organ sound and a full compliment of steel guitars – ambles pleasantly enough, but upon reaching the chorus it delivers a hook that’s rather fine. Over the brilliantly established sounds paying homage to the past, Owen – possibly with tongue in cheek – croons about seeing life through a blue “monochrome filter that [he’s] not used to” and how these days he’s “not inspired to smile”, almost as if he’s taking some clichéd country pre-conceptions and hitting them for a home run in the post-modern stakes. A few listens unveils more enjoyment than first appears; that’s partly down to Owens’s overall enthusiasm for the style, but mostly for his hired help, since the band on this track really come across as consummate professionals. ‘Hard Man To Please’ switches the tempo completely but never loses sight of it’s old heart, presenting an upbeat country workout that sits somewhere between Johnny Cash and the more frivolous side of the youthful Nanci Griffith. Naturally, John Schreffler, Jr’s pedal steel goes into overdrive, the rest of the band follows suit and in a few short minutes, the once reflective sounds of the opening track get all but forgotten as we’re taken hold by a gen-u-ine hoedown . It’s the EP’s most disposable tune by default but, again, in terms of style, it’s perfectly executed; Owens sounds like he’s having fun and if this kind of square dancin’, truck drivin’, cattle rustlin’ uptempo stuff is your bag, it’s likely you’ll be more than happy to be dragged along for the ride.

At the point you might feel the basis of this release is just too rooted in old country traditions, The EP’s best tune, ‘Shedd Aquarium’ comes like a roots rock suckerpunch. Bringing the mood down to a more sophisticated alt-country amble, the tune presents a superb blend of steel guitar, smooth bass lines and old world tack piano that echoes through the cracks like the ghost of Richard Manuel. The bass, with a bigger presence, joins some fine, fine harmony vocals and, by the midpoint, with everything descending into wordless harmonies, you might just find yourselves thinking that this is one of 2016’s best tracks by anyone…from any genre. The faultless production serves the band well and the human spirit within Owen’s song writing is allowed more room to take hold – seriously, this is one of the best things The Jayhawks never wrote. Last up, ‘Any Way You Slice It’ is even more reflective, a strumming acoustic affair that isn’t so far removed from Neil Young’s works during his late 70s country forays. The simple arrangement is afforded an equally simple production, where it’s almost possible to hear floorboards creaking as the natural voice springs into life. There’s a typical sly humour here too, with Owen reflecting how on Wednesdays he’s “on the streets and feelin’ mean”, how “karaoke dies when [his] confidence comes alive”, a scenario suggesting that enough drink will allow him to “tackle The Supremes”. It’s so hard not to like this…

It’s great how each of these tracks manages to tackle country music from a different angle. It shows Alex Owen to be a very well-rounded talent as well as a gifted songwriter and lyricist. It also demonstrates a love for the old ways as well as a desire to pull in new ears – and in ‘Shedd Aquarium’, there’s even a slice of pure perfection. With so much ground covered, if you have half an interest in roots music or Americana, it’s almost impossible not to find something to like. ‘Royal Blue’ is one of 2016’s most welcome surprises.