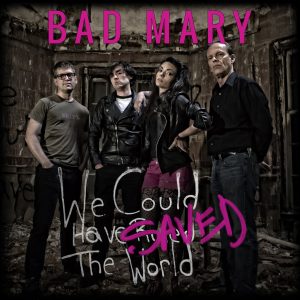 New York’s Bad Mary were not exactly well known by the end of 2015 – even by internet standards – but they already had an enjoyable album and potentially brilliant EP to their credit and had worked phenomenally hard at building a grass roots following. For the female-fronted punk-pop/hard rockers, the world was still very much theirs for the taking.

While their third release, 2016’s ‘We Could Have Saved The World’ might not be as edgy as The Distillers or as energetic as Tilt, in terms of radio friendliness, Bad Mary have a great deal working in their favour. Guitarist David Henderson knows how to work a riff for melodic impact without losing any spark and vocalist Amanda Mac has a great voice. From the ground up on these six songs, the band displays a potent mix of accessible melodies and sharp riffs, while their ability to temper their punky moments with tough hard rock should be enough to reach out to at least two different fan bases.

Beginning with the kind of riff that ruled the punk-pop world in the mid-90s, ‘Creeper’ recounts a messy break up and a stalker, a tale retold with a huge and sneery posture. Amanda’s natural style collides with a New York attitude, abetted by a pogo-friendly verse powered by Mike Staub’s tough, rattling bass work. It then takes an odd move, slowing down into the chorus to make room for a couple of lead guitar flourishes, but this collision of the two styles works and is something that’s clearly important to the band. Mixing the punk with a little rock and a counter-vocal, it soon becomes a number that has a little of everything, yet without feeling forced or cluttered. That’s a good start, but things are about to get a whole lot better. The EP’s stand out, ‘Marz Attaqx’ works a terrific stop-start riff to kickstart a wacky tale of human destruction via alien invasion. As the tune progresses, the tightness within the band becomes very obvious and everything comes together excellently. By the time the stop-start verses eventually morph into melodic punk with a bouncing edge, Mac’s voice really comes into its own…and for fans of bands like City Mouse and The Nuts, this is required listening.

Slowing down, ‘Trouble’ is a number more of the swaggering hard rock variety, with a meaty chord progression and a quasi-glam stomp providing the bulk of the tune. This allows drummer Bill Mac room enough to show off a heavy hitting style in addition to throwing in a couple of percussive quirks, while Amanda reaches for the higher end of her vocal range. It’s the guitars that win out, however, with constantly tough grooves and an eventual careening solo that wouldn’t be out of place on a Velvet Revolver disc. In fact, there’s a lot about this enjoyable tune that’s reminiscent of Duff McKagan’s Loaded – at least musically – so that’s no bad thing. In even more of an unexpected turn, the (almost) ballad ‘Cloud 9’ features an opening chord progression that sounds as if it could slip into U2’s ‘All I Want Is You’ at any given second. Before too long, though, it very much takes on its own identity with tough chords and a slow beat, driven by Bill’s heavy drum sound. Taking in some great bass work and another hard rock solo along the way, it has a little of everything for that all-round appeal, but the number truly belongs to Amanda, working the lyric with a pleasing crying edge to her voice. It’s let down somewhat by an overly repetitive hook, but overall, it’s brimming with good intentions.

Moving back into upbeat sounds. ‘Meanwhile’ hits hard with fast riffs and a fun atmosphere, as Bad Mary channel more influence from Tilt and City Mouse on their most traditionally punky workout this time around. As basic as it might be, it’s also one of the EP’s most enjoyable tracks, especially when allowing for the fact it’s got “live set belter” carved deep into its core. Taking cues from an older New York punk aesthetic, ‘When You Think of Me’ mixes up punky edges with some tough hard rock guitars, leading to a trashy sound that’s drenched in attitude. Although more melodic than ‘Meanwhile’, it doesn’t really add much new, but it’s still a great showcase for the band – and again, makes Amanda’s natural talents more than obvious.

Overall, there’s very little that could be called filler on this handy sized and easily digestible six tracker, with all of the material ranging between sounding good to very good, often in favour of the latter. Their Police cover (as heard on the previous release ‘Killing Dinosaurs’) trumps the lot, of course, which might suggest that Bad Mary still have some fine-tuning to do before they’re able to take on Paramore and their ilk in the big leagues, but even so, ‘We Could Have Saved The World’ offers plenty to enjoy.