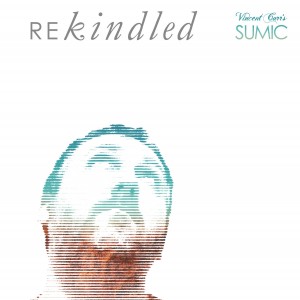 Approaching the writing and recording of his fifth album, Vincent Carr stumbled across that age old problem all artistes face, whether a musician or writer: that potential stumbling block being, in his own words, “how to remain true to yourself, without repeating yourself”. With that in mind, although largely instrumental, ‘Rekindled’ almost feels thematic in its aim to reconnect; it’s music has a slow burning retro style that celebrates a love of things with an old spirit, while simultaneously looking at things afresh.

Almost acting as an elaborate intro into Carr’s world obsessed with castles and folk traditions, ‘The Hall of The Bright Carvings’, unveils a pastel shaded scene, as acoustic guitars strum, a slow chord progression aids the peaceful wander and a lovely acoustic lead plucks a thoughtful melody. After several bars of this simple tune a folk jig emerges, showing off Carr’s gifts for the finger picked guitar; additional mandolins increase the folk intents and by the time everything comes together, the feeling of tradition is very strong, almost even Fairport-esque. Adding a couple of rock flourishes – cheifly via electric guitar – the intro to ‘News Just In’ is a dead ringer for something from Jethro Tull‘s folk rock trilogy, but soon finds more of it’s own identity thanks to a solid bassline and some wah-ed lead guitar. The sound of everything together unleashes a world of seventies prog rock gentility – showing more of Carr’s influence via his own talent, though the wandery mood is perhaps more Moody Blues than the more obvious touchstones – and it’s lovely. The track’s second half does a complete about face and pushes the proggier elements somewhere unexpected funky, flourishes of middle period Genesis jostling against more fuzzy, wah-wahed guitar. Here, Carr sounds more at ease than ever, teasing with his own funk inspirations while laying down some sharp guitar. Whether solo or multi-tracked, his guitar work is impeccable, always strong enough to forgive the programmed rhythm track. With two separate ideas forming to make something that seems bigger than its whole, this number quickly becomes the album’s highlight.

Taking a strong rhythm guitar line – one that quickly recalls a segment of Pink Floyd’s ‘Dogs’ – the title track moves into a more haunting space. The tune’s own identity starts to grow from that root, with Carr overdubbing a crisp, semi-folky lead guitar and a deep bass sound that adds a genuine contrast to the acoustic work, constantly threatening to pull the tune into a questioning darkness. It is here, with the help of a lyric formed some four years previously, the album’s only vocal makes an appearance. Wordless harmonies are followed by a slightly dour performance, with Carr’s sad toned delivery very much in sympathy with the moody sound. He’s not the greatest singer in the world, but it’s evidently clear that he writes with his own voice very much in mind, so everything works better than first it seems. With a hard folk tune taking hold for the second movement, an almost jig like melody provides a very strong counterpoint to the main verse; some listeners will hear traces of influence from Mike Oldfield, others a few nods to Tull’s folk-rock opus ‘Songs From The Wood’. While a bit of a comedown, there’s just enough here to appeal…and it’s clear the musical ideas were strong, even if the performance sometimes wavers.

Side two – in old money – is taken up by two pieces of music which Carr subtitles “Two Pastoral Scenes with Castles”. The first, ‘Starlight’ is a short acoustic piece and another album highlight, with playing that accentuates the hard sound of the singularly plucked strings. The melody presents itself much like a half forgotten tune from a seventies UK childhood, with a strong (although almost certainly subconscious) influence from Freddie Phillips’s Trumptonshire themes. Perhaps more than any of the other tracks, this really brings out Carr’s pastoral musical interests, while ‘Norham Castle Sunrise’ is a lengthy and repetitive workout, mixing folk, prog and ambient to create something so gentle it almost comes as a surprise. It’s main musical motif sounds as if it were based on a brass fanfare – again, (sub)consciously linking in with castles and something very English – while the sounds of birdsong reinforce the sense of calm. Linking everything, more picked guitar lines lean towards the folky and gentile; the counter melodies sometimes recall things you’ve heard on this album before. At seventeen minutes, it’s rather on the long side and possibly could have been trimmed, but the length sometimes acts as a device to draw you in even more. It won’t appeal to everyone, but there are pleasant melodies dropping in and out of the more repetitive elements. In many ways, this the culmination of the various musical sketches and ideas within SUMIC’s other works.

A gentle work, ‘Rekindled’ should appeal to fans of folk rock and light prog. The recording may sometimes give away many of its homespun origins, but the bulk of the ideas are solid and the playing often rather fine. If you’re able to immerse yourself fully, it’s like entering an alternate universe of unheard Anthony Phillips demos. Approached with open ears, Carr leaves behind a work that feels like part of an extended musical family with Tiger Moth Tales and Robert Reed…sounds that call out to the underground scene while taking a few obvious cues from 1973. Pastoral, cult and so very English: ingredients enough to get certain quarters of the prog community interested…