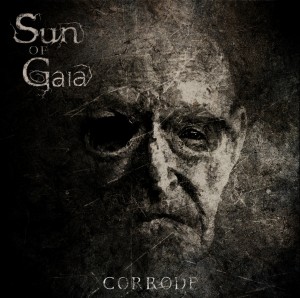 An elaborate intro, ‘Corrode’ fades in slowly and is a showcase for the twin guitar set up – one creating a melodic, almost circular riff; the other dropping some heavy, djent influenced rhythms. This leads to a very natural sound, with the lead adding a melodic bent and, with that, ‘Endless Wake’ crashes in with a very hardcore sound. The riffs move farther into the djent sphere at first, thanks to some brutal downstrokes, before injecting things with a hard groove and a few bars of melodic death metal. A verse or so into this track and their fusion of metal sounds is fairly brutal, but always seems to strive to be more than just pneumatic noise. At the point where the track seems settled, the heaviness totally disappears and the guitars take on a jazz fusion solo, backed by equally mellow drums and hard funk bass. Anyone who says they expected things to take such a surprising turn is a liar. For the last verse and chorus, though, things revert to the intense and a repeat of the groove from the opening verse takes hold. With a variety of vocals – from the shouty to the really shouty – and a sledgehammer riff to match, it’s clear Sun of Gaia don’t mess around.

‘The Cold’ is a little straighter, bringing a bottom end riff that chugs beneath a hard and dirty guitar sound. The ringing noises coming from the lead rarely opt for the most obvious tones, but the cold melodies which emanate are striking. The real force from the opening of the number comes from drummer Rory Amoy, a man who plays with plenty of weight, but is adept enough to drop a few jazzier fills in with his death metal force. The music may sometimes be a little less complex, but in terms of extreme metal, it’s got a little of everything that really counts and vocalist Lachlan Odell attacks each line with a genuine throaty venom. Showing off a different side to the band at first, ‘Haunted Eyes’ blends a clean, jazzy guitar with a full and heavy bass sound, before everything ploughs ahead with a primal concrete sledge of a riff that falls somewhere between ‘Trendkill’ era Pantera and ‘Ashes of the Wake’ by Lamb of God. Slower riffs allow more of a groove to set in at times, while a jarring lead guitar makes attempts at shoehorning in progressive death grinds and squeals and a clean-toned sound sits (not entirely comfortably) somewhere within. There’s so much going on here, complex flourishes etcetera, it’s not entirely possible to take it all in at first… Obviously, from a huge metal perspective, it’s pretty awesome, and when aided further by a growling Randy Blythe-esque voice, it’s a contender for the EP’s best track.

With a suitably dark intro, ‘Blinding Light’ combines heavy bass drumming with a hard guitar sound, leaving the lead to the bass. It’s a striking sound, with Nathan Churches churning out dark, almost gothic melodies, before the main thrust of the track takes over, bringing with it more Lamb of God inspired vocals, a dark thrashing riff and a lighter, shrill melody, revisiting a neo-gothic mood. From the purer metal-based perspective, it’s when reaching the mid-point things really take off, with Jacob Poole and Hayden Van Der Lee indulging in busy solos that borrow heavily from progressive metal techniques, before steering the number into a melodic and thoughtful proggy passage where clean guitars remind the listener there’s far more to this band than sheer heaviness. A second solo outdoes the first and following a few bars of riffing that sound like Symphony X jamming with Chimp Spanner, a final growl-heavy verse steers everything into oblivion. If there were any doubt that Sun of Gaia were any less than a hundred percent committed to their art, this ought to sway those feelings. Last up, ‘And The Clouds Cry’ presents eight minutes worth of heavy riffs underpinned by dark drones. In terms of heaviness, it doesn’t add much to the band’s repetoire, but the density of the arrangement is constantly impressive…but still not as impressive as the deep horse noises that appear throughout the main riff. A heady blend of groove metal, progressive death metal and Killswitch-y metalcore, it’s got a bit of everything. Although the duration suggests more of a progressive slant, this is not actually as complex as the EP’s opener; that’s not to say it’s inferior, though: fans of a huge riff will not feel in any way short changed. In all, it’s another example of well played and thoughtful metal…the quality of which Sun of Gaia should be very proud.

Although the bulk of this EP has a hard, filthy sound, it shouldn’t be dismissed as just another metal disc. The interjections of other rock melodies – and more besides – often makes it a surprising and challenging listen, but if you can make it past the vocals to pick apart the extensive musical layers, it’s all very rewarding. It almost certainly won’t be to the tastes of some metal fans, especially those who like things more traditional, but there’s no arguing that Sun of Gaia are a band with big ideas and broader musical boundaries than most. Recommended.