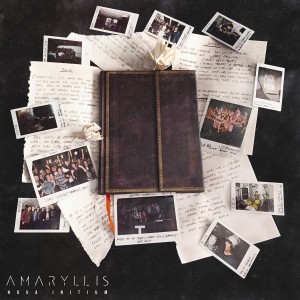 Following two EP releases and their own headline shows in London, UK alternative rockers Amaryllis (not to be confused with the female fronted Polish prog rock band) set to work on a full length which, in the bands own words, had to be better than anything they’d recorded before. It’s always good to encounter a band with a clear sense of drive, looking to push themselves. While that debut – 2016’s ‘Nova Initium’ – often relies on being the sum of its influences over any obvious originality, it’s hard to argue against it being well constructed and well played, especially in the guitar department, since Alex Whiteford so obviously knows how to work some solid riffs.

Lead single ‘Thorn’, while arguably one of the album’s weaker tracks, still presents a solid snapshot of the band’s core sound. Kicking off with shrill guitars throwing out a hard and sharp riff, it’s clear the band means to make a good first impression with the emphasis on aggression, before the main riff adds a touch more melody with a Paramore-esque crunch. The music is tight and promises a great deal in an alt-rock sense, but then frontwoman Sante Moonie starts to sing. At first, her voice is a little jarring – certainly not what you’ll be expecting – presenting itself in a lower register, one that’s not clear at first as to whom that voice belongs to. After adjusting, it’s more obvious that it’s a natural voice, capable of conveying a reasonable amount of presence. While her performance on the verses doesn’t instantly impress, with everyone increasing power and volume into the chorus, it all starts to make more sense. That chorus is great; a chunky affair that sits somewhere between the less angry material from the Marmozets debut and ‘Riot!’-era Paramore, with an arrangement that brings out the very best in Alex Whiteford’s guitar chops. With a strong chorus and familiar Paramore/Tonight Alive inspired sound, once the track ends, the chorus looms large within the memory, and obviously that’s a good thing, even if at a few points later on you find yourselves wondering upon which Paramore album you heard it…

Tougher all round and working some great harmonies, ‘Hold On’ delivers an opening guitar riff that’s not so far removed from Papa Roach’s early work [scary to think that their major label debut is already some sixteen years old at the time of this Amaryllis release] before dropping into a bouncing and choppy verse, where Moonie’s energetic performance really helps push everything forward. With a much stronger vocal, this actually provides a better entry point into the album. The riffs, too, are superior: huge driving affairs – equal parts alt-rock and metal – give Amaryllis a defiant crunch, especially during a loud, crashy chorus and crushing instrumental breakdown at the track’s end. Looking at everything together, while the Paramore influence might be a little too obvious to overlook completely, this track is one of the album’s instant standouts. ‘Basement’ combines a quieter verse and more melodic vocal, resulting in an enjoyable emo-ish number that shows off the best in Moonie’s love it/hate it style, while some of the guitar sounds take on a distinctly 90s lilt. Intercutting the main vocal lines with understated whoahs at first seems like an odd move – one which the band don’t seem keen to follow – but everything comes together in a very strong fashion during the second half, teasing with a couple of dirtier riffs and a huge set of gang vocals revisiting those whoas in a way that could please fans of 30 Seconds To Mars. ‘All We Have’, meanwhile, is more understated, with clean toned guitars and heavy drumming creating a sound not too far removed from that which filled rock radio in the 90s. The music’s very strong, but much like ‘Thorn’, the vocal doesn’t always work. Moonie sounds great when going for the louder notes filling the chorus, but the slightly mumbly, quasi-Tracy Chapman style that fills the verses is most unexpected. A few plays really helps this track sink in, though, and eventually the sunny melodic vibe cutting through those verses (at least musically speaking) is very pleasing to the ear.

Elsewhere, the title track presents itself in two halves: ‘Nova’ first presents a very dark workout, with slow riffs underscored by heavy toms, as drummer Michael Mann stretches out. The densely arranged tune is surprisingly short, but leads nicely into ‘Initium’, where those toms return, but this time allow guitars with delays and a fat bass to take far more of a lead. Here, Amaryllis trade in their usual emo rock for a far denser sound, though never seem to lose too much of their melodic edge. Faced with the slightly crunchier backdrop, Moonie ups her game to suit, delivering a natural but full-bodied performance largely hinging on a chorus hook which, while not as smart as some, still retains just enough of the band’s commercial potential. Closing the album are two water-themed pieces, ‘Drown’ and ‘Rain’. While linked thematically, unlike ‘Nova’ and ‘Initium’, no further relationship should necessarily be sought, since these tracks could almost be the work of two different bands. ‘Rain’ is soft, jangly, occasionally Cranberries-esque and very much a showcase for Moonie’s voice, with some lovely guitar tones fleshing out the sound, but ‘Drown’ counterbalances the more thoughtful style with a monster of a riff at the outset, before falling away to partially reveal a multi-layered tune. Chorus-wise, with a multi-tracked vocal that almost moves into a call and response, the sound is cool even though the hook doesn’t really stick. The chorus coming up a little short just makes the riffs more of the dominant force and for the better part of four minutes, the guitars barely let up. Those looking for loud, no-nonsense alternative rock will likely get a kick from this arrangement right from the off – riff-wise, it’s a great example of Amaryllis really rocking out.

‘Nova Initium’ is interesting, in that when hearing individual tracks, it doesn’t seem to be anything more than bog-standard alt-rock. Granted, the music isn’t that original, but it’s very well played. Maybe its the overarching fascination with flowers and water that somehow subconsciously suggests you need to hear this album in one sitting for best results; even if not conceptual, it certainly feels like the whole is better than the sum of the parts. Approaching the album as a whole work, the way the tracks flow – along with a couple of great choruses – makes it much better than it at first appears. If you feel that on the basis of ‘Thorns’ it won’t be for you, rest assured that’s the album’s weak link…and with regarrd to the rest, if at first you’re unsure of what you hear, stick with it. Much like well nurtured flowers, this could be a grower.