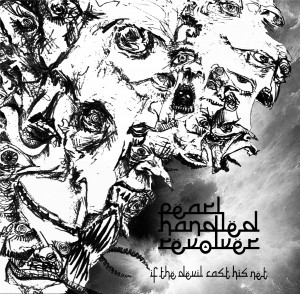 Chances are, you’ve previously read something about Pearl Handled Revolver that likens them to Tom Waits. If you have, just forget it. Their frontman Lee Vernon posses the vocal stylings of a few old souls, but comparisons to Waits are pretty much right out. There’s very little heroin and drink addled shouting in his delivery, nor is the music his voice fronts in any way obtuse enough to be derived from absolutely anything in the Tom Waits catalogue, especially post 1983. There are swathes of music on this – Pearl Handled Revolver’s third album – that culls huge influence from The Doors, explores the darkest corners of Love and even shows allegiance to the more contemporary sounds of Mark Lanegan, but those coming looking for a direct influence from Waits will be disappointed. Waits, too, being ever the contrarian, might even be put out that his name is being banded about in places, simply because an album includes work by a vocalist who has probably had a snifter of whiskey. In short, it’s typical lazy journalism to wheel out the Waits comparisons just because a vocalist has a darker sound in his delivery – and it’s usally almost exclusively the practice by hacks who’ve seemingly never heard a Tom Waits LP.

With that out of the way, their third album ‘If The Devil Cast His Net’ is absolutely cracking. It’s eight songs are moody, positively dark and wanton throwbacks, in the main, to the late 60s. With sterling musicianship and a fixation with bass and organ workouts, they’re very much the UK’s closest equivalent to the much missed Skeletons In The Piano. In a surprising choice of sequencing, the album opens with one of it’s weakest cuts. ‘Help Me Down From The Trees’ is a busy retro rocker that works around a fuzzy guitar riff and organ stabs. In the musical department, it’s Simon Rinaldo’s bass work that really stands out. During most of this six minute jam, the bass is punchy and busy, and surprisingly – though, perhaps never intentionally – manages to recycle a disco riff somewhere along the way. Vocally, Vernon attacks the retro bluesy rock sounds with a little grit, like a hard rock Chris Rea, before unashamedly using a vocal meter that strongly recalls Jim Morrison. The gentle nods to The Doors’ ‘When The Music’s Over’ are likely to be very much intentional, but they really help to get a stronger sense of where the band are coming from. With a very Steppenwolf-esque sense of drive, ‘Don’t Throw It Away’ breaks the band’s sounds down to their very essence, as a simple and repetitive (but classy) guitar riff invites the listener to crank the volume, while a blanket of keys pump out sounds straight from the backwoods of a druggy 1969 and the vocal amplifies the retro rock. It’s not as appealing as some of the album’s other tracks, but it ticks so many boxes and it’s brevity makes its sharpness all the more hard hitting and it’s about as close to something from Screaming Trees’ ‘Invisible Lantern’ LP as possible.

In the first of the album’s double whammy of essential listens, ‘Someone Like You’ opts for the quiet and hazy approach and, man, do these guys like The Doors… Focusing in on the bass, there’s a warm groove pulsing through the veins, to which, the guitar is more than happy to adapt. Trading his slightly distorted sounds in for something jazzy, Andy Paris plays in a really understated way throughout the track, rarely deviating from his opening riff, but there’s no denying that his playing is very smart. Vernon wheels out his best Morrison croon and it’s an approximation of a legend that’s so good that should he start to balloon in weight and grow a massive hobo beard, his bandmates should probably worry he’s taking his job too seriously. This sounds like a leftover from the more tuneful aspects of the ‘LA Woman’ sessions in the way it ambles along, oozing cool at every step. Another number veering towards the epic, the title cut sprawls across almost eight minutes in a moody blues fashion (that’s a style, as opposed to a reference or influence from the seminal late 60s band). The loud lead guitar breaks have a pleasingly dirty tone; the organ rises from quiet hum to angry swirls and there are more jazzy leanings, this time courtesy of drummer Chris Thatcher who shows that she can shift between aggressive playing and a thoughtful swing in a heartbeat. Holding everything together, Vernon cries and wails like a musical ringmaster baying to an unsuspecting crowd, but most of the time sticks with a bluesy slant as opposed to anything particularly angry. …And he’s still nothing like Tom Waits. Moving into the expected instrumental break, the organ takes on a circular motif, pumping out the same notes over again, while a vibrato fuelled guitar cranks out distorted notes, making everything appear not to far removed from an early 70s Deep Purple workout. Again, this is absolutely amazing stuff.

With a lighter vocal and more spacious arrangement, ‘Walk These Streets’ pitches a crooned vocal against repetitive by sparse guitar. Filling all remaining space with strings and a bass drum heartbeat, the mood is dour but accessible, like a cousin to one of the saddest parts of Queens of The Stone Age‘s ‘Lullabies To Paralize’. Gaining pace midway, the strings swirl and swell, the percussion crashes and the ache in the voice gets ever bigger, allowing for the sense of hurt to take centre stage. With emotions peaked, the slow beat comes back in and the dark soundscapes play out, blissfully unaware of whether this is taking place in 2016 or 1972. It’s never the most joyous of musical journeys, but it was never likely to be; it certainly provides the album with an essential change of pace after the intense title track. ‘Absinthe In Adelaide’, at first, doesn’t sound quite as sharp, since it really taps in to the album’s slightly muddy sound, but once your ears adjust, it’s walking pace beat, combination of organ sounds and general fugginess start to make sense. Presenting PHR ever more as men out of time, the sounds of sixties counter culture loom large with a partly spoken word performance and the eventual blossoming of a vocal stance that makes Vernon sound like the lovechild of Jim Morrison and Mark Lanegan. While this seems as if it’s leading somewhere, it ambles along in an entertaining fashion for a few minutes and then fades…almost as if this journey is never-ending.

A funky bassline and fuzzed out guitars drive ‘Loverman’ in a less interesting way than some tracks, but in lots of ways, represents the very heart of the band, with organ solos and grubby guitars at the centre of everything. Something akin to a more sedate St. James and The Apostles, the preferred Doors fixations give way to something that could evolve into a Santana jam, with the vocal whipping up a mini storm to finish. Having covered a lot of blues rock ground already, ‘Into The Blue’ finishes everything off with a punchy blues workout, almost an approximation of ‘Back Door Man’, with choppy guitar parts punctuated by keyboard noodles and occasional angry breakdowns. Closer to a straight blues than the rest of the album ever ventured, this gives Vernon one last chance to prove his mettle and he sounds at ease with the material, almost as if he escaped from the womb as a thirty year old blues growler – and he’s great – but the music, the music, is stellar. The distorted organ parts provide a particular highlight during the first half of the number, before an extended instrumental veers rather close to being an amplified version of ‘Riders On The Storm’, y’know, just in case those Doors influences were perhaps too subtle before.

It’s definite you’ve heard lots of music like Pearl Handled Revolver before, and most of it recorded several decades earlier. In terms of reviving a very specific retro sound, though, you’re unlikely to find it done with any more style or much more enthusiasm than this. Drenched in the acid paranoia of 1967 and coloured farther by the blues based hard rock of the early 70s, this is an essential listen. To borrow a lyric from the band, it’s possibly even “soup for the soul”.