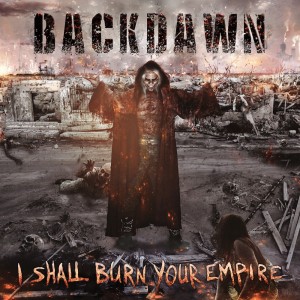 From the battle march of the drums that opens ‘You Raised Me To Fall’ there’s an inkling that this will be one hell of a metallic ride and as the band explodes into a pneumatic riff and frontman Chris Snaeder lets out his first huge roar, those suspicions are confirmed. The excitement in their dramatic entrance, in terms of feel, almost recalls that first time you heard Machine Head’s ‘Davidian’. As the main riff slowly takes over, the heavy mix of pneumatic and hugely downtuned chug creates a classic sound, with some grinding elements combined with a throaty vocal style showing a huge influence from Lamb of God. That’s enough to sustain some of the best metal-based entertainment…and so, similar moods provide the bulk of the rest of the disc, but always with more than enough variety en route to ensure things never become too samey. Although retaining a heavy bass, the intro to ‘Fallen Brother’ showcases some smart fretboard manipulation, something that returns throughout the track, while the pounding rhythms and dirty guitars provide more heaviness. Throughout this track – and indeed, the album as a whole – the huge slab of sound is made all the stronger by a faultless mix. The gruff vocal style is very assured, particularly so on an easy-to-grasp shout along chorus, but by the time the instrumental break rolls around, things get even better. Some Trivium-esque twin lead work makes a stand and following an increase in rhythm, really grabs the ear. While it sounds as if this is an elaborate lead into an old-school solo, it doesn’t actually go there, preferring instead to introduce a circular riff which would be rather at home on a middle period Opeth release.

‘Kill Yourself’ takes a sidestep from the extremes at first and its intro drops a slightly old-style, very melodic riff that sounds like a Megadeth leftover reworked by the ghost of Dimebag. This is on hand to underpin a chorus that, while not all that memorable, is markedly different from the preceding verse. That verse – subject to a huge approach that’s downtuned and forceful – could nestle alongside anything from Lamb of God’s ‘Resolution’ album of 2012, while the track’s second half does an about turn into something slower; a tune where a different, less growly vocal takes over and approximates the post-hardcore shouting of most Mastodon material. The work of three ideas coming together, it’s testament to Backdawn’s musical prowess that it all flows surprisingly naturally. ‘I Saw Him Drowning’ leads with a suitably spooky intro, it’s clean guitars reminiscent of a Metallica ballad – a touch of ‘One’ creeping in here in there – before everything shifts into Backdawn’s preferred Lamb of God-inspired hardcore chuggery. …And when the playing is this good, that’s no bad thing: the dual sound of Snaeder and Tisa Helvegr has a genuinely classic sound. The repeated refrain of the song’s title works well enough as a hook with little else to sustain it – such is the greatness of the arrangement – and the featured solo is a killer. Bringing more of an old-school squealing guitar sound than on some of the other material, Snaeder sets about signing off the number with the kind of string bending that would make Testament, Annihilator and Overkill very proud. The marriage of the more hardcore sounds and the traditional within this particular track covers so much essential metal ground.

‘This Is My Will’ is, at least in places, one of the album’s most intense efforts, with riffs leaning towards a melodic death style, punctuated with a juddering rhythm, courtesy of drummer Anthony Stone. Stopping short of going too far into the realms of ultimate heaviness, thus potentially alienating a few listeners, the band introduces clean vocals on the chorus with slight filtering suggesting that someone within the ranks loves Fear Factory. Those contrasting styles work well, and as expected, Backdawn deliver both with utmost professionalism. With a slow, atmospheric intro where clean guitars suggest impending doom (or at least something mournful), ‘Of Sand and Blood’ soon becomes another highlight, combining a Soilwork inspired groove metal riff with a slower interjection, before going all out with pneumatic drums on the chorus. It’s an example of a track where the riffs are far more interesting than any vocals or lyrics but, man, what a riff…and then, just when you’ve heard it all, there’s a brief foray into a cleaner style, where alternative metal vocals jostle against a busy lead guitar. Factor in a couple of classic sounding solos over a timeless thrash riff and this becomes a track that gets better with each play.

The title track kicks off with a great riff before descending into a muddy but satisfyingly heavy sound, it’s chorus again adding a slightly more melodic flair, all held together with a dark, neo-apocalyptic lyric; ‘Call For War’ shows off some great guitar tapping and a riff that strongly resembles Fear Factory’s classic ‘Replica’ in a couple of places and ‘Revelations’ closes everything with an equal mix of heavy, driving riffs, melodic lead guitars and a real sense of power. Each of these adds more weight to the argument that in terms of heaviness and playing abilities, Backdawn hit things square on pretty much every time, while the songs – all lyrically rather dark and obsessed with the ravages and horrors of war – really helps the album to feel like a complete work as opposed to just a collection of songs.

While ‘I Shall Burn Your Empire’ doesn’t do anything particularly new – certainly nothing you won’t have heard if you love Lamb of God or Gojira – it does what it does exceptionally well. These twelve tracks are pretty much flawless. With this disc, Backdawn deliver what is potentially the finest metal disc of 2016.