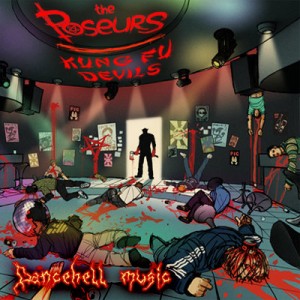 This 2009 split release from Riotska Records brings together otherwise unavailable recordings from two Russian bands – The Poseurs and Kung Fu Devils.  Five songs from each is enough to give more than a taste, and more than enough to demonstrate that both acts have their strengths while tackling punk-rooted music from different angles.

The Poseurs kick things off with a sample from old TV (sounding as if it dates from the days of the USSR), before ‘Sekta’ breaks into a full throttle piece of skacore in their native tongue. The muted guitars providing intermittent ska chops are fine, but they’re far outweighed by the band’s taste for hardcore punk, as near metallic riffing takes precedence almost throughout. The relatively low budget recording fuzzes up the guitar sounds and very much adds to the DIY charm. The gears are cranked for ‘Idiokratiya’, eschewing all ska elements for a hardcore approach, bringing slight influences from early Slayer via the guitar riff before assaulting the listener with approximately a minute’s worth of crusty near-grindcore with vocals to match. Both tunes are fairly representative of each end of The Poseurs’ musical scale. Mixing hard ska chops with some intense near death metal growling, ‘Blood, Cum or Bubble Gum’ seems to set out for shock value on a small scale with its intensity, but beyond the enjoyable ska rhythms which occasionally appear, has very little to recommend it. The vocal stylings are so extreme on the choruses the words are inaudible, while the verses (pulling influence from Falling Sickness, Leftover Crack and a little Against All Authority) appear to be sung in English, but it’s so heavily accented, it may have worked better all round in a Russian dialect.

Perhaps their best number – certainly among their most well-rounded – ‘Subculture Is Li(f)e’ moves things into a slightly more melodic territory, with its ska parts and unrestrained vocal recalling Operation Ivy. The ska elements are given an extra sense of urgency via a really harsh sounding snare drum, while on the chorus the band opt for more of a mix of crack rock/street punk topped by more grindcore voices. Balancing out the ugly parts of this tune, a few of the lead guitars are more intricate than anything heard previously. Nearly as enjoyable due to levels of sheer abandon, ‘Stado Devak’ is a thrashy assault where the previous barking vocals get replaced by full on throaty screaming as if Falling Sickness man Gabe Gill had bought black metal influences into his already intense delivery. Backing these yelping assaults, this is a number with a particularly tight drum part, while a few of the lead guitar flourishes make a more than welcome return. Given the demo quality of the recording, it’s a shame more of the bass work cannot be heard, since there’s clearly a great deal going on… Never missing the opportunity for a sample, the band also get brownie points for their usage of the Monty Python sketch ‘Face The Press’ during the number’s brief instrumental break.

Although less fun on the surface, Kung Fu Devils take a more direct approach, mixing punk with hardcore influences resulting in a handful of tunes which hint at influences from older bands such as Adrenalin OD and classic acts like Heckle. However, it’s an influence from Agnostic Front which acts as the strongest – and this is due in no small part to one of the band’s vocalists adopting a guttural delivery which carries more than a hint of the great Roger Miret himself.

Across their five numbers, the band appears constantly tight, with their heavy guitar sound taking most of the weight of the arrangements. In terms of musical ability, they are potentially the stronger of the two bands here, constantly flaunting relentless drum parts and surprisingly busy bass riffs (as present in both ‘Town of the Neutron Bomb Explosion’ and ‘Boiling Point’), but it’s their use of unsubtle gang vocals in the 80s hardcore punk tradition which pulls everything together most effectively. Elsewhere, the uber-short ‘Auld Lang Syne’ is a classic shouter in the Sick of It All tradition, while the potentially silly ‘Straight Out Of Dildocore’ comes across like something from the rough and ready Screeching Weasel debut, albeit played by a metal band. Their closing number, ‘Better Than A Thousand’ (likely named after the straight-edge band featuring Ray Cappo) pulls all of their influences together, finding time to allow the guitarist to stretch out and play something resembling a lead break. Overall, it’s very enjoyable material all round. [There is also a hidden track featuring a short, lo-fi hardcore punk tune; this could be a rough demo by KFD…but it may even be someone else entirely.]

‘Dancehell Music’ may be a bit inconsistent, but there’s material certainly worth investigating. If nothing else, it’s a fantastic celebration of the directness of punk music: a movement that it isn’t hampered by language barriers and ultimately knows no cultural boundaries.