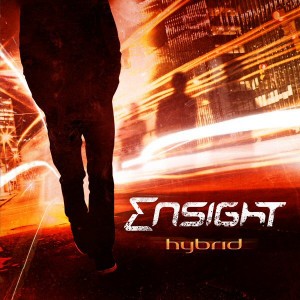 As with so many releases of this nature, ‘Hybrid’ (the album) begins with an intro to set the mood. That intro, ‘Downfall’, comprises of whispered voices and droning sounds suggesting a setting of a futuristic world. The guitar riff and keyboard work that follows is firmly in the melodic metal bracket, but a couple of smart chord changes and a retro keyboard make it sound like a vastly heavied up version of an action TV series from the 1980s. Moving seamlessly into ‘Godfreak’, the band thunder with a huge power metal riff, the guitar strings so muted they resemble little more than a pneumatic chug. With a shameless noodling keyboard adding a counter melody, there’s plenty of scope for Cannolletta in the vocal department…and he’s more than up to the job. His voice has overhangs of eighties metal in the way it holds a crying edge, but there’s also a sense that he won’t shy away from a few more aggressive styles. For now though, the track straddles a perfect fusion of classic eighties metal and nineties progressions and joined by some smart harmonies and he sounds great. Lending a touch of melody to smooth over the previous bombastic onslaught, the instrumental interlude provides an early highlight with the guitars slowing down to a heavy groove, over which a reasonably tuneful keyboard solo takes pride of place. Moving into the guitar solo, Dimitri Meloni’s sweeping notes are fast but never lose sight of a tune, before Casale comes back in for a second feature. Making use of a strong hook one last time, the harmony vocals win out before a very heavy drum part signifies the inevitable fade. This is good…but the majority of what follows is amazing.

By track three, everything settles down, and ‘The Pain Society’ moves slightly farther away from power metal and further into prog. With an enormous bottom end, the main riff is a killer, hammering home a superbly downtuned chug. The heaviness is impressive, sounding at times like an offshoot of an ‘Awake’ era Dream Theater number [but without the contributions of a vocalist who sounds like he’s being prodded with a sharp stick]. It’s the chorus where everything works better, though, dropping into a few older styled metal motifs and Cannolletta’s voice really coming into its own. Harmony vocals are important here, lending a hint of Fates Warning as well as past work by the overlooked Silent Call. The contrast between these two styles already ensures this is one of the album’s finest efforts, but the instrumental breaks are equally powerful with squonky keyboard sound that sounds like an old Jordan Rudess favourite. With a bigger quota of keyboards all around, the title track presents a couple of circular riffs, a superb drum sound with plenty of bass pedals and a bombastic chorus where the whole band explodes with life. Here, it’s more obvious that the marriage of Cannolletta’s vocal style and Casale’s surprisingly melodious keyboard swirls are the heart of Ensight, despite Meloni’s heavy guitar style so often being the dominant force. An extended instrumental showcases some harmonious multi-tracked guitar riffing – very much of the old-school – alongside a superb solo or two, which combined with the theatrical chorus adds up to a full and rewarding listen. While a couple of the vocal notes stretch a touch too far, a few listens suggests this could eventually become one of the album’s jewels.

As with so many prog metal releases, the heavy stuff is enjoyable, but the magic really happens once the band start to dial things back just a little. The more emotive ‘Words and Dust’ trades in the hugely metallic force for softer sounds, often pushing the keys to the fore. A perfect mix of off-kilter drums and very eighties keyboards – with a more AOR bent – occasionally hint at influences from ‘Fugazi’ era Marillion (albeit very fleetingly), while Meloni’s guitar work – cleaner tones abound and almost bluesy in its nature – is mindful of the softer approach. Drawing everything together, Allesio Consani’s warm bass – for once, not beavering at lightning speed – is particularly pleasing with it’s understated style and genuine presence. In an alternate universe, this could sit alongside the quieter moments of DT’s ‘Images & Words’, but in truth, it’s about a hundred times better than anything those guys have peddled out in the name of music since 1995. While well played, ‘Bloodstained’ doesn’t match up to the previous couple of tracks. At this point, there’s a sense of having heard all of Ensight’s favoured musical styles and tricks, but that’s not to say it’s without merit. Of particular note during this track is the instrumental part where Meloni and Casale trade solos off each other, a couple of bars at a time. Meloni shows, once more, that when it comes to solos, he’s a man who likes to keep a touch of the melodic while remaining frighteningly nimble on the frets, while Casale shows he is utterly unafraid of unfashionable keyboard noises. In prog metal terms, of course, it’s terrific stuff, almost guaranteed to satisfy genre fans. The double whammy of ‘Falling From Above’ and ‘Until The End’ essentially offers much more of the same, but in the case of the latter, the techy keyboards are stoked up in a way that revisits the mechanised and futurist feel of the intro, before swirling late 80s keyboard abandon, where melodies weave a circular riff over one of the album’s heaviest guitar parts. As the song progresses, it’s more than possible to hear sledgehammer influences from prog metal bands of the past, but it’s no less enjoyable for it’s tried and tested nature. It’s more than fair to suggest that listeners who’ve heard any merit within Ensight’s work thus far will thoroughly enjoy these numbers, while the band aren’t about to rest on their laurels…

Pulling out the big guns to finish, ‘As The World Falls Down’ is a sprawling epic, just shy of thirteen minutes; a track where each member of the band really gets to shine. An acoustic intro owes more to late 70s Rush than Dream Theater and the arrival of an enormous slab of keyboards – going for weight over complexity – reinforces a feeling that the ensuing number will be huge. Upon finding its feet, Meloni drives everything forward with a tough riff, under which the blanket keys make sporadic appearances. Dropping in and out of quirky and pneumatic rhythms, Dridge steers the tune seemingly at his will, but the rest of the band are firmly up to speed. The instrumental showcases that follow are perhaps some of the best on the record, with occasional eastern flourishes colouring the lead guitar, but upon reaching a quieter, almost haunting passage, the band move things into a whole new league. Here, the melodies almost seem to recall nursery rhymes and some huge soaring lead guitar work is absolutely thrilling – easily a match for Adrian Smith and Dave Murray on form. Crashing back into heaviness, Cannolletta appears in fine voice ready to lead the band to glory, already having made his presence felt…and then, just as you think they’re done, Ensight wheel out one last new riff: in this instance, a driving, solid affair that is very welcome but all too brief…and ith a combination of pompy keys and fist-clenched anger, the band approach the fade in a position of real strength. The fade? That can’t be right…not after such hugeness. There’s a little more; to calm the listener and bring things full circle, the acoustic intro reappears somewhat unexpectedly, thus closing a superb number – and, indeed, a great album in style. In short, ‘As The World Falls Down’ might just be one of the best things Symphony X never wrote.

While hugely overblown, this is thoroughly enjoyable album. The players use their years of experience wisely, making sure that their muso tendencies – while very much in evidence – do not always cloud the songs unnecessarily, while a few choruses with occasional traditional 80s metal leanings certainly help to make this a bit more accessible than most other albums in a similar style. The fact Ensight a decent singer helps a lot too, of course, as does the fact this is a reasonably easily digested single disc affair, clocking in at just over fifty minutes. Dream Theater, take some notes…please.