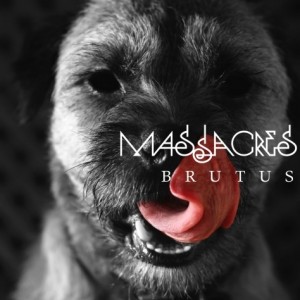 Formed at the beginning of 2015, London alt-metal band Massacres came a long way in a very short time. Their sound, an uncompromising blend of metalcore and hardcore punk intensities, quickly found an awaiting audience. For work on their debut EP, they also secured the talents of Jason Wilson, a producer of some renown whose studios had seen the likes of Cities, You Me At Six, Don Broco and Bellowhead working within. With a killer approach to making fairly uncompromising noise and a decent producer to help give things the ultimate send off, there was every chance that debut release could be a monster.

…And it is. ‘Brutus’, as sure as its tough moniker, is a real bastard of an EP, a riff-heavy, screamo world of jarring rhythms and outright aggression. With a sledgehammer crunch, singular chord and simultaneous shout of “Fuck!”, Massacres’ entrance is anything but subtle, but that’s exactly the first impression they leave as opening track ‘One of the Boys’ begins a major musical assault Repeating the trick with different shouts and a sharp muted riff increases the tension about tenfold, before the whole band explodes into a metallic frenzy, the guitars bringing a huge amount of metalcore anger while frontman Dave Rogers (rather fittingly credited as handling “vokills”) screams with a genuine force. Eventually settling upon a hefty groove, the band continue to engage the ears farther with a great slab of a tune. The downtuned riffs are larger than life – incredibly weighty, while a huge stereo split widens the sound even more, while drummer Andy Sartori smashes his kit, often dictating the complexity of the piece. Shifting between the sharp riff and really heavy crunch, Massacres don’t leave much room for the listener to catch breath, but the energy is immense. It’s not the most straight ahead piece on the EP, sure, but ‘One of The Boys’ doesn’t mess around when it comes to grabbing the attention. Scaling back a little, ‘Death Knell’ recycles a hard riff that’s more than reminiscent of Nirvana’s ‘School’ – albeit played much heavier – reinforcing a tight musical bond between the guitarists and Martin Walker on the bass, bringing a huge bottom end. As the verse passes, the riff holds up excellently, as Rogers powers through each line with the necessary lack of restraint; added together, these powerful elements result in great metalcore sounds, like experiencing Every Time I Die immersed in something slower and meatier, or a more interesting Cancer Bats.

A standout, ‘Everything I Want To Do Is Illegal’ combines discordant, almost hardcore punk verses with a slow and grinding midsection – all of which pushes drummer Andy into the spotlight. The faster elements are great enough, particularly if you love Gallows et al, but it’s the slower and angrier riffs that leave the biggest impression. Kris Mayzee’s tone is dense, yet thanks to a great production job, never muddy, his downtuned grinding brings with it a huge appeal. ‘To The Victor, The Spoils’ is potentially more interesting: from the outset, more fine riffery is on hand for speaker-testing grind and crunch, but the constantly shifting time signatures appear to allow for all of the band’s signature sounds in what can only be described as a powerhouse performance. In three minutes, Kris brings riffs that owe as much to Chiodos as Within The Ruins, complex fills and intense downtuned slabs of noise jostling with each other while the drums, yet again, embark on a spasmodic journey and the vocals blast with a real intent. There’s also a surprising nod to the old school, as one of the riffs hints at a more melodic twin lead sound, but it’s hardly a concession to those who’ve thus far not been won over by the metalcore/alt-metal sounds. …And as the band pull things to a close with Dave screaming “Left…left…left right left!” and the final notes dissipate, the silence confirms something that’s long since been clear; there’s no question about it: ‘Brutus’ is the musical equivalent of a smack in the jaw.

Aggressive, riff hungry and fond of an off-kilter rhythm, Massacres really go for the jugular on this EP. If the combination of a band who sound fit to burst and some absolutely astounding riffs sounds like it might just appeal, there’s a good chance you’ll find this absolutely invigorating. A great debut.