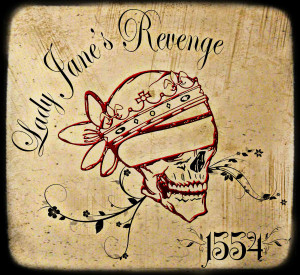 It’s hard to believe that by the time of this release that there are people out there who still think pirates are cool. By the turn of 2016, The Pirates of the Caribbean franchise is still coughing up dregs of adventure even though the pirate thing is, by this point, older and more tired than Keef Richards’s addled skeleton. Still, here we are, and Lady Jane’s Revenge make their entrance into the alternative rock sphere with a barrage of riffs and a somewhat pirate-y undertone (obviously, by that, it doesn’t insinuate any involvement from Fergal Sharkey with an eye patch, peg leg and parrot combo, though this EP would perhaps be more interesting if it did).

As hinted at by the artwork, this musical journey begins with the sounds of a storm, a tolling bell and the mood of the open sea. The guitar appears, churning a riff that at first sounds as if it’ll be the backbone to a shouty shanty and then Lady Jane’s Revenge throw themselves head first into a funk metal workout. It’s quickly clear that James Coffey’s slap bass comes with a reasonable amount of attitude and – taking the small recording budget into account – the guitar riffs have a solid crunch. Frontman Billy Crook’s vocals switch between ‘Uplift Mofo’ era Red Hot Chili Peppers quasi-rap and Brandon Boyd style crooning, both of which he does admirably (no seafaring pun intended). On this opener, LJR show a reasonable amount of promise; while their influences are worn on their sleeves, the combination of funk and rock provides an enjoyably retro listen. ‘The Kid Within’ takes a sidestep into more upbeat alternative rock territory where the guys show everyone they love Alkaline Trio and slightly punkier fare as much as funk metal. Here, the guitars have a sharp tone, the use of gang vocals brings a reasonable hook, and Crook’s voice – although a little lost in the mix – delivers each line with gusto. The track’s high point comes courtesy of a rollocking solo, full of old-school attitude and plenty of wah-wah, although this seems like an afterthought since it’s used to close the track. This number also suggests there’s a reasonable amount of talent in this band, though from here on in, things aren’t quite as sharp…

The remainder of the tracks languish in the safety of the band’s more than obvious influences. This is a shame since, rather than sparkle, it makes the remaining four songs rarely sound more than merely ordinary, often like hearing an experienced Incubus covers band playing in a pub (so much so, it would hardly be surprising if it ever came to light that’s how and where LJR crafted their talents). Arguably the weakest link, ‘Next Tuesday’ appears with a chugging rhythm provided by a rather thin drum sound, over which Crook appears to do little more than repeat the same line over and over. He changes key occasionally, as befitting the backdrop, but sadly, his voice wanders off-key, too, making a particularly unmemorable tune sound rather unprofessional in its send off. ‘Carbon’, meanwhile, is a slow plod that shamelessly borrows from any one of the least interesting numbers from RHCP’s ‘Stadium Arcadium’ double album bloater, while Crook channels his inner Brandon Boyd as best as he can manage. A thick guitar tone promises much but delivers little, a chorus comes and goes and sounds more like vocal noise than anything truly memorable…it’s only Coffey that saves the day; once again, his bass tone is meaty and his playing incredibly solid throughout.

At the tail end of the EP, the hard rock sounds make way for semi-acoustic workouts and as you might expect, there’s more there’s more than a hint of Incubus’ hit ‘Drive’ influencing the outcome. ‘PMA’ comes with a really nice electric guitar sound, tapping into soft and thoughtful tones while acoustic twiddles add the necessary flourish. The rhythm section are sidelined to another slow plod, since this number is chiefly about vocal melodies. Crook proves more than up to the job in hand as he works through each line, flowing from the wordy to the more heartfelt cry, eventually imploring us to “chase your dreams, be the best you can be”. Well meaning, well structured, well played: it’s one of those songs that perhaps should have been a little better than it is. ‘Sunny Side Up’ has the benefit of a crisp guitar sound, Sam Kent’s acoustic having a lovely live in the studio tone. Accompanied by a strong vocal, Crook sounds more like Boyd than ever…in fact, for those who didn’t know better, this could be an Incubus b-side. That’s not necessarily a criticism, as it’s something LJR do rather well, and this technically comes with more heart than anything on Incubus’ own ‘If Not Now, When?‘ from 2011. At the same time, though, it leaves a feeling of being rather workmanlike with no real originality…and as the sounds of the sea fade back in, we are left where we boarded ship not so long before.

There’s nothing intrinsically wrong with this EP, or indeed, Lady Jane’s Revenge; the riffs are often well played, the songs come with a sense of focus and Billy Crook has a reasonable voice too (when it’s in tune). The main drawback is that all just too predictable, relatively safe and little more than the sum of its influences – namely Incubus, later period Alkaline Trio, early Red Hot Chili Peppers, Incubus, Incubus and Incubus. It’s one of those releases that’s okay for a few listens, but those looking for any originality will almost certainly lose interest after two or three cursory spins.