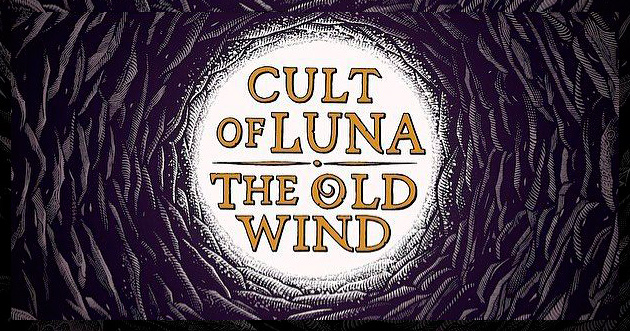 With both purveyors of a strong post-rock and doom sensibility, the pairing is inspired and while only three tracks, the EP is a thoroughly enjoyable affair. The track offered by Cult of Luna is, in fact, a cover. Not of anything your average person in the street would recognise, of course, but a cover nonetheless. Tackling Amebix’s 1987 tune ‘Last Will & Testament’, Cult of Luna take it from being a cross between crust punk and Celtic Frost and heavy it up considerably. The Amebix original comes with some great riffs, but a thin drum sound; naturally COL set about fixing that instantly. And they also take the riff and increase the intensity, fatness and volume about fifty fold. A few bars in and the weight of that riff is so immense, it’s impossible not to love it in an instant. Frontman Johannes Persson vents accordingly, with a performance that makes the most of his guttural post-metal shout. From that point, things have no hope of ever lightening up; the riff never quickens pace; the only time things subside is for a dark instrumental break – bringing more focus to the bass – but even then, it’s still the musical equivalent of a truck. Moving towards the climax – the heaviness of the number making it feel like more than just shy of six minutes – the drum sound also continues to impress. In short, fans of COL will surely enjoy their take on this cult number.

After COL get things off to an amazing start, it’s time to hand the musical baton over to fellow Swedes The Old Wind. It may be sacrilege to suggest such things, but the pair of tunes delivered by the Wind are the tracks that really stand out. Their first, in particular – the brilliantly named ‘Wooden Scythe’ – really shows where they’re at. The main riff is almost as heavy as the previous from COL and typifies some great doom in the process, but the arrangement also shows a band that appreciate some melody with their crushing riffs. The track opens with a blanket of synths, resting somewhere between dark symphonic metal and goth; a fantastic lead bass sound adds a stronger melody while a hushed, growling voice recites a prayer. Setting the scene, there’s a feeling this is going to be epic before the heavy riff crashes in…and once it does, The Old Wind have got you. Throughout the verses, the rhythm guitar has a preference for shorter chords (although still with mucho heaviness), while frontman Tomas Liljedahl growls in a manner that’s sometimes closer to post-hardcore than traditional doom metal. This is good…but it’s approaching the section where the chorus should be when you’ll potentially realise that this number is a classic. The heavy guitars underpin a melodic, almost gothy soaring riff that, despite being incredibly dark and intense, also happens to be surprisingly catchy. ‘Daughters of Cleanse’, meanwhile, owes more to a traditional doom with its collection of enormous lurching riffs, but again, the chorus sections show The Old Wind to be a band who are more than happy to bring in other influences; the grinding intents (and intensities) here borrow heavily from post-rock with the increased use of discord and shredding guitar sounds, while Tomas’s scratchy vocal is hardcore – and then some. This is a great primer for The Old Wind: these tracks will make many listeners want to hear more…possibly much more.

‘Råångest’ does exactly what a great split should. Firstly, and most importantly, it offers some great music that – although of huge interest to a fan – mightn’t necessarily sound completely at home on a fully realised release; secondly, it has the potential to open many new ears to a lesser-known band. …And the fact that at the time of release, the lesser known Old Wind potentially trump their hosts and turn in better tracks at both turns is surprising…and amazing. For doom fans, this EP (alongside the release from Black Bow signings 1968) kicks off 2016 with a real intent. Recommended.