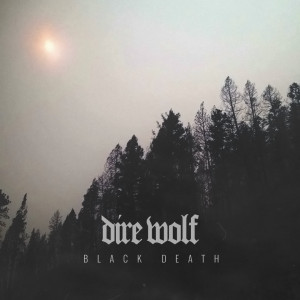 As much as their choice of band name might suggest, Brisbane’s Dire Wolf probably don’t have much time for the Grateful Dead’s brand of Americana. Formed in 2011, the band’s chief goal was to become one of the city’s heaviest bands – and if they couldn’t claim such a feat previously, their 2015 EP release ‘Black Death’ must set them pretty close. In just under twelve minutes, the band lay down a brutal hardcore sound, uncompromising yet thrilling, in a manner that fuses influences from Dillinger Escape Plan with a whole lot more besides.

Kicking off with ‘Black Death Plague’, a few shredding guitars set the pace before the band steps in for a real assault on the senses. During less than minutes, those guitars never subside, Max Dillon has absolutely vented his spleen and the drums thunder. In short, in a sound that sounds like a fight in a car park between Dillinger’s frontman and various members of Gallows, Dire Wolf announce their arrival in an unshakable way. …And it doesn’t stop there: at the mid-point, drummer Mitch Louttit wheels out some furious double bass work, smashes the snare with an 80s grindcore madness and Dire Wolf launch headfirst into full-on pneumatic ugliness. For those still who haven’t been traumatised by this particularly ballsy offering – packing a frightning amount into just 1:44, the band up the musical stakes from here on in…

Their crossover sounds really hits home during ‘Dead In The Dark’, a more complex offering that adds a couple more discernible shifting time signatures to the barrage of forthright anger. The speed and buzzsaw guitars are of the straight up hardcore punk variety for the most part, and indeed, things start with purest grindcore intents giving Louttit a full fitness workout, but the bang up production values afforded to the release show Dire Wolf’s mashing of genres to run far deeper than just thrashing. The furious collision of the rhythm section soon dissipates and a slow groove allows a bass sound to cut through without losing any of the overall fierceness, and shows off superb playing from those concerned. The percussive cymbal work, grumbling bass and atonal guitar line shift farther towards metal and in doing so proves these guys are fluid musicians as they effortlessly fuse a huge slab of punk, a slice of angry metal and an almost grindcore intensity seamlessly. The result makes early Bring Me The Horizon and Gallows sound weak. The bass sound during the second half of this track is so dark and aggressive, it sounds absolutely unshakable, while the vocals – never stretching beyond a guttural shouting – are suitably confrontational throughout. Fantastic stuff, indeed.

The extended playing time of ‘No More’ allows even more opportunities to stretch out. Tackling a monster of a riff, the hardcore metal sound really kills with the melding of another terrific bass sound and slow grinding intensity. The influences from nineties bands like Strife are pretty much unavoidable and while there’s an instant familiarity, it doesn’t make it any less impressive. Increased distortion, obviously, makes everything twice as intense and by the time the band wind down – slowing gradually as if running out of batteries, eventually taking a doom metal riff and hammering it for all it’s worth – there’s no question: Dire Wolf are a genuine force. In short, if you want something subtle as bricks, slow, grinding and sweaty, this number will not disappoint. Taking a wall of feedback and sliding straight into ‘Holy Men’, a discordant guitar line is all that stands between Max’s screams and silence, an unsettling beginning eventually giving way to a grindcore assault that mixes the best elements of Nails, Dillinger and middle period Napalm Death for maximum groove. While ‘No More’ is arguably far superior, these three minutes give a last opportunity to marvel at the general power and marvel at Louttit’s drumming skills once more.

Showcasing some frighteningly good musicianship topped with superb production values, in terms of blending extreme metal sounds while retaining a sense of focus, groove and eventual accessibility, few DIY bands capture such a spirit as brilliantly as Dire Wolf. This EP is superbly put together, a release not to be missed.