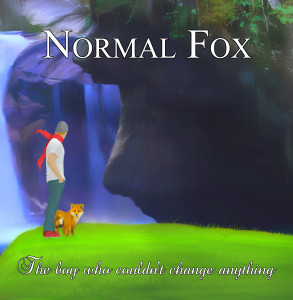 Wisconsin’s Normal Fox bill themselves as sounding like “the best summer you ever had”. The music doesn’t always instantly have a summery feel, but there are times throughout their 2013 EP release ‘The Boy Who Couldn’t Change Anything’ where the four musicians sound like they’re having a fantastic time playing music – and that in itself is probably enough to justify such claims, no matter how you’d personally choose to soundtrack your own (hopefully) sun-filled vacation time. On the surface, they sound like just another alt-rock/emo band, but as these five songs clearly demonstrate, at least one member of the band has broader musical interests than first appears.

Lead track ‘Bright Lights’ starts with a real sense of intent, with a thick guitar sound that straddles a style that is both remeniscent of early 90s alt-rock and more than a touch of twenty first century emo. A hefty discord collides with a much bigger riff and announces the band’s arrival in style. Offbeat stops allow the drums to grab a bigger slice of the action, while a very distinctive chord change throws in a little Foo Fighters influence rather unexpectedly. The arrival of the vocal forces the more modern emo sound farther, with frontman Derek Fredrericksen’s voice pushing the slightly higher registers, with a very slight wobble recalling ‘Take This To Your Grave’ era Fall Out Boy, though – thankfully – without the shiny omnipresent filtering. The collision of a strong and melodic vocal line against an incessant riff captures the core of Normal Fox’s attitude and holds the listener spellbound for the duration, while a few flourishes suggest that guitarist Spencer Fox always has one eye on pushing the arrangements into something more complex. On this occasion, he doesn’t need to – there’s plenty going on, with a perfect mix of attitude and accessible melody, while a reasonably large chorus pulls everything together. In alt-rock terms, this track almost has it all and bodes very well indeed for the rest of the EP. With a similar level of crunch and 90s melody, ‘The Toll’ is a showcase for some tough rhythm guitar work and a hard drum line, before dropping into a melodic chorus, on occasion sounding a little like Brian Molko tackling some late 90s punk-pop. It’s not especially instant, but the appeal shines through soon enough and on this track, perhaps more than any other, Normal Fox display a natural talent for tunes that have a melodic heart that beats beneath a loud and ringing exterior.

Kicking off with some great toms, drummer Trae Titus shows himself to be a great player during parts of ‘See Clearly’, although his hard work is soon swept to the back in favour of a hard clanging and needlessly repetitive guitar chord which dominates everything with the shrill and confrontational style of Fugazi and Mission of Burma. Perhaps knowing this to be a touch hard on the ears, the band counterbalances this with a strong vocal, complete with a few harmonies. Eventually, once the whole band comes together, there’s a enjoyably full sound. Although not an especially consistent tune, it’s not without appeal, and as Fox drops in with some tapped guitar leads to finish, there’s a sense that perhaps this track is more complex than it first appears. Even with some great flourishes, though, it falls short of the standard set by ‘Bright Lights’. A complete change in style for the EP’s most accessible number ‘Look Up’ dispenses with alt-rock and delivers some classic power pop, a style in which Normal Fox seem surprisingly comfortable. A tough blend of electric and acoustic instruments lay down a rather jaunty riff at marching pace, instantly reminiscent of so many bands nodding to the 1970s for inspiration, while Fredericksen’s voice appears particularly chirpy. The chorus brings a dirtier guitar, reminding us this is the same band as before, the riff carrying itself with a pleasing ring, before dropping back to the poppy verse. Like a grubby take on Matchbox Twenty, there’s so much to like here – pop styles without the sugary sweetness; an incessant melody, a bouncy rhythm…the fun in the recording really comes across, proving that sometimes, the more simple approach is the best approach. ‘The Boy Who Couldn’t Change Anything’ is worth a listen on the basis of this tune alone.

Taking a step back for something more reflective, ‘The Apology’ introduces a few clean acoustic elements. The intro makes the shift in style plainly obvious, as guitarist Spencer Fox plays unaccompanied at first, the natural production style bringing out what sounds like a live performance. That naturalistic style carries through once the vocal appears, and Fredericksen sounds uneasy with each line – possibly on purpose – with a breathy vocal that hints at bigger things to follow. After a while, a steady drum provides a backbone and overtly loud electric guitars enter the scene to swamp everything with big chords. Although more melodic than some of Normal Fox’s usual material, the unpolished style is a little hard on the ears in places, but if you can make it past that loud guitar, ‘The Apology’ is a solid number, on which represents a more adult side to the band.

For fans of the less poppy Fall Out Boy, the crunchier elements of Deaf Havana and a passing fancy for 90s bands like Shift and Jawbox, Normal Fox could bring plenty of entertainment. They’re fine players in their chosen style, but are more than aware that a big chorus can work wonders in winning over an audience pretty quickly. Another tune like ‘Look Up’ would have improved things for sure, but in terms of alt-rock with some reasonably tough edges, there’s a lot to enjoy here.