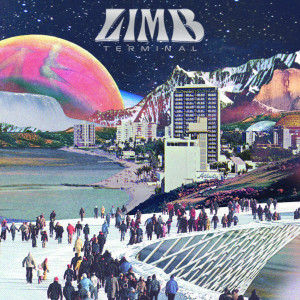 …And here it is. Eighteen months after ‘Limb’ comes ‘Terminal’, a release upon which Limb absolutely slay across nine tracks of stoner and doom-laden grooves.  As before, unlike so many of their contemporaries and peers, this band often gives themselves a real edge by never labouring their point. Whereas so many bands of this kind like to take a riff and drive it through your skull over seven and eight minute durations, Limb know that less can be more; and most of ‘Terminal’s material is done and dusted in under five…and usually even quicker than that.  Album opener ‘Three Snake Leaves’ demonstrates their passion in well under two minutes – the ultimate quick hit.  With a dropped tuning, the guitars rumble without being impenetrable, bring an almost Fu Manchu-esque groove, while new drummer Tom Mowforth (previously of Uncle Acid) rattles the snares as if to build the tension.  When that inevitable crunch comes, it does so with style – and with the addition of a throaty rattle courtesy of Rob Hoey, the ensuing sound is so unmistakable.  Having already fit two moods into barely a minute, they go brazenly for a third, slowing down for a bigger riff and repeated refrain, before feedback slips into ‘Ghost Dance’, a mid-paced stomper, complete with a mechanical and repetitive feel to the vocal, an even better riff and – ultimately – a brilliantly simple hook.  This number is guaranteed to reel you in and hold you within a minute of its appearance; it’s catchy, it’s heavy, it’s uncompromisingly brilliant.  ‘Spoils of a Portrait King’ has a superb sound that’s really brought to life by a fantastic production job.  To begin with, it’s business as usual with a mood that mixes Goatsnake’s heaviness with Fu Manchu’s love of a swagger, but it doesn’t last… The second half of this number brings one of the slowest and angriest riffs you’ll ever hear, taking doom to its most extreme.  Cranking out a slow chord repeatedly, guitarist Pat Pask attemps to take Crowbar on…and while some might find it draining, there’s no doubting it is a genuine musical force.

Adding a Sabbathy swing, ‘Micromegas’ shows Limb at their more accessible, with the interplay between bassist Sam Cooper and the even more guitar crunch brought by Pask driving the piece ever forward.  Atop a riff that would have never been out of place on ‘Sabbath Bloody Sabbath’ (albeit delivered a touch heavier), Hoey tears his throat out, each line coming with unrelenting volume and power.  The vocal might hamper some listeners’ enjoyment, but this tune – and most of those which follow – comes across so strongly, it’s positively staggering.  Here, Limb show an understanding of light and shade too, since this tune is bolstered by a moody mid-section that brings hints of the early Monster Magnet’s psych-doom tendencies, bringing in spacey lead guitar work with a cleaner tone.  Throughout this piece, with a barrage of snares and cymbals, Mowfirth proves himself to be a perfect fit for the band.

With the perfect balance between crisp lead guitar and a deep bottom end, ‘Sleepwalkers’ brings a great balance of rawk and classic stoner grooves, with howling bass notes cutting through a wall of sound. Rob sounds like a man totally in command of everything via his unrelenting roar, but it’s the riff that’s king – and the hard and basic sound that dominates could easily be one of Limb’s finest tunes to date.  Following an intro recorded in a rehearsal space, ‘Mortuary Teeth’ takes a side-step, blending Limb’s doom sounds with a sharper guitar motif and fantastic bass sound, the result straddling a sound somewhere between Hatebreed and Goatsnake – a sound that, again, is uncompromising and unmistakeable.  Along with ‘Sleepwalkers’ and ‘Micromegas’, with this number, Limb’s extant fan base will discover an instant classic.

At the close of the album, Limb finally allow themselves to revert to type (in the doom rock sense). Balancing out the shorter rockers, ‘Cocytus’ brings almost nine minutes of maximum riffage.  Dirty tones and huge grooves echo the noisiest parts of Corrosion of Conformity, at first dressed up in Limb’s heavy groove laden style, before descending into an oppressive, slow pounding doom riff.  Over the lurching and distorted riff, Rob vents loudly, repeating the same refrain over and over: “Hope without fear / faith…in yourself”.  It’s an odd juxtaposition between extreme positivity and a sound that suggests absolute nihilism and it’s surprisingly catchy.  After this has buried itself under your skin, Pat churns out a minimalist riff that mostly comprises of the same note chugging, chugging further until it sounds like one of the most primal sounds ever.  Rob’s still in there somewhere, but buried under occasional spaced out squalls of feedback – very much the domain of the earlier Monster Magnet – and a wall of vocal filters, it’s hard to work out what he’s trying to tell us.  This mangling of ‘Wheels of Confusion’ and ‘Planet Caravan’ represents Limb at their most obtuse, but even then, the nine minutes feel like an epic journey as opposed to a band just ambling or filling playing time.

Everything you loved about Limb the first time out is revisited here…and often improved upon at least threefold.  There are no needlessly wasted notes, no excessive flab or excessive jamming – just skull pounding riffs and a whole world of attitude.  ‘Terminal’ is quite simply brilliant, one of the best metal discs of 2015.