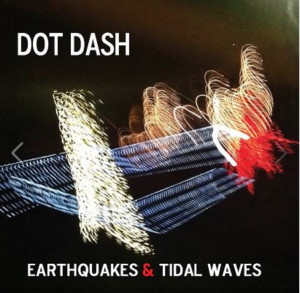 Although the name might not necessarily be familiar, Washington DC’s Dot Dash is a band with an impressive musical pedigree.  Vocalist Terry Banks was previously a member of St. Christopher and worked with Julie Ocean; with the latter, he also worked alongside future Dot Dash bassist Hunter Bennett.  Drummer Danny Ingram was previously a member of hardcore punks Youth Brigade and Sweredriver, while guitarist Steve Hansgren served key roles within Minor Threat and Government Issue.

Although having strong links with three pivotal DC hardcore bands, those unfamiliar with Dot Dash should not expect any of the band members previous jobs to have much of an impact here.  Dot Dash celebrates the sound of late 80s alternative rock and this 2015 release– their fourth disc – shows roots within The Replacements, The Only Ones and even Let’s Active, whose most famous son, Mr. Mitch Easter will be familiar to millions as R.E.M.’s first producer.  The talent within Dot Dash is enough to have secured Easter as chief knob-twiddler for ‘Earthquakes & Tidal Waves’.

With a hard rhythm guitar overlaid by melodic lead, the intro to ‘The Winter of Discontent’ perfectly encapsulates this band’s core sound within the first minute.  The lead guitar is infectious, as if J. Mascis decided to rein in his Neil Young fixation and attempt something a bit less angular, while a reasonable chorus makes for the feelgood factor straight out.  A selection of oohs at first appear unexpected within this menagerie, but the inclusion of such a shameless pop element lifts everything considerably – within two minutes, although separated by decades and geography, Dot Dash prove themselves a musical equal to ‘Bandwagonesque’-era Teenage Fanclub…and that’s never a bad thing.  A two minute belter, ‘Flowers’ cements this retro pop cool, by mixing those previous sounds with a post-mod energy with hints of The Jam and early Supergrass.  An absolutely killer chorus melody and more oohs shamelessly aim for the gut, while a busy bass provides a highlight.  So good, in fact, there’s so much temptation to spin this track again and again…and that’s before you’ve heard the rest of the record.

The post-punk guitar chops of The Only Ones can be heard blazing through ‘Rainclouds’, a jaunty affair with a lead guitar that constantly beavers, threatening to derail as much as add melodic lines, while ‘Semaphore’ is slightly more reminiscent of the nineties scene – more specifically ‘Let Me Come Over’ by Buffalo Tom and those great albums from the Slade/Kolderie production stable at Fort Apache.  It doesn’t necessarily appear that way at first, presenting as it does a darker intro of discordant guitar and a drum motif that instantly recalls XTC’s ‘Making Plans For Nigel’, but once Hansgren hits his stride, it’s another potential classic.  The jangling neo-psych sixties influenced ‘Tatters’ is what might happen if Jim Reid of Jesus & Mary Chain wrote a tune for Steve Kilbey of The Church.  The combination of power and melody combined with Easter’s deliberately retro production style results in something friendly, optimistic and magical.  It doesn’t stretch the talents within the band too much – and has nothing in common with their DC hardcore youth – but each player brings something solid, never too showy, always allowing the melody to guide them.

Elsewhere, ‘Transparent Disguise’ marries an easy vocal against a hard jangling guitar.  The core sound is that of the Minneapolis and Boston scenes of the early nineties, with hints of ‘While You Were Out’ era Soul Asylum and Ben Deily’s input in the fledgling Lemonheads.  While the guitar brings a strong melodic presence, it’s the bass – presented high in the mix throughout, once more – that really impresses.   Bringing variety, ‘Sleep Sleep’ is a woozy low-key affair exploring dreampop influences throughout its first half, as a deep bass wanders through a melodic route, while echoes and reverb expand the other worldy qualities.  Echoes applied to the vocals show a throwback to the gentler end of the UK shoegaze scene.  It’s a great way to end a great disc, thoughtful and mellow, always familiar.

‘Earthquakes & Tidal Waves’ may be more of a celebration of its past than a record that seeks to expand on these ideas, but sometimes that’s all you need.  If you have any interest at all in music that evokes such a strong memory of the nineties or an emotional connection with the Fort Apache associated acts, then this release is an absolute must.