In January 2014, Brad embarked on their first full European tour. Twenty years after the release of their debut album ‘Shame’, you could say their visit was overdue.  Unsurprisingly, their appearances at medium-sized venues were a sell-out and their London show in particular was an amazing experience.  UK Fans finally got to hear tracks like ‘Buttercup’ and ‘Screen’ live, and the experience did not disappoint.  Given that response, it seemed possible that Brad may even return at some point, but in April 2015 something even more unusual occurred.   Their frontman, Mr. Shawn Smith, returned alone for a short run of one-man shows at a few very intimate venues, the run ending at London’s Bush Hall.

Upon arrival, Bush Hall seems more suited to a town meeting than a gig.  However, Marillion’s Steve Hogarth played a superb set in this very room almost ten years previously and soon it will be host to the legendary Tim Finn, so the building obviously works in terms of musical performance.  The beautiful period detail on the walls and ceiling is totally in contrast with the beer stains on the carpet; a few people mill around, while a bearded man seated on the edge of the stage has a crafty pick of his nose while he thinks nobody is watching.  Just before the arrival of the night’s supporting artists – London based folk-pop quartet Up Down Go Machine – a few more figures filter from the bar into the main room.  Even Shawn Smith is wandering around.  The room appears very friendly and once the music begins, it also becomes clear that this building has fantastic sound quality. 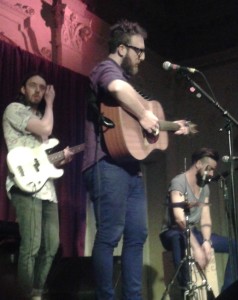 Filling approximately half an hour, Up Down Go Machine give everything their all, their semi acoustic sounds bristling with life.  Percussion is minimalist with their drummer seated upon a box which he marvellously choreographs into a full orchestra of beats, while frontman Stephen Hallwood demonstrates a powerful, although very natural voice.  From the bottom of his lungs, he shows off a strong presence and his acoustic guitar shows a great wear to the body…the sign of hard working musicians.  A selection of acoustic pop/folk goes down well with the attendant audience, before a strong a cappella offering really demonstrates a tightness within this musical unit.  Up Down Go Machine are a rare example of a support band you’d actually want to see.  If they happen to be on the bill somewhere you also happen to be, do yourselves a big favour; put down the overpriced lager, drag your arse out of the bar and give them your full attention – they really deserve it.

Naturally, just before the re-emergence of Shawn Smith at 9pm, the room swells with people and the heat rises.  Talking the stage to polite applause and a few cheers, Smith seats himself behind his keyboard and launches into a few improvisational flurries, shifting awkwardly upon his stool, pulling a few grimacing faces as if he truly feels what he is playing.  Within the busy notes, melodies rise and fall, sometimes sweeping, sometimes deep and ugly, and just at the point it seems to be really going somewhere, he stops…and then the familiar opening notes of the Satchel classic ‘Suffering’ float above the heads of the crowd.  Easily the finest tune on ‘EDC’, on this occasion it sounds utterly majestic, with Smith pouring real passion into each vocal refrain.  Naturally, this is greeted with a sizable cheer, but not big enough for Smith, very insistent that more noise could be made.  The audience dutifully responds with a roar.  A great start to the set.   ‘Some Never Came Home’, a beautiful Brad song concerning loss is equally revered, especially after Smith tells of how it’s a song about death – more specifically Layne Staley’s, and how Staley hadn’t even passed when he wrote it.  The music sombre and the lyric poignant, this track seems ever more touching knowing of its inspiration; “we don’t know when our friend will die” a line now hitting home with incredible power. 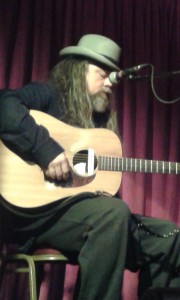 Fan favourite ‘Screen’ sounds absolutely amazing within the small room and a couple of faces at the front of the audience struggle to hide their emotions. Smith, meanwhile, tackles the stripped back arrangement with the respect it needs, and much like ‘Suffering’ it’s so clear that he is in touch with each passing note.  Inviting the audience to participate on the closing “ba ba”s, he gains a reasonable response but insists the crowd can do better and, indeed, for the repeated refrains, everyone – including Smith – does their best to raise the detailed Edwardian roof.  The second part of what is undoubtedly a gig high point finds Shawn stepping out from behind the piano and sitting to one side of the stage with an acoustic guitar.  What follows is quite wonderful as he reinterprets the Mother Love Bone classic ‘Crown of Thorns’ as a meaty blues number.  This shows his musical range as well as tapping into the tougher edge of his vocal in a faultless performance. 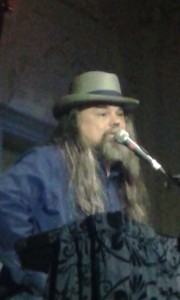 The closing part of the main set brings a thoroughly charming and emotive take on ‘Buttercup’, much to the delight of everyone.  A tune heard a thousand times by all here, the enjoyment of hearing it time and again never pales.  This opportunity to hear it live once more gains enthusiasm from all.  Returning for a brief encore, Smith lifts the mood farther with a jaunty take on Brad’s ‘The Day Brings’, before inviting everyone to join on Prince’s ‘Purple Rain’ – an exercise that falls a touch flat in places.  Parts of the crowd seem indifferent to Prince and even faced with the woo-hoos of this most famous tune, they don’t always give it as much welly as they should.  Shawn, of course, is having a blast, reinterpreting the work one of his musical heroes.  The end of ‘Purple Rain’ segues into a piano rendition of ‘Crown of Thorns’, linking back to an earlier moment of the set, before Smith leaves the stage to rapturous applause.

Although a little short at approximately seventy minutes, all of the crowd knows they’ve witnessed something special.  This has been an amazing gig…and Shawn probably knows it too.  Here was a man tapping into a catalogue of superb songs, the intimate setting only making them shine ever more brightly than before.   Given the responses received at both this show and the earlier Brad show, it’s obvious that Shawn has a loyal following in the UK.  Will this inspire another return…maybe even with Satchel? This is a man with more music inside him, music that needs to be shared with the world. Who knows what the future holds?