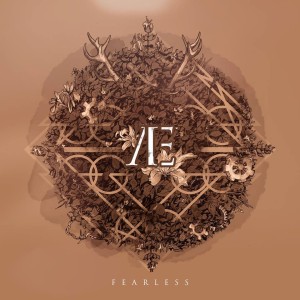 ‘All Hail The King’ firmly sets the band’s intentions in stone with a shrill guitar rhythm and the kind of heaviness befitting Avenged Sevenfold.  The riffs are tough enough to grab your attention almost immediately, then once Mr. Pilgrim starts shrieking, things step up even farther.  There are a couple of unexpected time signature shifts on hand to keep things interesting, but everything hangs on the chorus here – and thankfully they’ve afforded their huge riff an equally big hook.  After four minutes of these guys and their full-scale crunching, Alter Eden sound like a real force.  Keeping up the heaviness in places, though a little more accessible due to a couple of moody, quieter passages, ‘Broken’ kicks off with a repetitive riff that leans towards a Tool influence, with Pilgrim asserting himself vocally between each riff cycle.  A more classic rock bent colours the chorus with a full compliment of guitars and another slightly waily vocal, but there’s a continued influence from more alternative sounds that really impresses.  Brief thrashy bursts push things into heavier territory, but by the time things settle down for the tunes second half, the band prove themselves to be very adept in an almost post-grunge scenario.  The riffs are big and forceful, Pilgrim’s natural voice sounds fit to break in places – his louder notes delivered in a way that almost seems without care, though the resultant performance shows a great energy from all concerned.

Teasing with something more melodic, ‘Let’s Be Fearless’ opens with clean guitar and hushed vocal, but any pretence of heading into alt-rock balladry is quickly abandoned with the arrival of a crashing guitar riff which drops in and out of the musical frame throughout.  However, unlike the previous tracks, it’s not always the heaviness which impresses here – the real attention-grabbing moments come when the band pull back. During quieter verses, Coleman drops in more more complexities via staccato notes – hints of Andy Summers and Alex Lifeson in his playing, always showing a great potential.  These parts alone make this one of the EP’s easy standouts, but those looking for something noisier still should not go away disappointed; like ‘Broken’ there’s enough grit here to really make Alter Eden’s presence felt.  Blending an uneasy, stabbing vocal with a deep bass groove, ‘Crosses’ shows off a top prog metal stance, again with a huge debt to the mighty Tool.  The deeper vocal has more than a passing resemblance to the great Geoff Mann (RIP), before the band explode into a flurry of alternative rock noise on the chorus.  With a huge amount of overdriven guitar chops, an interesting vocal and heavy bassline, these four and a half minutes are a terrific display of Alter Eden’s talents.

‘Scream at The Sky’ makes a strong feature of the bass once again, the bulk of the tune carried by high notes, over which Pilgrim croons and cries with supreme confidence, his sound settling somewhere between Geoffs Mann and Tate.  Abetted by some chunky guitar riffs and a hook allowing the vocal to raise into a scream, the band launch into an unstoppable mid-paced chug throughout the second half; it’s force and near monolithic tones threatening to kill any previous melodies, but utterly fantastic.  Channelling more heavy riffage, ‘Fade’ brings a fine groove, combining heaviness with some equally fine vocal harmonies.   In some ways, this is Alter Eden’s most complex piece, vocally speaking: a world of whoas are on hand to counterbalance the lead vocal wails, while a few atmospheric whispers, jagged shouts and unexpected oohs flesh out other parts of the song…between them, aside from a little crooning, the whole rock spectrum is covered.  Place this choir of voices against yet another unrelenting riff and it becomes a tune that in many ways represents everything the band is about.

By the time you’ve become accustomed to the vocal style, Alter Eden’s charm becomes quickly apparent.  There are no weak links among these six numbers and there are plenty of sharp grooves to ensure heavy enjoyment.  In short, ‘Fearless’ is a brilliant first effort.