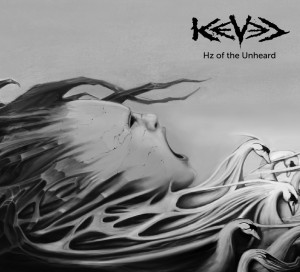 Kevel are a Greek quartet specialising in a style of metal that crosses several subgenres to create a huge slab of sound.  On this debut release, there are moments of progressive metal complexity fighting to be heard against huge blocks of instrumental post-metal and sludge.  While there isn’t a vocal acting as a central element from everything to pivot, the tunes are huge and often demanding on the listener; each one exploring different intense musical terrains.

The band’s intentions are set out for all to hear on the storming opener ‘Pavlova’, a tune comprising of just under six minutes of heavy riffing, pulling elements from Earthless, Alice In Chains and Goatsnake in equal parts.  Between the slower and more oppressive sludge, there are flourishes from more complex influences – a few bars of off-kilter prog tease around the mid point; cleaner guitar tones add unexpected melodies as Katsos Katsoros and Markos Samaras trade riffs and crisper melodies.  Somewhere amid the impressive noise, bassist Antonis churns out a grinding, opressive death rattle – his very brief turn breaking free of the oppressive sludge showcasing the sound of a man able to wring the hell out of just four strings. ‘EoD’ turns up the speed, allowing the twin guitar work ample chance to grind and shred – although a few of the lead parts appear a little lost in the deep, downtuned swamp.  Once again, though, the riffs here are absolutely first rate: muddy and  threatening and yet showing a high degree of complexity.  Leading into the track’s second half, the guitars plough headlong into the wall of sound, one retaining a deep chug, the other increasing the intensity with a strangled thrashiness nearing the more pneumatic elements of black metal.  With this opening couplet, Kevel go in with both feet first and with absolutely no messing.

‘Siphon of Sin’ brings even more of a cheeky nod to a more Earthless/Karma To Burn style of riffery, albeit delivered with a groove metal edge.  In terms of melody, this is one of the album’s standouts, the stripped back relative simplicity of these riffs creating an instant head-nodding appeal.  With the quieter elements taking hold, we are given a better insight into drummer Thanasis Politis’s sense of rhythm, constantly shifting the time-sigs between the slow and measured or more jarring progressive elements, a crucial part of the complex Kevel sound even if the guitars often appear to dominate. Closing this particular piece, a tolling bell and a slow, much cleaner riff pushes everything into classic doom territory.  With the subsidence of grinding elements, an older sounding guitar part cries briefly with tones that pull straight from the Tony Iommi school of bluesy lead.

Breaking into even doomier territory, ‘Seeds of Famine’ paints a bleak musical picture all round, with a grumbling bass bringing a hefty bottom end – often fighting to take the lead – before twin guitars crank out some deep grungy sounds.  The beats are slow, the riffs slower; in terms of oppressive heaviness, this is Kevel at their most uncompromising; the slow grooves crawling, mixing up classic Sabbath-isms with the relentless chug of side two of Black Flag’s ‘My War’.  At the point where their listeners could break, its out with the thrashy drums and everything kicks into a post-metal shred; the rhythms have a sharp attack, while lead notes bend with a pleasing ugliness.  Cranking things farther in the second half, the bendy post-metal is intercut with a deep grind worthy of melodic death metal – excellently played by all.  That would be enough, but to top everything, there’s a lead break that teases with eastern motifs, adding a huge amount of melody to a particularly intense eight minutes.  In their usual spirit of shifting everything up a gear each time, the title cut closes the disc with some particularly interesting slants on post-metal and doom.  The opening section is surprisingly clean, twin guitars laying down a haunting melody before everything decends into a black metal infused grindfest.  As before, the string bending is impressive, but rarely as cool as the tendencies to wallow in Sabbath/Earthless doom-grooves, and here the grooves and melodies are stronger than ever.  The clean old-school leads in the right speaker channel adding a really accessible slant, totally in contrast to the full on sludgefest which eventually ensues.  Keeping the sludgy riffs going apace for the better part of six minutes shows Kevel’s wall of noise approach to be a real DIY force.

With forty minutes of maximum riffage on this debut full length, Kevel make a real statement; ‘Hz of the Unheard’ is a DIY disc that should be investigated by all fans of this style. The instrumental approach means that the riffs are nearly always at the forefront of everything, but the playing is of such a standard that there are rarely any moments where you’ll find yourselves hankering after a vocal melody or any other obvious central point.  In terms of heaviness versus imagination versus classic doom riff, Kevel have all the bases covered…and then some.