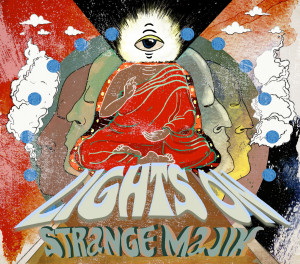 Strange Majik mainman David Pattillo is a well known studio hand from New York, whom between 2011-2013 was most often seen as half of garage blues duo The Dead Exs.  After two excellent albums in that stripped back and distorted style, his Strange Majik project finds the multi-instrumentalist spreading his wings.  Pattillo’s Strange Magik guise is primarily a vehicle to experiment with a world of music that largely would never have fit The Exs straight ahead mood and also allows him to work with a revolving cast of musicians and vocalists.   The end results straddle funk and r ‘n’ b, with a swathe of old fashioned psychedelic guitars beefing up the sound – the message here is to close your eyes, open your mind and feel the majik.

Blues fans will find some enjoyment from the lengthy ‘Love On High’, a slow groover that retains the fuzzy guitar sound of his garage band, but allows his playing to stretch much farther.  In almost eight minutes, those noisy guitar sounds are tempered by some heartfelt clean playing, closer in spirit to the electric blues of the early 60s, while electric piano tinkles pay homage to Ray Manzarek and more specially the trippier parts of ‘Riders on The Storm’, while the loose jazz-rock drumming courtesy of Felipe Torres holds all the pieces together.  Occasional vocals repeating the title refrain add extra interest, drenched in echo; the resultant sounds are the work of a tight studio unit, much as if Beck had decided to rework the slower sounds of 1970s Santana.

Moving on, though, huge chunks of ‘Lights On’ aren’t especially pitched at the blues or rock fan and especially not those looking for a continuation of The Dead Exs.  This a record for the funk driven, the acid-jazz head and those who want a different kind of attitude from their vinyl grooves. The title track in particular is full of big beats – thankfully provided by a real kit – over which MC Phase One raps his wordy mantra.  A counter vocal provided by Melanie Charles lends a more soulful flair, but it’s the bass work throughout that provides this tunes real heart.  Trading in his distortion pedal for bass, Pattillo is hugely adept with the four-string, churning out a hard funk groove that although isn’t up there with Bootsy Collins (but then few are), would most certainly be a match for anything you’d care to pick from the Beastie’s classic ‘Check Your Head’.   Similarly funky, a hard strut powers ‘Livin’ It’, another rap-based outing with a simple jangling rhythm moving things ever forward.  A little less bass, a touch more guitar, a simple refrain and the voice of a man who sounds at times like a more palatable version of Cypress Hill’s Sen Dog, this is great for the style – likely to appeal to those who wish The Brand New Heavies brand of acid jazz was a little less “coffee break”.

Deep electronica beats and a slow rhythm pushes the funk closer to twenty-first century r ‘n’ b during ‘Love That I Got’.  The basic track is surprisingly solid for the style and Fiona Silver’s lead voice is naturalistic. Thankfully they’ve stayed away from any Akon style autotune, for those not keen on the style, the deep soul element isn’t likely to strike much of a chord.  Luckily, things pick up again with the clanky ‘Love Will Find You’ pitching a hard lead voice (courtesy of Valerie Broussard) providing a strong melody, while Pattillo’s own is on hand for an almost spoken-word Gil Scott Heron styled performance.  Where this track might otherwise feel disjointed, a few “whoo-hoo” voices add extra melodies, while occasional echo-drenched lead guitars wail from the left speaker channel.

Best of all, ‘Diggin’ on The Higgs’ hammers home a fat drum beat and equally fat bass – like ‘Gimme Some o’ That’ by The Brand New Heavies with a severe attitude adjustment, while Pattillo wails guitar leads that sound like shards of The Isley Brothers’ ‘That Lady’.  With loops and echoes to befit Prince at his most rockin’ and Beck at his most needy for the two turntables and a microphone, this is Strange Majik’s finest hour.  Bringing more spacious moods and a sound that invites much volume knob cranking, ‘Country Road’ is a slow-burner of a track that has a rhythmic edge that hints at Moby at his most melodic, adding a meaty bass and echoing voices.  If electronica and sixties blues merged with ‘Maggot Brain’ by Funkadelic and overseen by Don Was, the results might just sound like this.  The largely instrumental air combined with a thoughtful bass loop and a strong focus on melody makes this an easy highlight.

The array of underground talent called upon to make this Strange Majik a reality is impressive and in the right setting at the right time of day, there’s much to enjoy here…despite the potentially hit ‘n’ miss nature of the material.  It’s the kind of record where different days will uncover different things and no two listeners will hear the same things.  While probably of most appeal to people who enjoy records by Maxwell, things from the Talkin’ Loud label and Beck at his most Prince-like, this mix of funk bass, clavinets, rap and soul vocals could alienate those who came looking for more Dead Exs fury, but David Pattillo should be congratulated for not wanting to be stuck in a rut.

1 thought on “STRANGE MAJIK – Lights On”