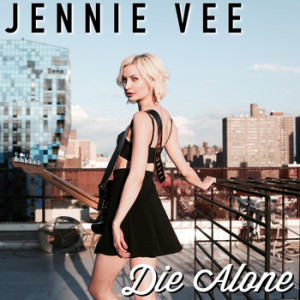 On this five track EP Toronto born, New York based singer-songwriter Jennie Vee is set to melt the hearts and heads of those whose musical tastes hark back to the early-mid nineties.  Maybe not those who reminisce about plaid shirts and muddy fields and blonde unshaven men with a glassy stare, but those who hold fond memories of seeing the faces of Tanya Donelly and Miki Berenyi gazing blankly and unobtainably from the pages of NME.  Vee’s recordings hark back to a time when Frank Black and Kim Deal liked each other (okay, so maybe there was never such a time); a time when you got excited about that next 12” single from Chapterhouse; when Ride were kings of their own UK kingdom and The Jesus and Mary Chain wanted you to venture under ‘April Skies’.

From the instant the opening track ‘Die Alone’ hits, the dark mechanical moods and dreampop tones almost take on the mantle of a wave, set to engulf the unsuspecting listener, to sweep them away in Vee’s otherworldly charm.  And straight away she’s got you.  Programmed drum loops mark time under and echoing guitar part and deep droning bass – almost gothy in execution – but the contrast with Vee’s vocal – coming across like a more wistful version of Metric’s Emily Haines – is what really captivates.  It’s not all style over substance either; looking past the multi-tracked and filtered voices and the mechanised beats, there’s a great melody and hook.  Few could make the repeated refrain of “you live alone, you die alone” sound quite so appealing.

Just as you’re expecting more of the same from then on in, she steps things up a gear.  Taking a harder stance, ‘Wicked’ channels many great nineties sounds, particularly those within the 4AD stable.  Multi-tracked voices bring a whole world of harmony and melody, while musically, sharp guitar chords rattle throughout with hints of early Cure at their heart, something reinforced by a deep Simon Gallup-esque bassline.  The combination of jangly tune and gentle voice will more than appeal to those who enjoyed Belly back in the day, although it may be fair to say that tackling these musical canvases with an element of hindsight, Vee outdoes her core influences.   A three minute charm, ‘Say Goodbye’ is another jangly affair, with the guitars extra cranked.  While still clearly the work of the same singer-songwriter, the increased reverb in the guitar lines and incessant percussive rattle in the right speaker channel brings to mind many bands associated with the 4AD label in the early nineties – but the shoegaze and pop collision is perhaps closest in spirit to earlier recordings by the much-missed Lush.   As everything falls away at the midpoint, exposing an overdriven guitar chord and simple rhythm, it’s hard not to be reminded of The Jesus & Mary Chain, although Vee adds plenty of her own style to proceedings.  As with the previous tracks, a simplistic hook is designed to invite singing along – and most importantly memorable enough to inspire regular plays.

The relatively brief ‘Gone Away’ recycles moods from prior numbers while focusing on another simple and direct chorus, before ‘Red Flag’ brings this listen to a close with great alt-pop style.  There are still plenty of guitars to hand here, but the riffs are sharper and cleaner, befitting the pop vocal that hangs in the air – especially catchy with the repetition of certain lines throughout the song.  Most impressive of all is a crisp, crying lead which raises up on occasion – far less in keeping with the shoegazy elements of most of the songs and perhaps closer to the pop/rock stylings of the vastly overlooked River City People, but again, only if they’d had their works re-tooled by Transister, Metric, Garbage or any of their ilk.   Just as the opener ‘Die Alone’ showed what Jennie Vee could do with a swooning, quasi-dark musical scope, this closing tune is almost its opposite, showing her best pop side.

Although comprising just five songs, this is a stylish release.  Retro, yet somehow totally relevant at the time of its release, it’s the kind of sound that Metric might just make if they turned up the guitars a little more once in a while.  Pop hooks, accessible melodies and enough distorted guitar to ensure the material never feels too saccharine or throwaway…you couldn’t ask for more.