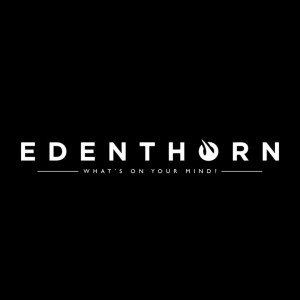 Hailing from Durham, alternative rockers Edenthorn mix up a range of styles on their debut EP, ‘What’s On Your Mind?’.  While never shy in flaunting a few of the nineties grungy sounds that clearly made them want to become musicians in the first place, some of the material on this release also comes with a surprising amount of melody and occasional funkiness – like Pearl Jam had decided to channel the radio-friendliness of Three Doors Down and Dishwalla.

This blend of styles is hinted at during the opening number ‘Time For a Change’, an optimistic three minute affair kicking off with a busy guitar riff and hard drum snares.  Things quickly settle into a groove with a wall of chiming guitars and a verse that flaunts a funky flair over which vocalist Kyle maintains a strong presence – his strong and natural tones taking the bulk of the melody.  Very much the model for solid but ordinary on first listen, its a number which grows in appeal with passing time.  On subsequent plays, Kyle’s voice still stands strong, but more of Dylan’s guitar flourishes present themselves – the opening riff proves enduring in appeal and his lead break is aggressive, yet tuneful.  The band are clearly holding back here, though, and have made an artistic decision not to show their strongest side straight out.  From here on, ‘What’s On Your Mind?’ is vastly improved.

Temporarily losing their funky swagger, ‘Saviour’ stokes up the rock quotient.  Teasing the listener at first with an unaccompanied ringing guitar that’s strongly influenced by Foo Fighters, drummer Mark crashes in with a force and Edenthorn then power through an unashamed 90s riff that borrows heavily from Nirvana’s ‘Radio-Friendly Unit Shifter’. Guitarist Dylan attacks his instrument with a quasi-punk crunch, evoking the spirit of Cobain and instantly making it necessary to crank the volume knob to the right while bassist Faiba beefs everything further.  After a few bars of this to warm the listener through, things then drop into staccato riffing for the verses.  The band still retains their sense of presence, but quickly shifts the power from Dylan to Kyle to take centre stage. His voice has an old-school charm, a natural tone and a definite presence.  Crashing into the chorus, the fuller sound re-emerges, with the guitars throwing out a huge alt-rock riff and Kyle’s voice joined by a harmony from Faiba.  In terms of homage to the nineties, this is terrific stuff – the dynamic between the musicians is tough, while the main hook is strong enough to match the driving riffs.

Almost sounding like a different band in places (especially if directly compared with ‘Saviour’), ‘Life & Death’ is an absolutely superb tune.  There are still hints of alternative rock at its core, but ringing guitars have a strong sense of all things melodic.  The funkiness hinted at during ‘Time For Change’ finally finds its feet and the band tackle a number that could sit comfortably alongside the work of Three Doors Down. A really funky intro shows yet another edge to the band, while a bass filled verse is restrained – a warm sound throughout complimented by a dual vocal between Kyle and Feiba, with elements of Four Star Mary shows the band in a very strong position.  The guitar chops are lovely, the understated bass work and vocals even lovelier. Finishing off with a huge, lolloping riff and full barrage of whoas, Edenthorn seem fully aware they’ve created something epic here.   ‘The Final Straw’ pulls most of the band’s gifts together for a last rocker, and while the vocals seem set to dominate, it’s worth keeping a closer ear during the verses:  clean guitars noodle throughout thus creating a more interesting backdrop than the bulk of alt-rock, while deeper still, the basslines show a surprising complexity.  Like ‘Life & Death’, this shows all four musicians play a very important role, and should any one of them be replaced, the dynamic within the band would undoubtedly change.

The seeds of something special have been sown on these four tracks, with vocalist Kyle in particular displaying a natural talent. Retro sounds delivered with a youthful energy show some great promise and although the overall production budget shows occasional limitations, ‘What’s On Your Mind?’ is a hugely entertaining debut.