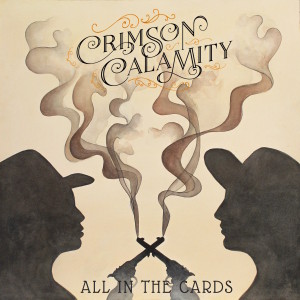 US singer songwriters Lauren Harding and Mallory Trunnell have already made inroads into solo careers as adult pop singer-songwriters:  Harding’s brand of pop/rock on her 2011 release ‘Heart In a Box’ mixing piano tunes with occasional bluesy twangs, Trunnell’s more in keeping with Sara Barailles and piano pop.  Together, recording as Crimson Calamity, the pianos are abandoned and various types of country music very much the order of the day.

With opening track ‘Dead Man’s Hand’, Crimson Calamity lay their cards firmly on the table in a tough tale of gambling set to a tough alt-country sound.  Beginning with a finger picked acoustic guitar riff, the natural heart of the duo’s music shines through, with Harding’s hard-edged voice and Trunnell’s gentler approach evident as they trade off each line.  With the addition of a stomping bass drum and twangy dobro, the country styles assert themselves behind the tale of the killer’s gun, but  It’s with the second half of the song things really start to cook, as they say.  The previous finger-picked elements bolstered by a hefty electric crunch, peaking with a fairly raucous solo.  For those looking for a bit more rock with their country, the aptly named ‘Rock Bottom’ comes with sense of self-importance and a swagger that sets off the dual voices quite nicely.  The harmonies are simultaneously tough and sweet, so if you were unsure of the vocal talents previously, this should convince you.  Musically, the combination of muted electric rock rhythms and countrified slide guitar noodles and an unavoidable twang in the vocal works exceptionally well.  While a tweak here and there would place this in the same frame as Matraca Berg’s harder material – in terms of performance and arrangement, this is Crimson Calamity’s finest four minutes.

Having done their best to catch the ear with some rock-edged sounds, it’s time to stoke up the country. The rollocking two-step ‘Line Em Up, Shoot Em Down’ works a mean vocal melody from Harding around a walking bassline, the curl in her voice reminiscent of Elise Rogers (formerly of pop-ska band Dance Hall Crashers).  Trunnell voice in turn more than brings a melody and tone that’s hugely complimentary.  While more in keeping with country traditions than the rock that colours the previous numbers, it isn’t syrupy by any means; the ladies’ sense of attitude cutting through every line.  Looking beyond more impeccable harmonies, the chorus hook of ‘bartender, line ’em up, we’ll shoot ’em down’ is particularly snappy and with the voices topped by occasional Bernie Leadon-esque banjo and a rattling drum part, the results are rather fun.  Last up, ‘Pistols’ offers little for those looking for southern sounds or meaty country rock, revisiting a very old style country.  The tale within is a dark one warning that men should fear the worst should they leave their pistols at home, while the defiantly country waltz is so hammy in a Tammy Wynette/’Home On The Range’ pastiche, the band have surely delivered it with tongues planted firmly in cheek.  Of the four tracks, this is arguably the weakest, but it’s general tone would suggest it isn’t especially designed for more than a couple of spins.   That said, as before, you’ll find some pleasing acoustic work and a thoughtful dobro somewhere along the way.

The styles across these four numbers – although all country-based – are broad enough for each listener to pick a favourite, with a couple of the rockier moments really standing out.  The playing is solid, the song-writing better and the vocal arrangements better still.  ‘All In The Cards’ is a fun debut from Crimson Calamity, showing the pairing of Harding and Trunnell to be one with plenty of potential.