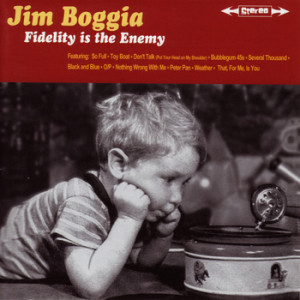 The album begins in a soft fashion, as ‘So Full’ pitches a clean acoustic guitar against a programmed drum loop.  Boggia, meanwhile, taps into a relatively sombre vocal, his delivery settling somewhere in Mike Viola territory.  The number gradually builds in its attempts at pulling at the heart-strings adding a warm bass, some gentle backing vocals, a real drum – layer upon layer, the tune gathering momentum with each verse.  It ultimately scores in its goal of winning over the unsuspecting listener, as sparingly used twelve-string gives a very late 60s vibe to the whole affair.  It’s one of those numbers which doesn’t feel that special at first, but by the time it’s all over, you might just realise you’ve heard something special.  In some ways, the far more direct ‘Toy Boat’ would’ve make a more striking opener, but then again, with its blending of pop and alternative rock guitars, maybe Boggia didn’t want to frighten any sensitive pop souls away since this tune hits surprisingly hard, especially given the preferred styles on the rest of the record.  Right from the outset, this tune has a sharpness and a rocking edge that’s daring for such a pop-based album. The drums lay down a particularly rigid rhythm, under which muted chords increase the sense of hardness.  Full sounding, dirty riffs take hold, before falling away to reveal a semi-acoustic pop flourish, setting up an effective push and pull between the two extremes for the duration. A mid section redresses some more pop balance by toying with some neo-psychedelic vocals delivered in a Brian Wilson inspired playfulness, before crashing back to earth with a discordant lead guitar break. Frenetic and unsettling, yet at once so complete, this shows the breadth of Boggia’s talents in an instant hit.  Sliding effortlessly into a segue featuring an echoed vocal and scratched record sample (revisiting the Beach Boys classic ‘Don’t Talk, Put Your Head on My Shoulder), most listeners should be won over by this stage.

If at this point you find yourselves contemplating what an enjoyable listen this has been thus far, things escalate further with ‘Bubblegum 45s’.  With a jaunty pace and a whole world of bouncing pianos coming across like Paul McCartney reimagined by Jellyfish at their most enthused, this ode to childhood and brightly coloured Fisher-Price records rests somewhere near the pinnacle of power-pop perfection.  Across those piano motifs that inform the core of the tune, ringing guitars and an old-fashioned flat drum sound keep the energy buzzing, before a tack piano steps in for a solo and various harmony vocals are complimented by glockenspiel tinkling.  It’s a whole world of 70s infused adult pop with echoes of childhood tugging at strands of memory . ‘Several Thousand’, offsets the listener at first by suggesting its going to be a quirky and disjointed affair; however, after a few bars things fall into place.  A solid bass underpins an acoustic rhythm, while an electric lead picks notes in the left channel.  Linking each of these, a melodic vocal acts as the aural focal point with Boggia in particularly fine voice.  Retro pop cool, indeed, made even better by the subtle use of mellotrons.  This is a great example of Boggia’s talents for timeless melodies and a recommended track for a first time listener. Coasting into the mid-point, Jim allows us another glimpse into his more reflective side.  Armed with only a hard-struck acoustic guitar, he takes us through an emotive five and a half minutes that places the musical protagonist (once again) somewhere nearer to Viola’s most laid bare material, Boggia’s naturalistic tones cracking on the louder notes, but that only adds to the human interest here. Having allowed us time to take stock of everything we’ve heard so far, the album’s second half is equally entertaining.

Following an extended intro of tuning up and general clattering, Boggia counts everyone in and ‘O/P’ quickly asserts itself as one of the album’s best cuts. It may lack the energy of ‘Bubblegum 45s’, but it makes up for that in many other ways.  A crisp rhythm guitar recalls the pop-rock sheen of the Jamie Walters disc from the late 90s, while a Fender Rhodes lays down a 10cc-inspired retro sound in the right channel.  Understated work from the rhythm section holds everything together while Boggia delivers a clean and heartfelt vocal melody.  You’ll hear similar sounds from many a late twentieth century power pop disc, but this is up there with the best – calling all fans of Jason Falkner and Will Owsley.  Having reached a second peak, ‘Nothing Wrong With Me’ trades in the classic pop chops for something a bit more whimsical.  A programmed samba shuffle provides the backdrop for a few minutes off slightly more marginal pop, although through good judgement, Boggia gives this a certain level of charm.  First, his own voice has the same level of charm evident on the other tracks, but he ensures it’s eventually at odds with the music  by rising to an angst-filled climax.  For the bulk of the tune, he’s also added plenty of interest via a choir of extra voices and backing vocals – including Jill Sobule, whose own work has never been shy of such kitsch-driven qualities.  A few spins in, this makes complete sense – if nothing else, it shows yet another facet to this modern-day Brian Wilson.

Tapping into a busy style that’s chock full of overdubbed parts (a la ‘Bubblegum 45s), ‘Peter Pan’ finds Jim Boggia going all out in the arrangement stakes.  Percussion scrapes and tinkles, bells and whistles have the presence of a child’s fairground ride crossed with the innocence of a musical box and then the magic happens.  The drums lead the whole band to the charge with a Beatle-esque flair; the keyboards chime and clang like the works of Roger Manning Jr, while samples of the titular character make it hard not to draw comparisons with Jellyfish and their own Disney-tinged ‘Joining a Fan Club’.  The upbeat music also has a positive lyrical theme to match as Boggia suggests that if we “think happy thoughts [we] can fly like Peter.”  As the piece builds to a climax, the amount of overdubs and samples becomes almost claustrophobic – sinister, even – with more bells and voices than even Jellyfish themselves may have thought necessary.  Listeners are almost certain to spot a cheeky homage to the Beatles’ instrumental ‘Flying’ for good measure – that classic tune informing this number’s other-worldliness as it pulls to a close after a rollocking five minutes.  You want indulgent pop?  Look no further; this is great.

Following the general bombast of all that, Mr. Boggia winds down with a pair of understated acoustic numbers.  He clearly understands the importance of sequencing an album properly – or else doesn’t want to leave his attendant audience hyped up beyond help.  ‘Weather’ is a folk-pop gem, pitching Boggia’s laid back vocal against a finger picked guitar.  The notes are crisp and clean, the voice very natural, giving the impression of a simple but polished demo recording.  At the mid point, a bass drum marks time, it’s presence filling the arrangement admirably and soon an extra guitar overdub adds extra depth.  It has the charm and grace of a more modern sounding Simon & Garfunkel recording, thus shifting the mood away from ‘Peter Pan’s kitchen sink approach with ease.

Even better, the woozy, late 60s inspired ‘That, For Me, Is You’ once again begs comparisons to the brilliant Mike Viola – partly in its reflective style, partly down to Boggia’s slightly worn vocal style.  The acoustics meet the vocal with the greatest of sympathies as such a tune requires, but it’s the addition of mellotron sounds and tinkling percussion that elevates the number to the higher level.  Like a one-man folk-Beatles, Jim Boggia taps into a timeless sound and ensures once the disc stops spinning, you’ll want to hear it again.  …And very soon.

Put together in over a hundred sessions and in eight different studios, it’s almost possible to hear the love that’s gone into each note of this album. Many years after release – partly thanks to its already sounding several years out of time – ‘Fidelity’ sounds sharp.  Vibrant performances throughout mixed with a near faultless production value ensures this album ticks many of the boxes for power pop fans across the globe.  File right next to Farrah’s self-titled release and Jellyfish’s ‘Bellybutton’ and mark “good times guaranteed”.