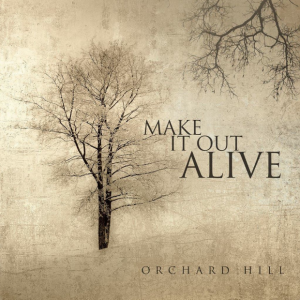 A self-released EP, Orchard Hill’s ‘Make It Out Alive’ comes with a surprisingly American sound for a quartet from Oxfordshire.  With some tough pop-punk/emo chops and a first rate production job from Ben Humphries [Maximo Park] and John Mitchell [You Me At Six], this debut is incredibly professional.  For the genre, you’d be hard pushed to find a better sounding release from bands with ten times the budget at their disposal.

The band’s potential shines through immediately.  Within a couple of bars of the title cut, the twin guitars have asserted their pop-punk credentials and settled on a sound that’s heavily indebted to Paramore, a comparison that is only strengthened once Tiff Nicholson begins to sing.  While her voice has a studio based shine – a trait that seems almost unavoidable with this genre at the time of release – she still maintains a very strong presence.  The rest of the band also present themselves well, having an almost boundless energy.  The dual guitars of Jamie Rogers and Mark Langlay-Smith possess plenty of crunch; their playing is tough, a sound boosted by that fantastic production, while a wall of keys bolsters everything further.  Meanwhile, the rhythm section power through in a relentless manner. This would all be pointless if the song wasn’t much cop, but the band throw a sharp chorus into the mix – the pay-off pairing the title line with some very, very infectious whoas, designed to appeal with crowd participation in mind.  On the surface, ‘Blame Game’ brings more of the same – the energy levels remain high, Tiff’s studio-based voice brings melody aplenty, but digging deeper, there are a few heavier moments lurking at either end, suggesting the band are capable of a broader musical scope.  The intro has a quasi-math rock choppiness, not too dissimilar to Marmozets (a band whom Orchard Hill have supported previously), while the coda makes a bigger show of the guitars once more, capturing Rogers and Langlay-Smith in great harmony.  Parts of their twin leads have a slight air of an Iron Maiden classic, though given the age of the band at the time of this recording – and their chosen genre – the influence could just as easily come from the Papa Roach debut.  Either way, there’s some good playing here.

Following two rockers, the band show off their more reflective side with ‘In Bliss’, a semi-acoustic workout.  Over the sparser musical backdrop, Tiff curls her voice around every line, her approach showing emotion throughout.  Accompanied by just acoustic guitar at first, it places her vocal in a more central role than the previous tracks. A second vocal courtesy of guitarist Jamie Rogers adds an extra layer and a gentle friendliness before the whole band pull together for the big climax.  As expected, the balladry of the first half is swept aside with the addition of twin electric guitars and rock drums for a fairly clichéd finish.  You’ve heard Paramore and Evanescence tackle this kind of thing before, but despite such over-familiar traits, Orchard Hill still hit the mark here.

These three songs show great promise.  Orchard Hill may not be shy of showing their influences, but the results speak for themselves. For fans of Paramore – or perhaps their Australian equivalent Tonight Alive – ‘Make It Out Alive’ is an essential listen.