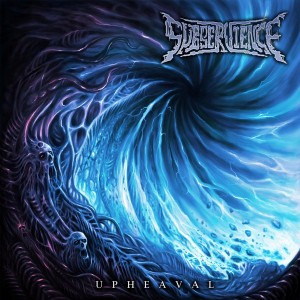 Following a busy couple of years yielding two self released EPs (one each in 2012 and 2013 respectively) and a truckload of live dates – including one in a town on a small island off the Kent coast – UK based death metallers Subservience showed no signs of resting in 2014.   If you thought that the departure of a frontman might set the band back, you couldn’t be more wrong.  With new blood and clearly invigorated by the near-endless touring, the band’s third release ‘Upheaval’ isn’t just hard, fast and generally uncompromising – it’s positively staggering.  As you’d expect, it’s top-notch in terms of production values and overall sound, but also in the complexity and quality of the material.

The title track doesn’t mess around.  After a few seconds of feedback fading in, a couple of beats signify the arrival of something huge.  Vocalist Dan Lofthouse kicks in with a guttural roar and the band launches into four and a half minutes worth of extreme thrash crossed with melodic death metal elements.  The verses fly by at lightning speed, driven by drummer Tom Newlands – a hugely impressive player who shows a tightness and technical ability as well as an ease when attacking such pneumatic rhythms.  The guitars grind relentlessly, with occasional riffs on the chorus bringing an influence from Obituary.   This is great, but it’s when the band slow down a couple of notches here and there they really sound special.  This melding of classic death metal vocals with death/groove metal backdrops is extreme, but care has been taken to ensure the shifting time signatures help maintain interest.

‘Inhuman Savagery’ leaves an equally strong impression.  Here, Subservience meld their death metal assault with a few different extreme metal flourishes. Not quite as obvious as during the instrumental break of the title cut, but nevertheless they’re there – and each handled with utmost technical brilliance.  The band’s flirtation with groove metal appears sporadically throughout and is most obvious on the chorus sections where the band’s heavy assault sounds absolutely terrific but also more melodic.  Make no mistake, it’s still positively skull-crushing, but great to see occasional shifts away from full on grinding. Elsewhere, riffs linking the verses bring a heavy downtune, although once Lofthouse launches into his full on growl – as indeed he does through most of the number – any dalliances with melody appear more fleeting and there’s enough evil throatiness to thrill the most demanding death metal fan.   It won’t appeal to everyone, but in extreme metal terms, you’ll be hard pushed to find five minutes filled in a more exhilarating fashion.

‘Slither’ brings more of the same – if you’re still with Subservience by this point, you’ll stay with them – but this track particularly highlights the talents of bassist Scott Bishop who appears higher in the mix. Right from leading the charge through a slow and grinding intro with a meaty bass sound underneath soaring lead guitars, he powers through verses behind death metal growls. During an intense groove metal interlude he cranks out furious bass notes in a style that not only compliments the wall of twin guitar riffs from Ryan Jardine and Martin Shouler, but almost seems tough enough to take them on at their own game head first. He even contributes a brief unaccompanied bass rattle at 1:55 (it would be great to hear more of this; his overall tone is superb).  Meanwhile, Lofthouse’s contributions are as forceful as expected: “You can’t hide from my rage…” he opines in a none-too-subtle manner and when combined with a juggernaut of a guitar riff and a brilliant drum performance, it’s hard to argue.

While each of this release’s tracks represent finely crafted death metal, it’s ‘Divine Malevolence’ which captures Subservience at their most broadly appealing.  This number is still extreme and there’s still more than enough pneumatic sounds coming from the drum kit, but for the second half, the choice has been made to wind things down a little, and so the band step down from full-scale death metal and move towards a brilliant and very technical groove metal sound.  The slower approach gives the guitarists a chance to shine, tackling music that shows influence from ‘New American Gospel’ era Lamb of God in addition to their more typical influences from classic death metal.  While instrumentally this number is the most varied, vocally there’s no real shift.  If you liked the first three numbers then there’s a great deal here that’ll impress.

The hooks aren’t always obvious on this EP, but then Subservience are far more about power, groove and all round intensity than choruses.  These four songs are the creation of musicians who’ve really clicked and are ready to really firmly establish themselves in the exteme metal world.  If you’re a fan of extreme groove metal/melodic death metal, then ‘Upheaval’ should be considered essential listening.