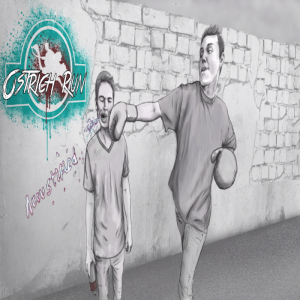 Although the bulk of the material on Ostrich Run’s debut EP could likely be stripped back and presented as simple acoustic pop songs, the recorded results do not resemble the kind of workouts perhaps suggested by its title.  While a chunkier electric sound brings a few layers for extra interest, it’s not long after affording the material some close scrutiny that it becomes clear that the Anaheim based duo’s songs just aren’t strong enough to stand naked in an acoustic format.  Attempting to cover patchy song writing, Ostrich Run throws a kitchen sink approach at most of their arrangements to detract from their empty sentiments – thoughts and feelings seemingly aimed at a young audience keen to move away from more disposable pop.

Things get off to a fairly appalling start with ‘Boundaries’, a number which actually pushes the boundaries of musical taste with a truckload of autotune.  As minimalist electronic sounds and a guest appearance from Sparky’s Magic Piano eventually give way to fairly a wet vocal and more electronic sounds,  You’d be forgiven for thinking you were listening to something wholly manufactured for fouteen year olds – and perhaps we are – and it’s a struggle not to just switch off instantly.  The emergence of quasi-dance rhythms aren’t helping.  But wait…what’s that?  There’s a pleasing warmth to the bass and the sound of something more sophisticated trying to break through the bulk of the song’s verses.   A pity, then, that an ugly synth straight out of the late 80s dance scene sometimes acts as a distraction and musical deterrent.    Just as quickly as they arrived, the synths are in turn pushed out by a few bars of chugging guitar – the sort of thing that provides the meat of the least interesting Foo Fighters tracks – and then, those too limp away unsure of a place in the big picture. At this point, any thoughts of this piece being manufactured are replaced by thoughts of this being a directionless mish-mash…  It’s like Ostrich Run have taken parts of four unfinished compositions and then glued them together in the hope of something actually working, What they’ve unwittingly created is the musical equivalent of Frankenstein’s Monster: bits sewn together in a hap-hazard manner, desperate for acceptance, sparks of something interesting but generally going nowhere fast.  There are a couple of reasonable trip-hoppy beats and occasionally a glimpse of something musical, but it’s not enough to make up for a lack of hook or any real direction. This didn’t ask to be born, yet here it is…but who’d actually want to hear it more than once or twice?  It’s horrible.

Moving on rather swiftly (and assuming Ostrich Run haven’t lost everyone with the horrible mess of ‘Boundaries’), the other three tracks are more melodic.  For starters, any use of guitar has more focus and thankfully the duo seems far less concerned with electronica and anything with a danceable edge.  Or, sadly, any music with an actual edge of any kind.  In terms of pop-rock, the remaining numbers may be better than the opening gambit, though none are remotely memorable in the long term, each tarred with a blandness lending itself to an undemanding audience…listeners willing to become slaves to whatever commercial radio pumps into their ears.

‘Steel’ is has a sharpness in its rhythm that contrasts the thin pop vocal very well. This is due in no small part to a crisp string sound and rattling acoustic guitar.  Joining the acoustic elements, drums and harder sounding electric guitars fill space to reasonable standard, although there’s time given to a riff that’s clearly inspired by 30 Seconds To Mars, thus reinforcing the feeling Ostrich Run may not be targeting the more mature listener. The huge approach applied to the chorus hook should’ve ideally resulted in something halfway memorable, but a fudgy, almost cloying closeness of each  instrument leads to the louder parts of the song sounding like little more than a barrage of sound. The lead voice, as before, is much of an acquired taste but the addition of a female vocalist bolsters any weakness in the that department. There are obvious faults here, but a strong rhythmic quality and great drum sound ensure this track just about passes muster – a shame Ostrich Run couldn’t have rustled up something with a sing-along quality.  Beginning with a soft piano, ‘Time Helps’ hints at piano ballad, but after a few bars becomes a standard pop-rock affair – all pleading, overwrought vocals and jangling guitars.  It’s like hearing a by-numbers emo band going for that pop hit.  It’s not by any means bad as far as empty radio filler goes, but it’s utterly void of imagination or spirit.

A jangly affair, ‘Everyone Pretends’ begins with a low-key guitar motif, before blooming into an almost Eastern sounding semi-acoustic workout.  Tough sounding acoustics lay down a solid rhythm, while strings bring a huge amount of melody and a rattling backline courtesy of some understated drums pushes everything forward.  As before, there’s a potential for Ostrich Run to turn this into something interesting, but again they come up short.  The vocals occasionally come across as a poor man’s Brian Molko with their slight wavering quality, but they seem better suited here than on a couple of the other tracks.  There are glimpses of a half-decent song, but things still come with a feeling of force; of trying to appeal to everyone with a passing fancy towards a vaguely alternative pop-rock sound (hey, those kids who like Fun. must listen to other bands, right?) but by trying so hard in this way, they don’t always hit the mark.  We all know you can’t please everyone, so why try?

On ‘Acoustified’, Ostrich Run present a few songs which have hints of good ideas but are often ill-judged. Most of the results seem forced or moulded to fit a pre-existing audience rather than being organic creations set free find an audience of their own.  Rather like the work of 30 Seconds To Mars or Elbow’s ‘One Day Like This’ – a stupidly dull and contrived attempt at anthemic song writing – the results are totally corporate…and much the worse for that.