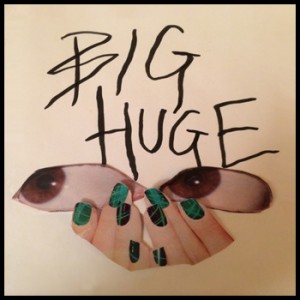 On ‘Don’t Be Shy’ – the second release from New York’s Big Huge – the band blends punky sensibilities with a ferocious new wave energy that instantly conjures up images guys decked out skinny ties and sunglasses.  Pulling various influences from the end of the seventies, the five songs on the EP throttle past at a speed that’s pretty impressive. Imagine Kurt Baker in a garage band playing after a weekend long amphetamine bender, or the tunes from the long-unreleased album by Texas power poppers True Hearts played at three times the speed and you’ll be halfway towards the band’s core sound.

‘Peripheral Vision’ starts in good stead with a distinctive and high pitched guitar riff that sounds like something inspired by Screeching Weasel’s ‘Hey Suburbia’ (possibly intentionally, probably not).  While initially seeming like an intro only, it soon becomes clear that this riff also acts as the track’s strongest hook as it beavers away almost constantly for the duration.  Atop that lead riff, the rhythm guitars are dirty – a garage punk edge creeping in on the bands brand of raucous power pop – and the bass is tough.  Frontman  Danny Regular does his utmost to make things edgier by delivering a distorted vocal that’s part spiky, part slurred like a slightly more focused version of Darby Crash, possibly alienating half the band’s listeners in the process.  This is raw… It may not have needed to be so raw, but there it is.

The EP’s strongest track ‘(Me & My) Radio’ has a better arrangement all round, with a buzzing energy throughout as the band tap into a sharp sound that’s strongly influenced by late 70s new wave and with that, a better final mix.  A great drum performance is complimented by a bouncy bass line, while the guitars careen and crash in a quasi-melodic fashion, speed always of the essence.    There’s some great music here and a great chorus – everything much better than on the opener, but given the more melodic tune, It’s more obvious at this point that the vocal style doesn’t necessarily come with a very broad appeal. In the hands of someone else (probably the aforementioned KB or Dan Vapid & The Cheats), it might grow into a cult classic, but given Regular’s insistence on squealing every word at full pelt it doesn’t necessarily reach its full potential.  ‘At The Movies’ follows a very similar musical blueprint – the band crank out their sounds at sweaty pace, showcasing the talents of a brilliantly sharp rhythm section.  Throw in a couple of interesting time signature quirks and a slightly crooned usage of the title to balance out the more garage aspects of the recording and it stands up well.

Having peaked with these two songs, the remaining two toy with different styles.  ‘Fall Through’ takes things down to a level that’s strongly influenced by 50s doo-wop and as such is closer to old-school power pop traditions than any Big Huge’s usual tack.  A clean and crisp guitar part shows a broader appeal, while the vocals are surprising.  Yes, they’re still buried under a fug of distortion, but they also work an unexpected croon that sounds rather more like Ed Robertson of Barenaked Ladies fame than Danny’s usual preferences.  Great to know that he actually has range…and its his choosing  not to use it is purely for stylistic effect.  Throw in some old fashioned backing vocals and handclaps and this is a winner, even though the band decide to revert to type for the mid section (ie: eschewing the classic power pop in favour of speeding up as much as possible in order to accommodate a raw garage rock guitar solo).

Finishing the EP, ‘Blackout’ dispenses with most of the quasi-melodies altogether and a rock ‘n’ roll riff dusted down and delivered with punky intensity provides the bulk of the tune, while a wall of distorted vocals make everything feel a tad claustrophobic.  If it were hard to determine any of Big Huge’s lyrics up to this point, on this track they ensure it’s almost impossible to decipher any of Dan’s ranting.  You’ve gotta hand it to them – these guys come with a frightening amount of gusto, but here more of a melody would be preferred, especially since some decent guitar licks are in danger of being buried under the general raucousness.

In some ways, the best tunes would be more interesting if scaled down a touch: it would be good to hear  ‘(Me & My) Radio’ delivered in a Nick Lowe inspired arrangement, or ‘Fall Through’ with the love and care afforded to Badfinger or the Raspberries…something more befitting of the old style hooks lurking beneath the surface.  Since speed is clearly important to this New York outfit, that’s unlikely to happen, of course.  As it is, after a few spins, the vocals are less grating – as is so oft the case with such “quirky” things – and there are enjoyable moments on hand for those willing to invest the time.  Listeners who are happy to be swept along with the band’s general bluster without digging too deeply will get the biggest kicks out of ‘Don’t Be Shy’, but there’s a feeling that with a touch more finesse, this EP could’ve been stronger.