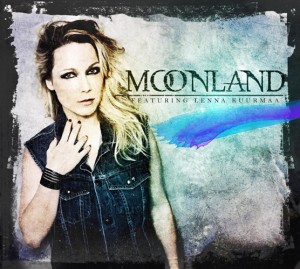 It seems somewhat unfortunate to suggest it so bluntly, but this vehicle for Estonian vocalist/media celebrity Lenna Kuurmaa (previously of pop-rockers Vanilla Ninja)  is absolute, bog-standard production line stuff from Frontiers, Europe’s premier melodic rock label.  Taking a similar blueprint to that foisted upon Issa Oversveen and Angelica Rylin, Moonland enlists the talents of label regular Alessandro Del Vecchio and Screaming Shadows guitarist Francesco Marras.  Naturally, being hard rock with a female lead, those concerned will be keen for prospective listeners to believe the end result is worthy of standing on Heart or Robin Beck’s coattails, but sadly, it any hint of a suggestion just wouldn’t be true.  As with anything with Mr. Del Vecchio in the driving seat, things automatically take a more bombastic Euro approach than anything – so the results are not so much ‘Bad Animals’ era Heart (always the preferred), but rather more from the second or third division of leather trouserdom.  As any discerning AOR buff knows, the European sound is markedly different from its US equivalent…and Euro hard rock from the twenty-first century has even less in common with classic 80s AOR from the US.  In short, it takes more than a reasonable guitar riff and a female voice to become the natural successors to Heart and their ilk…

There are truckloads of rock fans in Germany and Sweden who love the kind of sound that fills most of this release – and will happy buy these albums forever more– but within a couple of minutes of listening  to the opening number ‘Heaven Is To Be Close To You’,  it’s obvious this is firmly lurking somewhere within rock’s third division.  However, that is the least its problems.  Who signed this off as a finished work?  Any half-decent songs (and there are a few scattered throughout) are spoilt by a ropey end mix.  Much like ‘Perfect World’ – the 2010 comeback album from AOR legends Strangeways (though not as bad, it would struggle to reach those murky depths) – most of the time, this album sounds much like attempting to listen to your car stereo on the way home from a live gig.  Everything is compressed and somewhat fudgy sounding. The drums should give off a hard backline, but instead, they have all the power of a man thumping away at some cardboard boxes; worse still the rhythm guitars sound like they’ve come from soundboard recording of a live show and the lead vocal has no real power.  The only thing cutting through this fairly disgusting audio swamp are the lead guitars.  A few listens show that this audio faux pas can be worked around (at least to a degree) by cranking the volume but in order to actually hear everything at a respectable level, the sound levels need to be cranked up a fairly long way.

Although AOR by numbers, second track ‘Open Your Heart’ is an improvement.  A smoother arrangement is bolstered by a couple of nice key-changes, but by the time the kicks in, the mix makes listening almost unbearable in the long term.  This should sound huge, like a celebration of melodic rock from years gone by, but instead it sounds like a band going through the motions. The drums are unremarkable, the guitars chug away in a manner that’s equally bland and while Ms. Kuurmaa delivers each line as best she can, it’s just not enough.  Looking at the big chorus in isolation, it certainly deserved better than this.   The upbeat ‘Poison Angel’ hides a half-decent hook and also boasts an impressive solo,  but at this point it’s clear even when given reasonable material any vocal range is average at best.  With the band hammering at somewhere nearer the fastest speed their chosen Euro-rock can muster, most of the good bits appear to be masked by the choice of mix yet again – at this point resembling a relentless fug…unless played at a level loud enough to be heard clearly from about three houses away.

Thankfully, ‘Cold As Ice’ isn’t a cover of the Foreigner classic – some things are best left alone.  This identically named number is a stomping rocker with a driving rhythm, a harmony drenched pre-chorus and inevitable bigger hook to follow.  As with ‘Open Your Heart’ There are some good key changes and a reasonable melody throughout, but you’ve heard it before, you’ve heard it better…and most importantly, you’ve heard it produced/mixed in a far more professional way.  This, perhaps more than most of the other numbers, exposes these potential audio problems: there are keyboards hiding somewhere beneath the blanket of smothering guitars, but for what it’s worth, they’re almost inaudible.  As before, Marras ensures his lead guitar break makes an impression: and it does – even if only for the fact it appears twice as loud as everything else.  The album’s big ballad ‘Live and Let Go’ begins in a tried and tested piano and voice manner, quickly exposing the weaknesses in the vocal – its main melodies recalling Dan Reed’s ‘Stronger Than Steel’ and a Richard Marx cast-off.   …And then, somewhat predictably at the two and a half minute mark, a (should be) rumble of drums brings the rest of the band to the fore.  The results are so by-numbers it’s painful – not even a guest spot from AOR legend Bruce Gaitsch plucking at some nylon strings can save this from mediocrity.

Easily the album’s best track, ‘When Love Is Gone’ kicks in with a chugging riff and a twin lead that’s pure 80s rock, before settling into to a strutting rhythm that almost sounds as if it’ll equal something from Robin Beck’s classic debut ‘Trouble or Nothin’.   Given the tune’s slightly less bombastic approach, it’s here Kuurmaa sounds at her most comfortable – she’s neither required to belt things at top volume or attempt any long, emotional notes and as such she sounds half-decent:  never remarkable by any stretch, but certainly well above competent.  With the aid of a great melody, this quickly blooms into a reasonable AOR tune, the like of which would have sounded great in the hands of Fiona or Beck some twenty five years earlier.  Nested at the end of the album ‘Another Day In Paradise’ is a full-scale rocker.  Following an intro constructed of mechanical drum loops, the band hammer through three minutes of melodic metal in an almost Malmsteen-y vein.  The drums sound respectable here (at last!), while Kuurmaa gives her all throughout.  Somewhere behind the crunchy guitars ( sounding a good step up from most of the guitar tracks elsewhere) is a wall of keyboards bashing out a busy pomp (sadly still too low in the mix).  Across the allotted five minutes, the band barely lets up before the fade.  It’s not an especially great song all things considered, but it at least shows the band have an energy that’s not always obvious on other numbers.

There is some reasonable material hidden among these twelve tunes, but this album certainly required a more experienced producer. If you’ve got half an interest in this release at all, it’s hugely likely you already own songs frighteningly similar to these…and delivered in a much better fashion.  Whether Frontiers’ more production-line output (recorded with variants of the house musicians) really works or not seems to be down to luck more than anything else.  In the case of Moonland, the sparks rarely ignite.  Pick up ‘Thrive’ by Angelica Rylin instead…or better still, stick with those 80s classics.