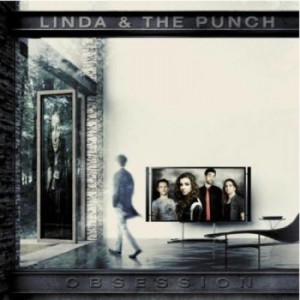 Any fleeting comparisons with P!nk (and any similar attitude-filled pop/rock) are present in the opening number, ‘What a Shame’, as Linda tackles a really upbeat and nervy rocker chock full of staccato notes.  As she wrings the best out of a repetitive hook, there are moments where you could just about believe this could be something from P!nk’s back-cat, or perhaps something nestled on a b-side from ‘Sk8ter Boi’ era Avril Lavigne.  It’s perhaps a tad closer to something from latter day Letters To Cleo (think Josie & The Pussycats soundtrack), which is no bad thing either. At the album’s tail end, ‘Love Kills Me’ throws drum loops against a sharp guitar line resulting a powerpop-ish affair that wouldn’t have been out of place on Bif Naked’s third release, ‘Purge’.   Chunky enough to please a core of rock fans while being simultaneously sugary enough to provide radio play from time to time, this is The Punch at their best.

‘Kill The Lights’ has a pleasingly choppy sound; a strong piece of pop rock that’s just quirky enough to catch the ear without stepping too far out of the average AOR buff’s tiny comfort zone.  It also features the album’s best guitar solo: Ralf Heyne hammers his fretboard with the confidence of a player that has ten times his experience, delivering a few bars of sweeping notes, a sound somewhere just between gritty and melodious, while the sounds of fake strings pumped from a keyboard beneath big up the band’s German origins.  From a melodic rock perspective, this track is a highlight and worth seeking out.  The last of the album’s four good songs, ‘Bite’ teases with a quasi-grunge riff over which a few drum loops hint at electronica.  This is the perfect backdrop for Linda’s best vocal performance: taking a tone that sounds like Gwen Stefani singing something from the symphonic metal genre, her voice sounds bigger here than on any of the other tunes – there’s a real sense of promise.

Sadly, the remaining tracks deliver nothing of any real excitement.  In fact, a good chunk of the material here is little more than melodic rock filler; ‘Cold Cold World’, in particular is by-numbers Euro AOR that could have found a place on many of the Escape Music label’s prior outings.  Yes, the guitar playing is of a reasonable standard and the general melodies and hooks are fine, but it’s just so, so…safe.   ‘Nothing of Anything’, meanwhile delivers an opening crunchy riff, before dropping back to allow Linda’s shined up voice to take centre stage – and it’s unremarkable to say the least.  The pre-chorus crosses AOR with a chunky Germanic take on what some like to refer to as “modern rock”, before sheepishly retreating to a tried and tested early 90s AOR blueprint for a chorus.  Since it has more of a 90s vibe than classic 80s sound, that alone may just be enough for a few listeners to think this is somehow radically different from the bulk of melodic rock discs, but the results are just so predictable.

By the time ‘Welcome To London’ rolls around, the band sound like they’re running out of steam altogether.  The main riff plods, while the slightly murky production makes it even more leaden than it ever needed be.  Over a steady beat, Linda stretches her already limited voice in an attempt to convey excitement but doesn’t really succeed.  A key change and a reasonably sized chorus lifts things considerably, provided that is, you make no attempt at listening to the barrage of clichéd lyrics.  Its main melody – in contrast with the verse – is one of the album’s more memorable, but that may have something to do with it sounding more than a bit like New Musik’s January 1980 hit ‘Living By Numbers’ than anything else. [Surely an unintentional move on the songwriters’ part, since few would likely use that as key inspiration].

Making even the dullest moments of this record seem okay by comparison, its one cover tune presents a colossal, gut-wrenchingly awful misfire for everyone involved.  Linda and her acolytes take the Patti Smith classic ‘Because The Night’ and seem to be under the misapprehension that making it heavy would somehow be beneficial.  Stripped of its distinctive piano tinkle – replaced by a workmanlike synth – and without Smith’s off-key yet memorable performance, it has much less charm.  Also, by cranking the main riff, the piece now seems incredibly laboured…and in remodelling a 70s classic in such a way they’ve just made the whole thing sound like a really bad impersonation of Within Temptation.  There really is nothing of worth here: dull riffs and synth noises that sound like low-budget sci-fi robots? Who decided on such a bad arrangement?  Naturally, this is best avoided by anybody who loves the original version. Actually, it’s best avoided by everybody.

The band and label can hope to step up to P!nk’s mantle all they like but, the fact is, whether tackling melodic but lightweight rock or quirky pop, P!nk’s better work often has a strong sense of attitude. …And it’s that key ingredient that’s desperately lacking from most of Linda’s performances.  Aside from a handful of reasonable tracks – especially that opening number and its half-promise that Escape Music may just have found an artist that breaks their usual mould – ‘Obsession’ does little more than shamelessly recycle various moments from the history of female-fronted rock. That’s something it does well on a couple of occasions but, for the most part, there’s rarely anything striking to be heard.