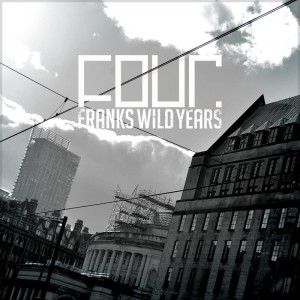 An atmospheric and unassuming start, in many ways ‘Rosie’ shows the band at their most mature.  Presenting little more than finger-picked acoustic guitar lines (played excellently by Chris Gaskell), the spaciousness of the piece allows the sound of buzzing strings and occasional fingers against frets to be heard.  An always welcome approach, those sounds give the performance an extra sense of intimacy.  The piece is gentle but fully formed, with the distinctive riff joined by soft drones in the bass department, a soft backing harmony and a great lead voice, with frontman Michael Barrow delivering each line like a man hurt, with a soft cry ever-present in his tones.  Overall, this is a really well-crafted opener – rootsy and warming, and yet with a sadness beneath; ghosts of the earliest Gomez lurk here fleetingly – though, naturally, without the deep whiskey-soaked voice.   There’s nothing else on the horizon in a similar style, but the following numbers are just as strong for different reasons.  Cranking the volume, on the surface, ‘Saudade’ could easily be the work of entirely different musicians.  A brooding instrumental, this druggy instrumental sounds like Josh Homme and Nick Oliveri experimenting with an emptier sound.  In the left channel, echoing lead guitar brings a stoner rock mood as it throws out the same simple riff repeatedly, while in the right, the bass and second guitar offer up distorted slabs of sound, blankets of distortion that fill space whilst gradually heightening the tension.  The drums link everything together, at first with a very flat sound, before building slowly towards a crashy climax.  If you’ve never connected with dark psych or the more marginal elements of stoner grooves, there’s nothing for you here, but in terms of slow-burning atmospheres, you’d be hard pressed anything better.

Following an intro making strong use of sliding acoustic notes and a descending scale, ‘Circles’ is a bluesy workout allowing both the voice and music to cut loose together.  Although there are electric riffs aplenty – in particular a banshee wail of a lead cutting through the number’s simplistic chorus – it is the rootsier elements lurking under the surface that provide this tune’s real meat.  The blending of acoustic and electric riffs works well for the band, while a slightly distorted voice gives everything just enough extra grit.  It’s a little old school; it’s a tad post-grunge in its execution and of course it’s familiar – but overall, this is the sound of a tight band giving everything they’ve got to make a tough musical standpoint, albeit without sacrificing any melodious elements.   Finishing the EP in overdriven rock mode, ‘Empty’ hammers home with a classic 70s rock riff, peppered with a touch of 90s fuzz, giving a stronger sense of the band’s live sound.  Behind the main riff, a distorted bass throws out shapes, before the whole band retreat for a quieter verse in a post-grunge style.  If you spent ‘Circles’ wondering if the band would cut loose, you get the rewards here as plenty of groove-laden leads pitched against a great rock vocal yields an excellent hard rock result.  It doesn’t push any musical boundaries or try too hard to be flashy – but to be fair, it isn’t because the band aren’t capable of such things, they just don’t have to take that route – like some of the tunes laid out by Seattle retro-groovers The Mothership, FWY’s riffs just speak for themselves with their unfussy attitude.

Although named after a Tom Waits work, no other connection with Pomona’s raspy-voiced storyteller should be sought when approaching Franks Wild Years, but what they give us encompasses a whole range of their talents. Retro rock, grungy cool, sultry acoustic pieces, cinematic instrumental: in just under twenty minutes, ‘Four’ pulls everything out of the hat in an attempt to grab your attention…and although the results are mixed, there’s something quite special here.