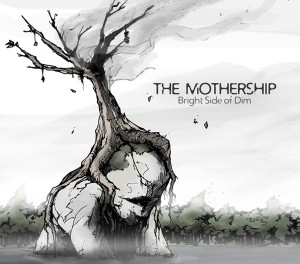 Released in 2014 – well over a year after initial rumblings of new material surfaced – ‘Bright Side of Dim’ shows a predicted development in the band’s sounds.  Whereas on the debut, the Soundgarden influences were sometimes very obvious, this second time around, any heaviness is embellished with an increased confidence in The Mothership’s own talents.  There are still obvious influences – this is a natural phenomenon for most bands, of course – but the band have learnt to use these in a much more interesting fashion.

For those who liked the more laid back tracks on the debut, this album brings a couple of real treats.  Dark acoustic sounds rest at the core of ‘My Twitching’, a surprisingly low-key affair considering it’s dropped in as early as the second track. With no obvious chorus, the circular finger picked notes are left to provide the entertainment and musical hook, played in a slightly sinister tune that suits John Beckman’s smoky vocal croons immensely.  Better still, ‘Tel Aviv’ takes slight stoner vibes and mixes staccato electric strings with a few drones and some nice bottom end, to deliver something very entertaining.  This track is the fruition of similar themes that crept in near the close of the previous album…only the result is much better than expected.

If you came looking for tunes with crunch, yes, you get plenty of those, too.  Something that’s quickly apparent is that Will Andrews (drums) and Ryan Thomas (bass) have the makings of a frighteningly good rhythm section.  During ‘Mr. Fister’ the drums hammer in 70s abandon against a riff that evokes Sabbath’s classic ‘Children of the Grave’ before mixing it up with a slight industrialist groove.  This results in a tune that’s hugely broad in appeal for any listeners who like their metal with an alternative leaning, as the band plough on with the sound of a truck.  ‘The Orb’ crashes with drum-line that sounds like a mutation of Nirvana’s ‘Scentless Apprentice’, complimented by an equally good bass riff. This groove-laden base is topped off with hard sheets of guitar filling everything out admirably.  The blend of groove and discordance brings out the best in the twin guitars, but like many of The Mothership’s heavier numbers, it is its hard backbeat that leaves the strongest lasting impression.

The award for “best riff” – without question – goes to the curiously titled ‘VID 00048’, as the whole band delve into stoner territory, pounding out a slow groove that would be an equal match for any of their 70s or 90s influences.  Crushing and brutal, this is counterbalanced by a multi-voiced, quasi-melodic vocal line creeping through from time to time; this combination of heady groove, brilliant heaviness and Alice In Chains-love is the pinnacle of everything the band aimed for on their debut outing…but this time out, they’re ready to take on the world with it!  Also very confident in its approach, ‘Special Release Japanese Bonus Track’ pulls together most of The Mothership’s best rock elements, diluting them with some fine off-kilter grungy harmonies, resulting in a slab of alt-rock that ticks all the right boxes.  Musically, it’s not always the most striking, but the vocals certainly make up for that throughout, as does an old-school guitar lead cutting through the sludge towards the number’s end.  Each of the elements come together in such a way that this tune could be best described as having a QOTSA-esque sense of grandeur.  Great stuff.

‘Opera Nomadic’ presents a bit of a curve ball in that between the sharp guitar lines, The Mothership tackle retro grooves of a different kind.  Whether intentional or not, this track has a late 60s mood that’s far closer to the 90s Britpop rivial than any pysch or stoner rock.  The mid-pace jangle settles somewhere near The Bluetones’ debut (cranked up a few notches), while the nasal vocal style rests somewhere between Oasis and Cast.  Meanwhile, a few interesting stops inevitably have a Beatle-esque edge, providing subtle embellishments between the whole band crashing through a great piece of fuzzy rock-pop.   Equally new to The Mothership’s palate of rock sounds, ‘Snot’ delves into the quirky and spasmodic world of math rock, delivering a world of angular grooves that are without doubt among this album’s very best.  The spiky yet spacious arrangement gives the vocals a freer rein; as a result, the featured voices are pushed between rock-based crooning and grungy screaming with abandon and ease (from all concerned performers).  Surprisingly, there’s also room for a few unexpected harmonies on the more raucous parts, and a clanky coda where the guitars play off the drum rhythms in a very pleasing fashion.  There are hints of the old Mothership, of course, but in terms of musical growth, this is spectacular…

Atmosphere, a few top hooks and some devastating riffage – ‘Bright Side of Dim’ has that all covered in style. ‘Ten Miles Wide’ showed promise, though very little of that release prepares the listener for this.  ‘Bright Side’ is not an improvement as much as as near-complete overhaul of The Mothership’s core sounds.  The results of their increased confidence and experimentations leave behind a devastatingly good alt-rock record…don’t miss it.