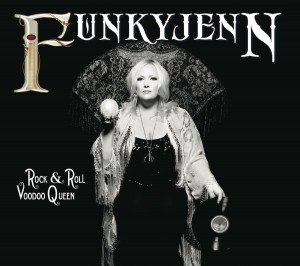 You know what they say – if you don’t want your music to date, make music with an old heart.  It’s a game plan that’s stood The Black Crowes in good stead for many a fine record; nor does it hurt so many blues-rock bands out there whose work draws its main thrust from The Stones and The Faces, circa 1971.  For blues and bar-room rock, that seems to be the point where everything stops…and miraculously rarely sounds dated and oft retains a vigour that sits at the heart of so much great good-time r ‘n’ r.  Jenn’s sound is made of such classic stuff: each of its elements instantly familiar, warming and welcoming – and ‘Rock ‘n’ Roll Voodoo Queen’ all the better for it.

The title cut tips the hat to The Stones’ ‘Gimme Shelter’ in that it carries a brassy vocal, while the core of the tune fuses Hammond Organ swirls with a boogie rock line that occasionally hints at Quo circa 1976, before veering off into bar-room territory.  Each of the well-worn influences stay fresh throughout since the band sounds wholly enthused when bashing out such a tune, while Jenn’s vocal – natural and confident, akin to Susan Tedeschi, though never quite as powerful  – carries itself very well.   If this sounds like it might lift your spirits and blow away a few cobwebs, the rest of the material – whether tapping into the raucous or soulful – will certainly be worthy of your attention.

Although not a cover of the well-worn John Lee Hooker classic, ‘Boom Boom’ comes with both an air of authority and a maturity that’s hard to beat.  The lead guitar delivers a dirty groove, the chugging chords in the left channel joined by a subtle muted wah-wah in the right, while the organ rises up to fill the space.  Jenn pushes her vocal range to the max, her blues-soaked cry recalling works by the similar revivalists The Mother Station.  Again, her voice isn’t always as powerful as some of her peers, but given the style, it is hard to argue against it being more than strong in its own way. Even if, maybe, the voice doesn’t reach Jenn’s own full potential, with a band this good in tow this should hit the button for fans of retro rock sounds.

With no messin’, ‘Shoulda Been My Lover’ combines a bar-room swagger with a little rock ‘n’ roll piano in a tribute to mid-70s Stones and The Faces (think of a female fronted equivalent of the Quireboys debut and that’ll paint a reasonable comparison).  Jenn sounds like she’s having a top time as she belts out each line, while her entire backing band give things their all – no less than such grubby grooves deserve.  For ‘Nashville, TN’ their typical swagger is tempered by a southern influence.  Jenn’s louder tendencies are an equal match for the band launching into some full on rawk that carries the torch from early Skynrd and classic Black Crowes.  With both these numbers, you’ll know the agenda straight from the get-go, but it’s expertly delivered…and they sound like killer live tunes.

Proving she’s just as adept at slower numbers, ‘Butterflies Bleed’ and ‘Outta Sight Outta Mind’ showcase Jenn’s soulier tendencies.  During ‘Butterflies’ her crying voice is ably backed with organ and strings on an arrangement that occasionally resembles the Brenda Holloway classic ‘Every Little Bit Hurts’, especially in its use of stops, where naturally, the lead vocal swells in volume filling the space admirably.  ‘Outta Sight’ builds slowly, with Jenn bolstered by harmonies over a measured drum part and strings – while not as effective as ‘Butterflies’, the performance is very passionate – and in terms of performance, passion should always be the most important factor.

While nothing here hits the dizzy heights of Sass Jordan’s 1993 epic ‘Rats’ in terms of grit (that is, indeed, a record that’s almost untouchable), Funkyjenn is a match for most small venue artists tackling the blues rock genre from the 90s and beyond.  Put in context of the wider picture, she has more flair than the tired Never the Bride and more truckload more spark than the Jimmy Page-championed band St. Jude [yawn!].  For those who dig a bit of blues rock that takes in a little funky soul en route – in the manner of the Tedeschi Trucks band on a smaller scale and budget – this is a release with a lot to give.