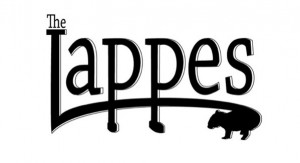 Formed at the beginning of 2013 New Jersey quartet The Lappes seemingly wasted no time in applying themselves to the creation of fine tunage. In under a year, they perfected their signature sound – a fine, fine blend of roots rock, folk and a touch of country – and entered the studio; the resulting debut EP, ‘Lappe It Up’, sounding like the work of seasoned pros.

‘Can’t Stay’ introduces the band brilliantly in a way which instantly makes the listener sit up and listen. The drums rattle with a huge presence, helped no end by the wisely chosen “live in the studio” vibe. When joined by the bass, things get even more exciting: the rhythm section of John Fraze and Shane Naidoo is an exciting one indeed – the pair of musicians seemingly possessing a huge amount of drive. Joining the almost garage-rock base, the use of acoustic guitar is interesting in that it is potentially at odds with the loud rhythm (and yet works exceptionally well), before the band pull together to create a very rhythmic slab of semi-acoustic rock. The vocals, meanwhile recall the quietest sounds of Seven Mary Three man Jason Ross (but, thankfully, always resist temptation to launch into any of his shoutier tendencies) – always sounding like the perfect foil for the musical backdrop. While the drums lend urgency to this opener, if anything, the second number ‘Through It All’ ups the ante. Here, as the band take their blend of roots rock and flesh it out noodling Grateful Dead-isms in the lead guitar department, as muted notes create a cheeky riff. Any influence from Jerry Garcia is always welcome (no matter how slight) and those understated guitar notes combined with a hushed vocal results in something very pleasing. A wise choice for second track, too, as this shows a different side to The Lappes.

With the arrival of ‘Summer Breeze’, there’s a touch of Dave Matthews at play with its fun funkiness on a jaunty ditty that’s here and gone inside of three minutes. Clearly the band are aiming for that “smile factor” on this track as they couple a more than reasonable hook with another lovely noodling guitar. In terms of something more commercial this is very much a winner, but in terms of music that stimulates the head, The Lappes’ have far better sounds to give their potential listeners. Continuing with the upbeat vibes, ‘Gotta Problem’ presents a perfect piece of acoustic pop-rock. The core funk-inflected bass work places The Lappes firmly in a musical framework that bares more than a passing resemblance to the mighty Blues Traveler (sans harmonica), along with touches of Cambridge cult heroes Ezio. The grooves are largely familiar in the way the finger-picked guitar jostles against a particularly upbeat vocal (though still delivered in hushed tones). What you’re possibly not expecting, however, is the presence of a steel drum during the track’s latter half. The strange thing is, although maybe a subtle lead guitar or harmonica might’ve sounded a little more traditional given the setting, the band balls it out…and it kind of works. If there’s a (slight) negative at all, it’s that any attempts at grabbing a chorus hook isn’t taken firmly with both hands but, that said, The Lappes seem more concerned with moods and grooves than any sing-along potential.

Wisely leaving their best for last, ‘Disinclined’ has a much darker tone, inviting more of those previous comparisons with Seven Mary Three via Will Miehe’s voice, adopting a slightly unsettling wobble. It’s with the instrumental sections the band’s intentions become crystal clear: the jazzy guitar tones of the first guitar solo and spacious arrangements are a dead ringer for Grateful Dead circa 1974 (albeit less drug-fuelled and with a greater focus on playing in tune). For the track’s climax, the jazzy tones shift into full-on blues rock mode as Tom Wilkinson launches into a fabulous bluesy guitar solo with plenty of fuzz, thus giving it an extra edge. As the track fades, you’ll wish this could’ve gone on for so much longer.

Since The Lappes’ handle poppier music just as well as Dead-infused sounds, in terms of whichever is their stronger suit will be purely down to personal taste of the listener. With the push and pull between the commercial and more jam-oriented, they’ve got a great base from which to work; one that will surely get better all the time the band are willing to push themselves. Although the overall sound at this early stage does not necessarily bring much that is either surprising or challenging for the roots-rock enthusiast, this EP is still a terrific debut, its warm sound and friendly demeanour providing a perfect soundtrack for those optimistic sunny days.