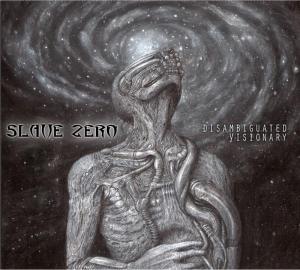 Let’s not pretend here: along with ‘Abandon All Life’ by Nails, this is undoubtedly one of 2013’s heaviest releases. But then, we had been warned: prior to Slave Zero dropping this fifth offering, vocalist Graham V. Flynn claimed ‘Disambiguated Victory’ to be “heavy, unrelenting and unpredictable”.  It is certainly all of those things.   It’s also a brief lesson in how to make an intensely technical death metal record – one which branches out a little further with each passing track – but naturally, it won’t be to everyone’s tastes.

After an intro of electronic drones sounding like a sample from a sci-fi movie, Slave Zero barely allow their listeners any time to rest during the minutes that follow. ‘Mathmatically Legitimate Solution’ tears straight out of the box with a full compliment of bass drums (played by a man who sounds as if he has a third leg) and intensive grindcore riffing.  It’s the kind of thing that makes post-Lee Dorrian Napalm Death sound just “a bit heavy”.  Eddie O’Malley’s guitar work lodges behind the barrage of drums, shifting between thrash metal sounds and grindcore elements with ease, though the high point comes from a brief instrumental break. Here, once the drums let up, comes a fantastic progressive metal interlude, proving that – if you can get past Flynn’s vocals (alternating between death metal grunts and almost impenetrable screams throughout) – there’s a fair amount of complexity beneath this wall of sound.  Taking a more straight ahead approach, on the surface, ‘Limitless Peripheral Perspective’ offers more of the same. Constructed around a killer riff which thrashes with intent throughout, drummer Ben Wanders taps into something more interesting than before.  Between bursts of pneumatic brilliance, the stops have a strong presence, while occasional (relative) slowing down of the main rhythm here and there allows O’Malley room to throw a few more traditional metal elements into his lead guitar work.

During the similarly killer ‘Embroidered Strategy of Calculated Misrepresent’, the riffs end up somewhere between a relentless approximation of groove metal colliding full on with progressive death metal.  Imagine elements of the earliest Opeth releases mixed with the absolute extremities of Phil Anselmo’s ‘Walk Through Exits Only’and you’re somewhere toward Slave Zero’s key sounds.  As with the EP’s opener, the band wisely break up the skull-pounding with a burst of melody – in this case a brief solo that sounds like something from an album by Camel, played either on an ugly keyboard or guitar subjected to electronic treatments…it’s hard to tell which. Either way, it’s great.

Following an uncompromising intro, ‘Oscillating Perceptions of an Abstract Exixtence’ brings back the dual vocal of the opening number (equal parts growl/screech), but aside from these death metal tendencies, musically, the changes in time sig and general tightness all round owe more to progressive and tech-metal than before.  Tacking the arrangement furiously, the band are obviously as tight as can be; the technicalities of their chosen subgenre never allowing for anything less.  Of particular note, once again, is a classic sounding guitar riff, creeping in briefly against thrashing drums – creating a sound somewhere between Meshuggah and early Entombed.  On the EP’s most accessible tune, Anthropic Landscape Theory’, O’Malley’s riffs incorporate strong elements of classic thrash along with very technical death metal tones, his tone sounding crisper here than on any of the EPs other cuts, even behind Flynn’s throaty roar.   During the track’s second half, the presence of what sounds like a fretless bass solo lightens things up considerably, while a very old-fashioned lead guitar break also gives a heightened feeling of melody.  Although still at the more extreme end of metal, this tune is nowhere near as claustrophobic.  While still heavier than a very heavy thing [(c) Devin Townsend], this has all the hallmarks of a progressive death metal classic.

There’s no mistaking that Slave Zero have a huge talent, even with the slightly muddier tendencies of their production budget it is more than possible to tap into lots of complex layers within their crushing wall of progressive grindcore.  ‘Disambiguated Visionary’ is unlikely to branch them out beyond a cult audience, but devotees of extreme metal lodging somewhere near the grindcore end of the musical spectrum should find plenty to enjoy here within  twenty-five absolutely brutal minutes.