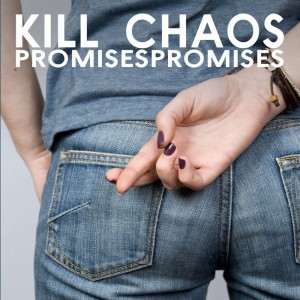 Nottingham’s Kill Chaos have been working hard at making a name for themselves, creating a mini-buzz in the north of England.  They’ve toured in support of INME, Frank Turner, Arctic Monkeys and the seemingly famous-for-five-minutes Reef and their 2013 full length ‘PromisesPromises’ [released via Field Records, home to the excellent Maybeshewill] is a reflection of the band’s live sound, in that it isn’t too polished.  Its fantastically bass heavy in places, while the main riffs often carry just the right balance between melody and distortion.

‘The Boy Done Good’ kicks things off with a strong demonstration of most of KC’s key sounds.  Gavin Trelivings rattling and distorted bass provides the main basis for a few minutes of angular anger, over which Darren Clewes’ sharp guitar lines chop against the rhythm section effectively.  There are strong influences here from the late 80s post-hardcore scene – much like Therapy?’s 2012 return to form ‘A Brief Crack of Light’, the influences from Fugazi here are unavoidable – before the trio of musicians fall together for a more radio friendly chorus.  As a simple refrain of the title sits alongside a rather meaty riff, everything comes together excellently, providing something that should be of great appeal to many alt-rock fans.

Bringing the band’s more tuneful elements to the fore, ‘Falling Down’ sounds as if it would make an excellent single. With a smidgeon of ‘Colour and The Shape’ era Foo Fighters here and there and the meatiness of the heaviest parts of Biffy Clyro, it’s another great tune that showcases this band as not only strong players, but potentially great songwriters and arrangers – and unlike ‘The Boy Done Good’, there’s even enough room here for a few unexpected harmonies.  Those looking for something sharp should look no farther than ‘OK On The OK’, a track heavily reliant on clanging rhythm guitars and shouty vocals, delivered with a rather aggressive English accent – the combination of which recalls work by some other creators of northern noise, Codex Leicester.  There’s not so much of an obvious chorus here, but the sheer energy of this number is enough to carry things off well.

Beyond that, nothing sticks out instantly, but repeated spins uncover a selection of expertly played alternative rock tunes.  ‘Got a New Drug’ attacks with a ferocious chug and a similarly hard drumming style, while ‘Politics’ is a fuzzed up joyous shout-along with a lot of potential for the live set.  Again, the best moments come from a hugely amplified bass and the three musicians attack with a real intent.  The metallic elements of these numbers show a meatier side to the band’s riffs – and – again – in the live setting, they’ll certainly sound much better than they do here.  The huge rock sound of ‘Company of One’ shows off the band’s simpler side ever more clearly, as they place a selection of crashy alt-rock riffs against a surprisingly melodic and potentially catchy chorus hook.

Despite Kill Chaos’ best attempts at creating angular noises to make their tunes a little less formulaic, the angular parts end up sounding predictable in their own way. ‘PromisesPromises’ is a solid album – often brilliantly played – but the songs are not always as compelling as the first few numbers suggest; it might have had a far bigger impact released as a couple of EPs instead of a full length disc.   That shouldn’t deter lots of alt-rock fans from checking the album out, of course – after all, portable music devices have made it so easy for listeners to cherry-pick their favourite tracks as opposed to digesting whole albums in one sitting …and, while never perfect, ‘PromisesPromises’ is a release with some rich pickings.