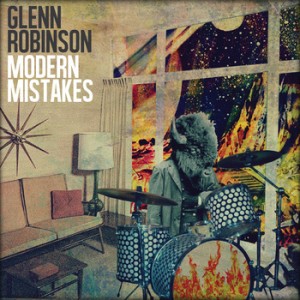 So, what of the songs?  There are some absolute belters to be found on this record.  For straight up punk thrills and uncompromising attitude, ‘Outta My Head’ is the strongest cut, its staccato riffs and distorted vocals bringing attitude and spikiness aplenty.  In a couple of minutes, the rhythm section powers everything so well, with a great, fat rock ‘n’ roll bassline in particular, fighting its way through the punked up chaos.  On the similarly raucous ‘Fire In The Hole!’ – a tune boasting another keen bassline and simple gang vocals, the cobwebs get truly blown away, but this album has far more thoughtful material to offer than mere punky workouts.

Fans of Kurt Baker’s ‘Brand New Beat’ will find an instant favourite in ‘I Really Shouldn’t Bother’, a new wave inspired punker, driven by a hugely melodic chord pattern and infectious chorus.  It’s predictable sound plays straight for the hearts of punk-pop fans rather than having any pretence of attracting fans from other rock sub-genres, but all the same, that’s what makes it so good…and in that chorus Robinson knows this album already has a tune that’s guaranteed to attract anyone keen to keep an open ear. ‘The Worst’ is a brilliant track which like ‘Shouldn’t Bother’ appeared on Robinson’s earlier EP ‘Total Fiasco’,  but is totally worthy of an album spot. Garage roots collide with a punk ‘n’ roll ethic, working a riff that The Hives would be very proud of indeed.  That riff alone is tough enough to carry the whole piece with its thrashiness and  excellent “up-and-down” motif to keep it interesting, but with a big chorus thrown in too, it becomes one of the album’s instant stand-outs. Robinson’s voice is firmly at the melodic end of punk-pop/new wave throughout, but even with the echoes and filters adding extra style points, he never loses any edge.

‘Wavelengths’ has the hooky qualities of a few of the other tracks but adds a new slant, slowing the verses down a touch, more in keeping with the louder end of power pop, especially with its full quota of guitar jangle.  Staccato riffs collide with a pounding drum during the quietest moments, which perhaps more than anywhere else on ‘Modern Mistakes’ shows Glenn’s percussive interests, bringing the drums to the fore more than you’d normally expect from this kind of tune.  While not providing so much (relative) complexity ‘Gimme Insanity’ has another cracking hook – the inanity of repeating the one line with a flippant “oh yeah” is the kind of thing that would make Joey and Johnny proud – while the crashy music is punk-pop gold.  Like ‘The Worst’, Robinson shifts between clean (multi-tracked) vocals and effects that, but his sense of edgy vocal melody and another top tune leads the way for another three minute belter. Like ‘Wavelength’ though, during this number, Robinson makes his presence felt from behind the kit, constructing those verses from the snare drum up.

Despite being “recorded sporadically” over several months between December 2012 and the summer of 2013, this record is very consistent indeed, just as if it’d come together in a couple of sessions rather than in bits and pieces.  With its combination of powerful punky riffs and new wave pop sensibilities – all dressed up with a trashy rock aesthetic and instant familiarity – there’s just so much to love about ‘Modern Mistakes’.  Love Marky Ramone & The Intruders, Kurt Baker, or maybe even the noisier elements of The Genuine Fakes?  Prepare to add Glenn Robinson to your ever-growing list of heroes…