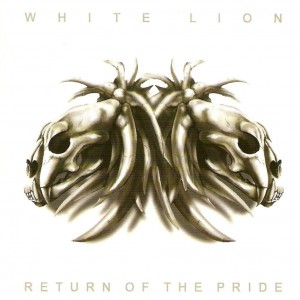 This comeback album ‘Return of the Pride’ is a White Lion album in name only.  The line-up features only Tramp from previous incarnations of the band, so it’s not really a return at all.  What is absolutely certain is that without Tramp’s old running-mate Vito Bratta on guitar and co-writing duties, it’s almost a waste of time. Without Bratta, White Lion equals Mike Tramp plus pick-up band looking to rake in few bucks on an old rock ‘n’ roll dream, under a name resurrected at record company behest.  Maybe this could be forgiven if the material was of a good standard, but most of ‘Return…’ is so flat it’s almost instantly forgettable.

The album begins with some gothic style chanting and an effort to create a dark and brooding atmosphere.  What else could you expected from a song called ‘Sange De Cristo’?  It’s a bold statement to begin an album with a nine minute epic, but unfortunately, there are no real hooks to catch the listener’s attention.  ‘Dream’ is better as it has a more AOR purist approach: mid paced, big chorus, multi-tracked guitars.  However, it’s here, one of the album’s biggest problems becomes frighteningly evident – what’s happened to Tramp’s voice?  It’s slightly lower than it used to be, and while he was never up there with Lou Gramm or Steve Perry in the great singer stakes, his voice used to be much better than this. In fact, it’s pretty terrible on most of this release.

‘Live Your Life’ is punchy and harks back to the sort of thing that the late 80s/early 90s White Lion were best at; reasonable riffs are on hand for a half-decent attempt at a rocker, however, the enthusiastic “anything you want, anything you need, you got it” message grates a little in the 21st Century.  Still, if everyone sticks their head in the sand and pretends it’s 1989 (a regular hobby for most aging AOR fans), it’ll be fine.  Going by the intro, ‘Set Me Free’ sounds at first as if it’s going to a trademark White Lion ballad, but then the guitars kick in.  It’s a mid-paced riffer, let down somewhat by huge clichéd lyrics like “set me free / I don’t need your chains to bind me”.  It’s hard to listen to and what’s more, it throws any theories regarding “old AOR bands still having the ability to make decent albums” out of the window – and by this point, this album isn’t far from being tossed out the window either).  Would this all be different if Mike still had Vito to help with the song writing?  Maybe it would, maybe it wouldn’t…but the guitar-work certainly would have had a kick up the arse, even if the lyrics still sounded like they’d been tossed off in under half an hour. ‘Let Me Be Me’ features a couple of strong musical moments but is let down by an indifferent chorus. Although well-meaning, it isn’t strong enough to wedge itself inside your head on its own. It’s also been puffed up with some average sounding backing vocals in a misguided attempt to create an impression.  Given the state of the vocals, it was probably a mistake.

‘I Will’ sounds like it might be good at the outset, as occasionally, sounds of Tramp’s former self creeps into the vocal, but it’s best not to get too excited – the lyrics are frankly appalling, cringe-worthy and best forgotten.  Moving on, you know with a song called ‘Battle At Little Big Horn’ its not going to an easy ride, so at least you should hope for a bombastic tune strong enough to carry the inevitable weight.  No such luck -it’s another distinctly wobbly affair, begins with a lot of “whoah-whoahs”, leading to obvious listener woes before descending into a seven minute plod-fest.  Clichés abound about being ‘a great day to die’ possibly could be over-looked in favour of the twin guitar harmonies and a decent solo, but by then, in all honesty, it’s all too late.  This album is beyond saving.

What happened here?  What Lion could be great before, but this is really, really bad.  At its strongest you could say it was unremarkable.  Still, if you’re one of the AOR diehards, you’re already convinced this review is packed out with lies or the reviewer has had a lapse of taste and you probably stopped reading by paragraph three.  Never mind.   If you think this is great, you probably only ever listen to AOR/melodic rock and you’re probably also convinced that had Kurt Cobain never been born, Survivor and Def Leppard would still be churning out number one hits.