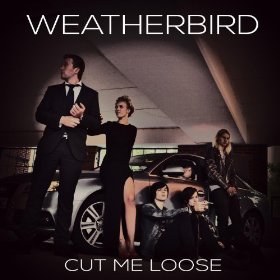 Just teenagers at the time of this debut release, Weatherbird have already gathered praise from UK DJ Gary Crowley and legendary musician/journalist John Robb.  After a couple of listens to their ‘Cut Me Loose’ four track EP it’s not so difficult to see why.  Their style isn’t always especially original, but between the four members, Weatherbird comprises strong musicians and – perhaps more importantly – at least one member who knows how to knock out a really strong chorus.

The band does not show all of their cards straight off, however. ‘There We Weren’t’ is fairly run of the mill alternative rock.  A rumble of thunder, a small burst of feedback and a decent opening riff promise good things, but the overall sound is a tad muddy.  The best musical elements are provided by Josh Taylor’s bass and an intermittently interesting lead guitar from Dom Farley, but there’s a nagging sense that the band are capable of more.  Possibly, even, much more.   That feeling is confirmed about a minute or so into ‘Johnny Strange’, which pulls together those prior alt-rock elements with a greater sense of pop.  Its chorus is simple – simple enough to stick in your head without sounding empty or too repetitive – while the vocals are far better than before.  Jacob Ball shows he has a natural voice that carries a rugged melody with a reasonable presence, while the well-placed counter vocals add a great deal to the overall arrangement, whether tackling harmonies or some surprisingly light oohs.  There’s a wide range of guitar sounds scattered throughout, too – from the ‘Document’-era R.E.M. sound of the intro through to a fuzzed out lead break to finish.

Things step back slightly for the carefree alt-rocker ‘House of Commoners’, but the strutting arrogance of the main verse and a sharp production sound (courtesy of sometime Funeral For a Friend and Motorhead producer Romesh Dodangoda) is just enough to forgive a surprisingly forgettable one-line chorus.  Very much a case of a great tune with not so much to back it up…but that, too, is soon swept aside by the grandeur of the band’s closing statement – a track that’s worth seeking this EP out for alone. ‘Chasing Dragons’ kicks off with another strong bassline, which is at first joined by an alt-rock guitar, all sounding fine enough, but it’s at the end of the first verse where the magic really happens.  While the basic rhythms are akin to many twenty first century alt-rockers, the clean toned guitar work conjures memories of an alt-rock/slightly gothy past, with hints of The Mission and all too often overlooked Aussies The Church providing reasonable reference points.  This is in contrast to the climax in the track’s second half where drummer Reuben Gwilliam leads the band into a burst of noisier alt-rock trashiness.   The song is Weatherbird’s best: it has a lot to do with that brilliant tinkly guitar part, but it’s not down to that alone; everything just feels more in place, somehow – more mature, even.

While you’ll not find anything too groundbreaking here – after all, most straight-up alternative rock avenues have been explored time and again – it’s hard to deny that Weatherbird’s beginnings don’t come with some very strong foundations.  This EP presents a talented band – but they’re still a band with room for musical growth.  Based on the brilliant ‘Chasing Dragons’ and ‘Johnny Strange’, though, this bird is definitely on the way to bigger and better things.