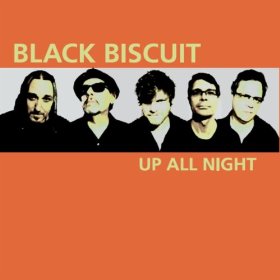 Three years on from ‘Blueline’, BB’s sophomore disc ‘Up All Night’ is a surprising improvement. It’s surprising in that they actually recorded a second record (more surprising still that they didn’t incur the wrath of the Fab Four’s legal folk), but here it is.  Improvements are always relative, of course, and for those unfamiliar with ‘Blueline’, this release is still going to sound like a band jamming in their garage…and quickly passed over.  For those listeners who actually heard ‘Blueline’, though, ‘Up All Night’ should sound familiar in a couple of places, while more than hinting at a greater focus in others.   Yes, the sound still rough (clearly the band are working with a tiny budget) but any previous attempts at keeping the mood light with novel and quirky material are long gone.  In their place, Black Biscuit have remodelled themselves as a muddy blues/R ‘n’ B outfit – an obvious change from times gone by, but a change for the better.

Kicking off with the trebly ‘Chains’, a thin guitar sound leads the band into a jaunty tune with wobbly harmonies and a biscuit tin drum.  Not the strongest of starts, but a occasional guitar lead lifts the general output from potentially…average.  Moving swiftly on, from then on, the album picks up. The upbeat ‘Buick’ puts the band in a simple R&B frame, its multiple vocals, hard backbeat and harmonica clearly influenced by the early J. Geils Band records.  While a low budget audio experience, it’s clear the band are having a great time throughout, jamming on its familiar rock ‘n’ roll structure.  So much fun, in fact, that at the point it feels like it has reached a natural end, Wes Michel and Shane Pirone step up and duel on an extra guitar break. If you like familiarity and don’t mind a raw recording that captures the mood of the piece rather than being a mind-blowing sonic adventure, there’s a lot to enjoy here.  Similarly enjoyable, ‘No One Goes’ taps into a traditional electric blues in a Buddy Guy vein.  There’s a little of the old Black Biscuit humour creeping in lyrically – this blues concerns a live show where the audience aren’t interested in the band on stage, being either asleep or walking out of the venue in despair.  The lyrics are very much secondary to the music, however, which shows that the band do have often untapped promise.  The lead guitar work hits the mark throughout, while underneath a solid bass line adds a warmth missing on a few of the other tracks. You’ll all have heard this kind of blues a thousand times…but there’s always room for a bit more.

The swing-edged ‘Man Upstairs’ is a touch unnerving at first. A tune that sounds like a Brian Setzer cast-off, there’s absolutely nothing wrong with its slightly sleazy ‘Stray Cat Strut’ inspirations – and indeed, it’s well played; especially the clean lead guitar break – but the Johnny Maxwell’s croony vocal doesn’t always work.  It’s a number that actually improves with each listen, but the deliberately striking choice of voice isn’t always gonna fit the listening mood.  Like ‘Chains’, ‘Work So Hard’ aims for a reasonable groove and while the band sound okay, there’s still a very iffy vocal to contend with.  At the tail end, there’s a general improvement with the arrival of a lead guitar break…and just as it seems as it’s about to get interesting, the track fades leaving the listener wondering what might have been.  Up there with ‘No One Goes’ – and claiming its obvious position as this album’s best track – is the genuinely brilliant ‘Hobojoe’, a creeping blues full of ringing lead guitar. Its gravelly southern tone owes a small debt to early, early ZZ Top, while its whiskey soaked vocal sits well between a few fierce lead guitar breaks.  Is this really the band who felt the likes of ‘Robbie The Robot’ and ‘Surfin’ In Afghanistan’ were release-worthy a few years ago. ‘Hobojoe’ is genuinely excellent – more please!

The album’s couple of real missteps luckily appear towards the end of the record.  ‘Santa Fe Rose’ could have been a reasonable fuzzy rock affair – complete with NY/Crazy Horse lead work providing the tune’s only real high point – but, as with a few other tracks, an incredibly flat vocal kills most of the good moments.  The upbeat ‘Don’t Let Me Stop You’ is a number that perhaps most closely resembles the first Black Biscuit record.  It’s a slightly embarrassing garage-sounding recording, with the five musicians tackling something with a slightly naive, early sixties rock ‘n’ roll heart.  There’s a frivolous, almost catchy ditty fighting to be heard, but a particularly rough lead voice and some half-hearted harmonies make this sound like a working demo that the band intend to record properly sometime.

There are at least four or five enjoyable tunes here, even if they’re stifled by budgetary constraints and Black Biscuit’s penchant for the ragged.   ‘Hobojoe’ proves they really can wheel out the big guns when they want to, but there’s still some way to go before they can take on The Great Affairs in a head-to-head battle to win the affections of the DIY roots rock/bar rock fan.  A hit ‘n’ miss record for sure, but in the Black Biscuit stakes, this is a huge step up from ‘Blueline’.