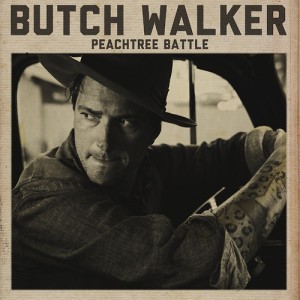 Over two years later, in the fall of 2013, its follow-up – the ‘Peachtree Battle’ EP – continues to dip into Walker’s varied talents. It’s another musical menagerie where he’s ensured that, again, variety is the key and each of the tunes offers something different from the preceding one.

The title cut sets out softly, with Walker finger-picking an acoustic guitar, its sound particularly effective against a solo bass drum beat. Accompaniment from a bass and an occasional steel guitar sound brings out the best in his slightly melancholy voice for the most part.  Bringing the tune to a close, a choir of whoas provide something of an understated climax to a somewhat understated performance.  Following a brief intro, ‘I’ve Been Waiting For This’ crashes in with a world of similar whoas against a huge drum [impossible not to think of pop band fun. with regard to its general mood] before a hard rhythmic electric guitar part is called upon to add extra crunch.  Between the whoas and the clever juxtaposition of electric rock instrumentation, folky plunking and a couple more crying leads, this is a hugely enjoyable tune…possibly outdoing most of the more raucous ‘Spade’.

‘Let It Go Where Its Supposed To Be’ is another particularly stompy offering.  It features a great arrangement on the verses with another of Walker’s strong vocals, though the rousing backporch stomp of the chorus – somewhere between a rough and ready hoedown and the supremely nasty Mumford & Sons [sans banjo, thankfully] – won’t be to everyone’s tastes.  …Though surely by this point you’ll have long realised that the very idea of creating something “to everyone’s tastes” is never Walker’s primary interest; he’s more concerned with showing the world how he is capable of penning material in a variety of styles and won’t be pigeonholed…and when he’s this stylistically flexible, why not, indeed?  ‘Coming Home’ is easily the weakest of this EP’s five numbers – while the tune sports a brilliant drum sound and a cheeky guitar solo, there’s not much else to get excited about.  This once reasonable popish tune is made a teeny bit irksome by the fuzzed out vocal treatments and the kind of whoah overuse befitting of Thirty Seconds To Mars, but those who enjoy alternative indie-pop will still likely find something to enjoy.

Best of all is the slightly disjointed, clanky pop of ‘Favorite Son’.  Atop a mechanical beat, a sharp guitar occasionally hints at new wave brilliance, while elsewhere Walker employs a warming and bendy bassline – the latter solely responsible for linking this tunes many facets. Adopting a quirky vocal similar to that of Brendan Benson, Walker turns in this releases best performance, a performance which is improved no end by his delivery of a very infectious hook.  This is why you love Butch Walker…and if you don’t, it’s why you should.  He’s come so far since those love them/hate them releases with Marvelous 3.

It may be short, but for Butch’s small army of followers this EP represents a welcome addition to his catalogue.  Not all of the material is a sure-fire hit, but ‘I’ve Been Waiting For This’ and ‘Favorite Son’ (the latter, especially) are so stupidly infectious, they ensure ‘Peachtree Battle’ is a must-have disc.