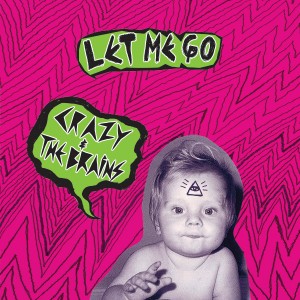 This debut full-length is rough and ready, fun, a little inconsistent and rather trashy…but most importantly, it’s distinctive.  Like Violent Femmes charged up on the Ramones’ back-cat, Crazy’s brand of anti-folk has more of a punky style than most other bands trading under anti-folk and lo-fi banners, but as before, their real charm comes from Jeffrey Rubin’s clanking xylophones: their strong presence in the left channel gives most of the material a really carefree edge.

With regard to the re-cycled material, in most cases it is easy to see why the band would want these tunes to have pride of place on their first full-length release. ‘Lindsay Lohan’, in particular, shows C&tB off to be a talented bunch within their slightly sloppy musical remit.  A strong bassline provides an equally strong base from which the band builds a brilliantly punky tune, complete with catchy chorus (name-checking ‘SNL’s Opera Man) and tinkling percussion a plenty.  Here, any claims that Crazy & The Brains are a party band are truly valid.  With the upbeat tune rattling along apace, Christopher Urban’s nasal tones are perfect for the slightly bratty subject matter.  Likewise, with ‘NYC’ and ‘It’s Alright’, the solid mix of pseudo-busking, percussion plinking and punk pounding shows the band to be in a niche almost of their own.  Why ‘Snacks’ made the cut is somewhat of a mystery; sitting halfway through side two of the LP, a slow and sagging arrangement provides the core of a particularly unmemorable ditty, not helped by a bad vocal. Crazy & The Brains can be sloppy at times, but even so, they’re capable of far better than this.

Looking at a few of the previously unheard numbers, there are some gems here.  With ‘King Kong’ there’s no messing as the band power through a couple of minutes worth of fuzzy punked up chords, topped with hard hitting percussion work and a busy bassline.  The nasal vocal hints at fun, but looking beyond the nineties style slacker-isms, there’s the sound of an energetic band at play with the aforementioned bassline all important to making this work…and despite being a mish-mash of influences, it really does work. ‘Mexico’ slows the pace but is appealing in an anti-folk style.  C&tB tap into their quieter side with ease, mixing up ukulele sounds with an appropriated Phil Spector influence in the percussion department, but also up the ante by roping in ex-Moldy Peaches man Adam Green for a guest vocal.  As expected, Green’s deep drawling voice is well suited to this rather moody number.

Elsewhere, the band explores the world of ‘Sexy Magazines’ via a snotty punk pop workout, allowing the xylophone to tread the fine line between rock ‘n’ roll percussion and fills which could suit a carnival marching band, while Lawrence Miller lays down one of his most aggressive and assured drum lines.  The busy quality of the music would easily make this a standout, but the sneering vocal – sounding a lot like the teenage Jeffrey McDonald on Redd Kross’ ‘Born Innocent’ – makes it an absolute must.  A spiky arrangement and uncharacteristically fast vocal also makes ‘Biggest In The World’ stick out. Its punky attack rivals ‘NYC’ for the best – and most accessible – example of what makes this band intermittently appealing, especially when simple logic occasionally suggests this mixture of genre-bending and penchant for slack vocals shouldn’t be…

‘Let Me Go’ isn’t perfect, but then at a sprawling sixteen numbers and with the band seemingly tackling any subject matter or pace which takes their fancy, the first Crazy and the Brains full-length was always likely to be a bit of a mixed bag.  Removing ‘Snacks’ and throwing in a fun cover would have probably improved things dramatically, but as it is, those willing to keep an open mind and looking for a fun listen will certainly find some great tracks scattered here.