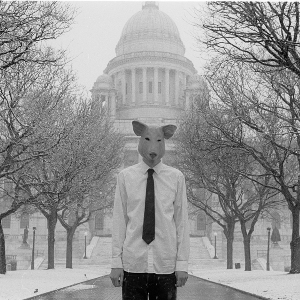 inertia. released their debut EP ‘Peace.Awareness.Action.’ as a free download via Bandcamp in 2011. Largely concerned with cranking out tunes as fast as possible while screaming socially and politically aware messages, inertia.’s garage based recording techniques lent a real sense of urgency to the material. On the one occasion they slowed down, the results were no less intense; in fact, like you’d expect from a raw DIY outfit tackling the kind of pace akin to side two of Black Flag’s ‘My War’, the slowing of pace lent the number a different sense of overall threat.

Two years on, the duo’s second release ‘New Lows To Bear Upon a Barren Heart’ (released via independent cassette specialists Baldy Longhair Records) shows a definite step forward.  The tunes are still almost as raw as humanly possible without sounding as if they were recorded on Robert Pollard’s beloved boombox, but both Ryan Treppedi and Stephen Dzikowski appear more confident in the confines of their two man set up, with a stronger vision driving them ever forward.

‘Before It All Went Black’ is inertia.’s most assured and accessible offering this second time out.  Following a brief intro of plinking clean toned guitars, the duo launch headlong into a slow and grinding riff, over which the vocals scratch and yelp with a message which sounds terribly important, although without a lyric sheet it’s so hard to tell.  In just three and a half minutes, this duo of impassioned noisemakers pack a great deal in; the guitars are cranked to the max, while the drums – although maintaining a garage ethic – seem to have a tougher sound.  Similarly slow and angry, ‘Harvest’ finds inertia. churning out a grinding, ever threatening riff against a clashing drum.  The intro’s contrast between heavy distortion and slightly atonal, cleaner guitar is impressive sounds, as is the classic sounding hardcore punk bass rattle (akin to the early Sick of It All) which swiftly follows.  As the duo launch into the meat of the number, throaty vocals scream out a message challenging a challenging an “vacuous society, callous and depraved”.  These sounds from the garage may sound more focused than on the debut, but the performance is still raw, the anger unfettered.

The EP’s other three numbers have a strong energy, but like before, less care in their arrangements.  In ‘Illiteracy, Dyscalculia’ the listener is pummelled with approximately forty seconds of hardcore shouting, while ‘It’s Not A Disease, It’s a Life’ is standard hardcore thrashing, albeit delivered with a powerful dual vocal.  ‘Homelessness’ pulls together the full range of inertia.’s angry arsenal, but in terms of end result, isn’t as hard hitting as neither ‘Harvest’ or ‘Black’, with a strong leaning towards slow grinding…which would work far better if the lyric happened to be more audible.  None of these tunes are particularly bad, but in hardcore/crust-punk terms, you’ll have heard better.

There are some good moments here on inertia.’s second release – a strong sense of promise even during the weaker tracks makes it good enough for hardcore punk fans to give the EP a listen.  Overall, although these tunes aren’t quite strong enough to snatch the crust-punk/powerviolence crown from the (sadly missed) F-Minus, inertia. prove you don’t necessarily need a full band to create a very full sound.