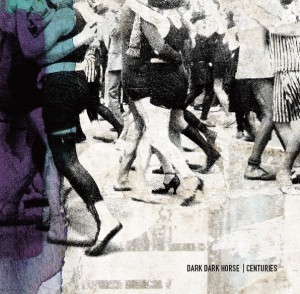 While the bulk of the work released by Leicester post-rockers Maybeshewill is concerned with winding atmospheres around hard edged guitar riffs, this project from Jamie Ward creates an almost entirely different mood.  Over the course of eleven tracks, Dark Dark Horse’s debut release ‘Centuries’ weaves electronic ambiance, pulling together the best moments from the likes of Zero 7 with the quiet menace of parts of Radiohead’s ‘King of Limbs’ and almost Thomas Newman like piano work to create a record which you’ll either love or hate.

‘Sharks’ – the band’s most accessible and direct number – builds a near indie-pop number from the basis of a Chemical Brothers inspired backwards drone, New Order-eque beats and a bottom end which occasionally sounds as if it’ll lapse into something jazzy.  Stafford, meanwhile, pulls us through the darkness of the tune – never quite as threatening as Massive Attack’s ‘Mezzanine’, though far creepier than most of Dark Horse’s arrangements – as his voice curls around an incredibly melodic hook.  By the end of this number, there’s a strong feeling that you’ve stumbled upon something very special.  A similarly accessible offering, ‘The Sound of Muscles That Have Frozen Closed’ presents a droning, ambling pop sound, evoking the new wave of the early 80s while simultaneously dropping in a little dream pop vogue of more recent years, while vocalist Jamie Stafford’s slightly northern tones bring a slight influence from Doves (a band that, too, came from electronic beginnings).  This, as with most of the other numbers, sounds as if it were tailor made for listening away from home, ideally in a crowded place, allowing the weary voice to wash over you as others dash.

The ambient mood of the title track is the perfect backdrop Stafford, as his tired voice gently cries through each line like a man who is truly word weary and questioning of everything he’s ever witnessed.  Slowly his world unfolds, with soft pulsing beats meshing with bass piano chords to provide a musical spine, as tinkling lighter notes dance across the piece.  While the music at first has a tendency to mask the lyric – particularly with the increased use of drum loops – it’s main hook eventually pushes through the busy atmosphere, blooming into a gently approached vocal choir, symbolising the sound of hope presented by the piano line which eventually wins out.  This best represents the world of Dark Dark Horse; their darkness always weary but never leaden; their often ambient and spooky tunes also often carrying an uplifting moment within the many layers.   ‘Two Gestures’ leads in with soft classical influenced piano, giving the impression that the next eight minutes will be a gently sprawling musical landscape.  Soon enough, Dark Dark Horse settle into their more typical strains of electronica, with a vocal beefed up by a mechanical beat, occasionally reminiscent of New Order’s landmark ‘Blue Monday’ with its stuttering loop and handclaps.  For the perfect mix of electronic and acoustic sounds, the busy ‘Spit Out Regret’ captures the Horse sound extremely well, as a almost circular piano line beavers away beneath a beat which – like a more modern take on The Cure’s ‘Jumping Someone Else’s Train’ – has a near hypnotic pulse which evokes the feeling of movement.  While a great piece musically, this is one of the only times the vocal could be surplus to requirements.  This would have made an excellent shorter instrumental piece, the piano work in particular casting Jamie Ward as the twenty-first century equivalent of Simon Jeffes.

The moods presented on this disc may not always be particularly varied, but the gentle electronic based atmospherics are often not too far short of wondrous.  Between the piano and the various loops, Dark Dark Horse’s tunes often take on a dream like state, leaving behind music that ranks among electronica’s finest.  ‘Centuries’ is everything ‘King of Limbs’ wanted to be…and could have been, if only half of that Radiohead disc hadn’t been clogged up with bewildering, whiny dirges.