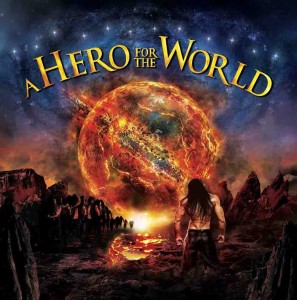 A Hero For The World is a hugely theatrical musical project in the Tobias Sammett/Avantasia tradition spearheaded by to Scandinavian musicians, Jonas Kaasgaard and David Sivelind.  Between them – and, naturally, with a helping hand from a few friends – they’ve created an eponymously titled epic is as big in intent as it is in name.  This particular project plows deep into the power metal/battle metal niche and presents ten tunes with a maximum old-school metallic intensity.

From the off, it sounds as if it will be a particularly solid album.  With a double bass roll, the duo waste no time in throwing themselves into a chorus of multi-tracked harmonies on a big chorus to create a reasonable first impression.  Between the choruses, there are suitably aggressive guitar leads – all adding up to being a decent piece of epic Euro metal.  Despite their musical strengths, listening more closely, Jonas Kaasgaard’s lead voice – mixed slightly louder than the other vocals – sadly proves to be somewhat of a weak link. There’s no denying there’s a power in his delivery, but the more extreme edges of his voice are very hard on the ears.  It’s a huge, natural voice, and of course the fact that he possesses a natural voice should be commended; it appears to be untrained, however, and as the album progresses, it becomes evident that he doesn’t always use his talent in the best way – often singing in a register that, frankly, is too high.  It’s not so bad if he reigns it in – as indeed he does very occasionally on parts of the album – but much like Z P Theart and his band I Am I (whom in many ways are musically similar) there’s no real sense of scale here: for the most part, Kaasgaard’s preferences are towards the loud…or louder still.  As he takes the lead vocal in a brief solo performance at the tracks end – something approaching a near comedic wail – you’ll find yourself wondering if he’s gonna hurt much more of this record with that kind of thing…and, sadly, he does.  Also, before long, the music that once sounded hugely energy driven just becomes all too wearing.  This opening number may be okay within its niche, but for the rest of the album, AHFTW barely let up…it’s hard to imagine anyone making it all the way through this release without tackling it two songs at a time.

The band expand their range very slightly on ‘Eternal Shadows’.  In the vocal department and Kaasgaard still goes for the jugular on some of the more intense moments, but a more atmospheric lower registers show occasional promise.  It’s just not enough to make this work as a whole though, and again, it is with the instrumental sections AHFTW’s best side presents itself. With the vocals stepping away for a few bars, some rather fine twin leads grab the listeners attention in addition to a near faultless lead guitar break.  More classic sounding guitar chops kick off ‘Let It Go’, underneath which droning keys and a choir of voices lean towards the gothic.  Following a good start, Kaargaard starts shrieking  as if his life depended upon it once again, but if you can ignore that (a somewhat difficult task), this number boasts a melodic chorus that has potential to be enjoyable – at least within the confines of the retro metal sound.

The brief glimmers of hope are quashed by the arrival of ‘Heaven’s Eyes’. Cranking things as fast as the band can muster, this number thunders ahead with a full quota of double bass drum pedals, while the lyrics peddle out various clichés about fighting and tomorrow being a new day.  Thankfully, a little musical respite comes via ‘Free Forever’ a huge ballad (sung by Louiebeth Aratan), but essentially, unless you want something that sounds like a poor man’s Tristania or Leaves’ Eyes having a bad day, there’s also nothing here to get excited about.  Moving from the huge and overbearing to the huge and ridiculous, an eponymously named three part suite plods along for almost fifteen minutes, telling the tale of a conquering battle-worn soldier with bombastic tunes to match.  By this point, most people will probably have switched off completely.

Those listeners who spent their teenage years in the 80s hyped up on similar Euro power metal bands may find something of worth here, but even with some great guitar lines and a couple of good choruses, there’s nothing to make A Hero For The World truly stand out (at least, rarely in a good way). On the whole, there are glimmers of good playing, but this album is an absolute chore to listen to; if this band are not content with pummelling your senses with outright speed and a dodgy vocal, they’re throwing out second rate Manowar-isms with a general pomposity that’s bordering upon laughable.  With a bit less bombast and a trained vocalist, this material might have provided a strong basis for something, but as it stands, it’s only going to appeal to a select few.