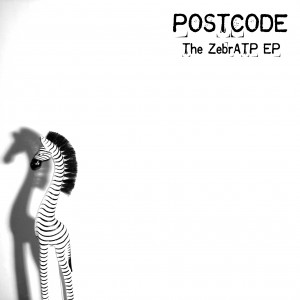 Their 2013 EP presents a departure from those sounds in some ways.  The tunes on ‘ZebrATP’ were inspired by the 2010-12 All Tomorrow’s Parties Festivals and the Isle of Man alt-rockers are in a slightly more reflective frame of mind.  To begin with, the layers and distortion are swept aside, leaving a more naked performance, and it’s a sound often drenched in sadness.

The bass playing during the opening track (‘Reds’) instantly captures the attention, with a very naturalistic sound.  It’s a pity this tune couldn’t manage to do much more of interest, as it lumbers along with clanging chords and a rather flat vocal performance.  It’s really not the Postcode of those earlier releases…  Even with an increase in volume mid-way, it carries on along a rather dull and uninspiring musical path, so leaden that not even the presence of a multi-tracked vocal towards the end adds any real interest. The second track, ‘Fairy Dust’, makes up for any disappointment; here, the band embarks on a more thoughtful arrangement of equal parts slowcore and dreampop.  The cleaner guitars cry out wistfully, the spacious arrangement gives plenty of space for the reverb to fill the room.  Here, Marie Reynolds’s vocal style makes far more sense – sounding somewhat like Kristen Hersh on a quiet day, fronting a band tapping into the slightly louder sounds of Mazzy Star and Kendra Smith.  Had ‘ZebrATP’ surfaced in the early nineties, it’s highly possible this tune would have caught the ear of Ivo Watts-Russell and Postcode could have been destined for the 4AD stable.  In 2013 and on very much a DIY path, it’s great to hear such a strong love for the sounds of nineties alternative rock.

More thoughtful slowcore grooves fill ‘Tregonwell’ and ‘Envy’, as the focus lays squarely on guitarist Mikie Daugherty, on tunes which take a while to register. Those looking for something noisier get their wish on ‘Sunfield’ and ‘Pavilion Song’.  The latter, especially, captures a raw band with a great energy – imagine something between an early, rough Echobelly demo and Velocity Girl and that’s a reasonable ballpark.  For listeners over a certain age, the guitar sound on this particular number is likely to result in an encompassing feeling of nostalgia…and that’s no bad thing.

With ‘Goodbye Minehead’, the EP closes with another downbeat offering.  While the music stands up on its own with a selection of chimes and a slow beat, the title is particularly evocative.  The mere mention of Minehead – tying this EP in tightly with ATPs past – helps the tune capture the essence of the feeling one gets when departing from a festival weekend.  Bonds can be forged between music lovers in a surprisingly short time in such surroundings and the return to the everyday grind is deflating compared to a world of exhilarating music.  In four minutes, Postcode achieves maximum glumness, a feeling heightened by the inclusion of more slightly flat vocals.  Although a world away from Postcode’s earlier sounds, it represents a rather fine – and very mature – end to this collection of songs.

Whether fans of Postcode’s earlier attempts at noisemaking will appreciate ‘ZebrATP’ and it’s downbeat vibe is open to question.  This is the sound of a band growing, stretching and experimenting.  For newcomers to the work of the Isle of Man quartet, this may seem a patchy release, but it’s worth investigating for ‘Fairy Hill’ and ‘Sunfield’ alone – tunes which showcase both ends of the band’s musical spectrum.  The whole EP can be streamed below.