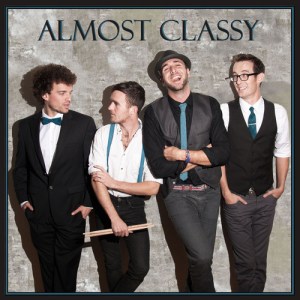 Almost Classy – a four piece outfit comprising members from all over the US – bring various elements of classic pop rock together on their debut EP.  Music fans will be about to pick out a myriad of influences throughout these five tunes and the active nature of the band’s arrangements are such that different people could well hear different things, but somehow Almost Classy blend their influences into a wholly enjoyable package that sounds like the work of a band far better than mere copyists.

Beginning with something incredibly upbeat, ‘Killer’ has a strong rootsy pop feel, placing Almost Classy somewhere between early Blues Traveler and King Washington.  The groove carries a strong melody over which the four members indulge in various styles of vocal harmonies. The chorus appears slightly repetitive at first, but that’s quickly forgiven due to the sense of energy the track delivers.  While all of the number’s elements bring something of interest to the table, it’s the overtly busy lead guitar work which links everything together; its slight calypso grooves call to mind Talking Heads’ ‘Nothing But Flowers’, while parts of the main riff are subject to delay effects.  Even with a 311-esque reggae break shoehorned in for a mid-section, nothing here ever feels overdone.  In all, it is a well-played, enthusiastic offering.

With such a complex opener, there was always a chance that anything following could fall short of the mark.  While the other four tunes sometimes appear a touch more ordinary, they are equally strong in their own way. During ‘Sunrise’ the band settle back into the use of busy vocal lines, which against a slightly slower arrangement brings a hint of Barenaked Ladies, but fans of that band won’t find any other really strong influence.  The busy roots rock pushes the guitar more into the foreground at first, while the main bulk of the piece settles for a solid radio friendliness, before a set piece near the end is designed – once again – to highlight this quartet’s gift for a tight harmony.  The gentler rhythmic style over all makes this a little more accessible on first listen.  The band shifts towards sunny Californian pop/rock during ‘City In The Sun’, a tune leading off with a superb bassline.  Each of the previous influences can be heard in passing, while the increased use of bass hooks calls to mind the pop-reggae side of Sublime.    In terms of summer grooves, this tune is a sure fire winner as Almost Classy mix soft reggae and funk elements with shimmering pop harmonies.  Topping off an already great number, a slightly more aggressive lead guitar break brings everything to a suitable climax.

Just as you feel you’ve got Almost Classy’s general sound pegged, they through in a curveball on their last couple of tunes.  For ‘I’m That Man’, any previous funkiness steps aside in favour of a more alt-country tune, where the four-part harmonies and driving rhythms recall recordings by New Orleans cult heroes Cowboy Mouth.  More hints of alt-country sit at the heart of ‘More Than Lovers’, a semi-acoustic workout with more impeccable harmony vocals and the welcome addition of old fashioned organ underpinning a country-pop sound, tipping the hat to the softer end of Hootie & The Blowfish.  Between this tune and the far more multifaceted ‘Killer’, the pairing shows off the broad range of Almost Classy’s talents.

In short, this debut release features five genuinely great numbers.  Whatever the musical slant, there are strong hooks and good playing from all concerned.   With just the right balance between easily accessible tunes and muso gusto, it’s a shame this wasn’t a full length.